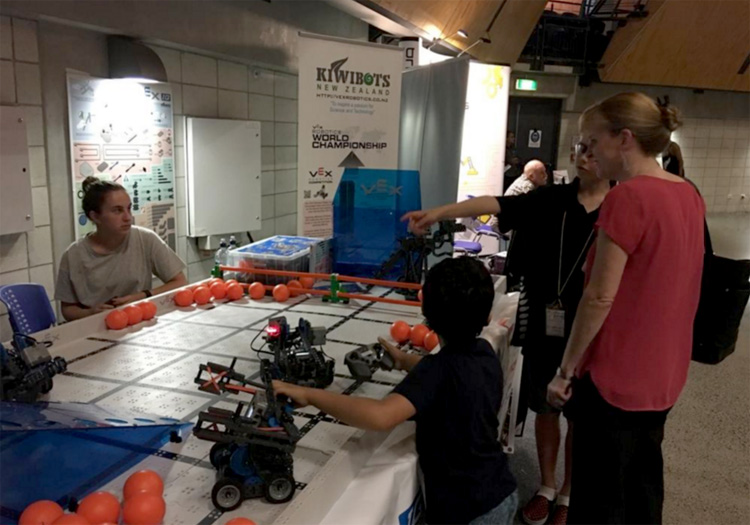 Consul General Melanie Higgins learning about robotics from those in the know. Photo credit: U.S. Department of State.

The United States is the largest outside source of investment in New Zealand sciences. Environment, science, technology and health issues are critical not just to the economic wealth, but the health and survival of us all. From cutting edge research on space between NASA and Kiwi astronomers, to the friendly annual youth robotics competition, American and New Zealand scientists and innovators are constantly working side by side.

The U.S. Embassy has supported many Science, Technology, Engineering, and Mathematics (“STEM”) initiatives over the years in New Zealand. This support ranges from programs like the Vex Robotic Competition to  major U.S.-New Zealand Antarctic cooperation, which supports ANDRILL deep drilling project that has created the southernmost windfarm in the world.

The Consul General was pleased to see the robots created by schools across the country and join in the excitement of the competition. She also got together with key sponsors of STEM initiatives in New Zealand, meeting representatives from organizations included Kiwibots, KiwiSpace, Aquabots, Brightsparks, Aerospace Education, House of Science, The Mind Lab, Autodesk, SMC, Fuji Xerox, Massey University, Unitec, WelTec, CPIT, AUT, NZTech, Four Winds Foundation, and AURA.

Overall it was a great day of hands-on science, competition, and fun!