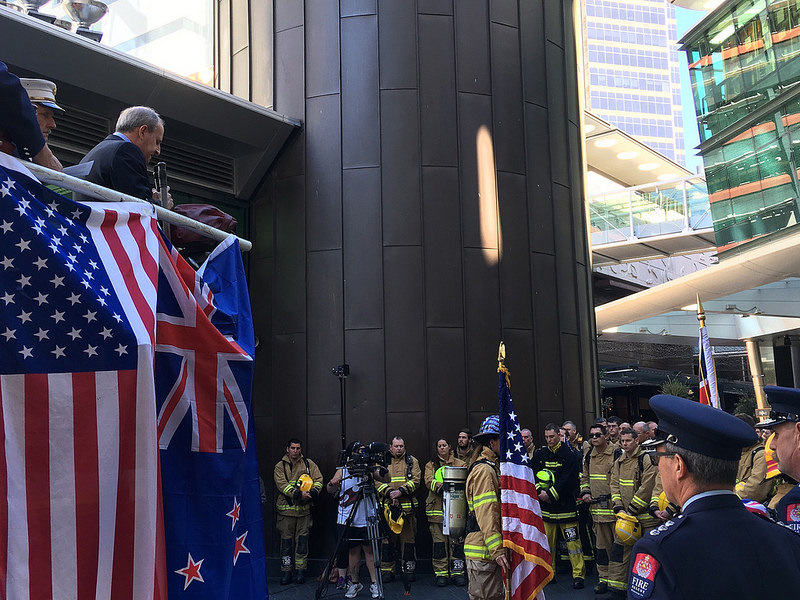 In Auckland on Sunday, September 11th, more than 160 firefighters, joined by U.S. Ambassador Mark Gilbert, climbed the stairs of the Sky Tower in memory of firefighters lost in the September 11 World Trade Center attacks, as well as those New Zealand firefighters who have lost their lives in the line of duty.

This year marks the 15th anniversary of the September 11 attacks, and New Zealand firefighters were the first in the world to hold a memorial event on the day, with New York firefighters tuning in from the United States to watch a live stream of the New Zealand event at their local firehouses.

Tony Scott of the Auckland Airport Rescue Fire Service started the memorial climb following the 2009 cool store fire in Tamahere, Hamilton, where several Kiwi firefighters lost their lives. The event sees firefighters from around New Zealand and the United States come together to remember those lost; a nod to the fire service’s strong sense of camaraderie worldwide.

New York Firefighter Chief, Steven San Filippo played a key role in the rescue operations at ‘Ground Zero’ following the World Trade Centre attack, attended the event and participated in outreach activities to schools and fire stations throughout Auckland in the week leading up to the event. This is the second year the event has been held at the Sky Tower.

More photos from the Memorial Service in Auckland.

I was honored to represent President Obama and the American people at Sunday’s Memorial service in Christchurch to remember and honor the victims of, and first responders to, the terrorist attacks on September 11, 2001.

The morning was eerily reminiscent of that one fifteen years ago, with the kind of bright blue cloudless sky that we all remember from watching the horrifying footage of the attacks unfolding.  I was moved powerfully by so many things about the ceremony yesterday: the silent devotion of the fire fighters of Christchurch assembled to honor the 343 of their professional brethren who died on 9/11 in the United States, and the 127 who have died since then as a result of injuries or illnesses incurred in responding to the attacks; the striking riverside memorial sculpture made up of twisted steel beams from one of the Twin Towers; the sight of the U.S. and New Zealand flags hanging side by side on the bridge nearby; the supportive words of Mayor Lianne Dalziel and her fellow Cantabrians and transplanted Americans, commemorating the losses of that terrible day.

Through the solemnity, I was reminded again of the strength of what our two countries share: our commitment to tolerance and freedom, to honoring diversity and overcoming adversity.  Together, we honored not just the memory of the brave men and women who responded to the attacks in the United States, but also those 57 Kiwi firefighters who have lost their own lives in the line of duty.

It was a privilege to be part of the first commemoration of 9/11/2016 in the world, in a city that has also witnessed great devastation — and manifested great resilience.  Thank you Christchurch for taking care of this very special memorial, and for cherishing the memory of the many innocent victims of the tragic attacks of 9/11.

I will always remember your memorial service, punctuated by the soft sounds of the river flowing just below us, and the mournful notes of the bagpiper playing Amazing Grace just above.

More photos from the Memorial Service in Christchurch.

President Obama, 15 Years after the Attacks on September 11.

September 11 – Remarks by the Secretary of State, John Kerry.