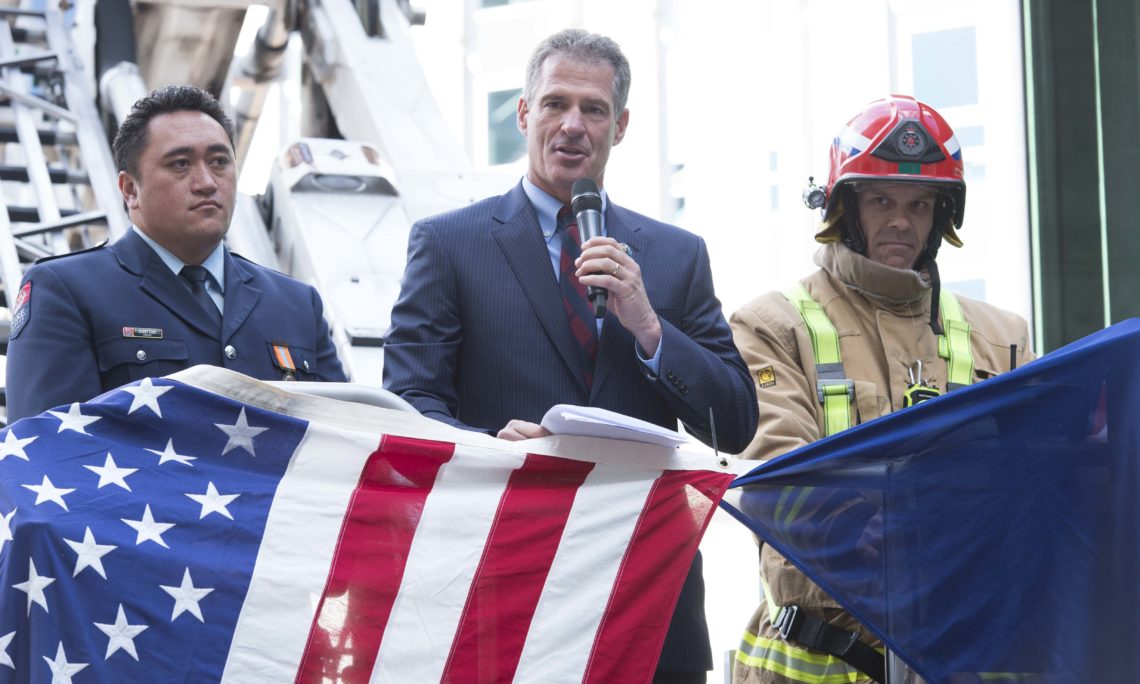 This Monday, September 11th marked the 16th anniversary of the September 11 attacks in the United States.  Each year in New Zealand the tragedy is remembered by firefighters from around Aotearoa with a Memorial Climb of Auckland’s Sky Tower and a memorial event in Christchurch.

In a moving tribute, representatives of the FDNY and Fire and Emergency NZ read aloud the names of the lost, New Zealand firefighters performed a Haka,   and U.S. Ambassador Scott Brown gave remarks and read letters of thanks from the United States.

In his remarks, the Ambassador noted:

This ceremony, the climb of Auckland’s Sky Tower, and the participation of so many brave men and women serves as a testament to the strength of the relationship between our two nations.  But more importantly, it serves as a reminder of the brave heroes, heroes like you, who serve every day to keep our homes, our families and our communities safe. On behalf of the American people, I would like to express my deep gratitude to Fire and Emergency New Zealand and all those here today for giving their time for this commemoration.  We thank you.

Americans around the world appreciate the poignant efforts of Kiwis to commemorate September 11. Ambassador Brown was able to relay the heartfelt thanks from New York Fire Commissioner Daniel Nigro, who expressed his sorrow and pride for the FDNY in what he describes as their, “darkest day and finest hour”. In his letter, Commissioner Nigro expressed his immense gratitude for the support, remembrance and commemoration paid to the FDNY and the United States from the other side of the world. In addition to relaying messages from those in the United States, Ambassador Brown recognized the continuous dedication of Tony Scott and Fire and Emergency New Zealand.

Representing the FDNY, Battalion Chief Steven San Filippo and Chief Peter Hayden, who both played integral roles in the immediate response on the scene at Ground Zero, read the names of the 343, and gave their sincere thanks to New Zealand.

Closing the formal service, Bishop and firefighter Ross Bay read a closing prayer before a powerful Haka and bagpipe performance for the families of firefighters who gave their lives in service.

Joining Ambassador Brown for the climb was Diplomat Craig Halbmaier from the U.S. Consulate General and American firefighter Jasper Stenstrom – all undertaking the climb in in full firefighter protective gear with external air tanks.

With the event now in its ninth year, the event has grown to its largest to date. Deputy Crew Chief Tony ‘Scottie’ Scott started the memorial climb following the 2009 Tamahere cool store fire, where several Kiwi firefighters tragically lost their lives.

More photos from the Memorial Service in Auckland.

The recognition of the losses of September 11 are also recognized elsewhere in New Zealand.  U.S. Embassy Public Affairs Officer Dolores Prin attended the September 11 Service in Christchurch, held annually at the “A Tribute to Firefighters” memorial – constructed of five steel girders pulled from the World Trade Center rubble following the attacks.

Unveiled in 2006, the monument stands as a symbol of the bond between the U.S. and New Zealand, and to the firefighters lost in the World Trade Center terrorist attacks, as well as to fire service personnel who are lost in the line of duty worldwide.

Ms Prin also took the opportunity to thank the brave men and women in the service of Fire Departments, both in New Zealand and the United States, who put their lives at risk every day to ensure the safety of the members of the public.  She noted it was an honor to be part of a commemoration from a city which has also witnessed devastation but has resiliently stood in defiance against greater odds, and prevailed.