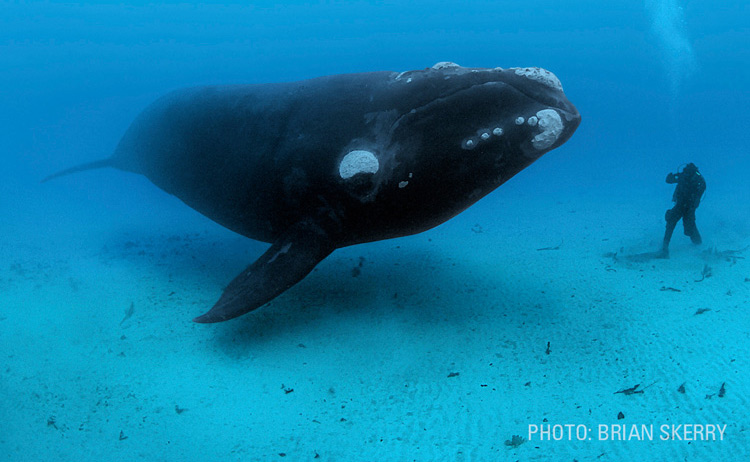 We caught up with acclaimed National Geographic wildlife photographer Brian Skerry ahead of his visit to New Zealand, Australia and Singapore to headline the winter series of National Geographic Live Pacific coming to Auckland and Wellington in October (details below). He talks with us about some of his most memorable experiences and what drives him in his work.

What is the single most important piece of non-essential gear for you to have in the field, and why?

I would say that my satellite phone is perhaps most important. I bought this in 2008 and take it with me on nearly every assignment. I use it to call home or NGM headquarters from remote locations, such as on a ship far out at sea. It’s wonderful to be able to communicate with family or my editor and it gives me peace of mind knowing I have this with me.

What’s your favorite snack to take in the field? (Does your subject matter or environment ever limit your food choices?)

My environment definitely dictates what snacks I can bring with me in the field. And my choices have evolved over the years. I remember a period when I loved Fig Newtons, but these days I often bring fresh fruit or maybe Kind Bars. And I always love to have chocolate with me. Even on days when everything is going wrong, a piece of fine chocolate makes it all a little better!

Complete this sentence: When I started working with National Geographic, I never thought I would be ….

A conservationist. This wasn’t really on my radar in the beginning. But there’s been somewhat of an evolution in my career, in that I have seen many problems occurring in our world’s oceans and as a journalist I felt a sense of responsibility and a sense or urgency to cover these issues as well as the celebratory stories.

What is the most breathtaking view you’ve enjoyed while in the field? In your response, tell us where it is and why you ended up there.

I’ve had so many extraordinary views out there and its nearly impossible to select just one as the most breathtaking. Among the many, one that stands out was being on the pack ice in Canada’s Gulf of St. Lawrence with harp seals. I was photographing a story on harp seals and was living for weeks aboard a 65-foot, steel-hulled crab fishing boat. We used the ship like an icebreaker and I was able to live amongst the seal herd day and night. I can remember sunset in this place; no one around for miles, only thick pack ice speckled with seals. It was very cold and the ice glistened with the disappearing sunrays. Harp seal pups lay on the ice crying for their mothers and the moms emerged from breathing holes and crawled towards their pups. It was a pristine, icy wilderness and I wanted to soak up every sight, sound and smell. Truly amazing!

What is the most treacherous terrain/environment or unpredictable situation you have encountered?

There have been a lot of unpredictable situations, from being under polar ice to deep dives in the North Atlantic. But I would say that perhaps some of the most risky situations have been while diving in the open ocean, far from land. These places are not very forgiving and one mistake can result in tragedy. Strong currents can be difficult to swim against and if you surface away from the boat, you might drift away and never be seen. Years ago I surfaced from a dive in Ireland and wasn’t seen by the boat. I drifted for 2 ½ hours in the Atlantic, in my drysuit, not knowing I’d be rescued. Eventually, I was picked up by a fishing boat. But on some expeditions, like those in the middle of the Pacific, there is almost zero chance of being picked up if you drift away. You really have to be vigilant on those dives and pay attention to every detail. No room for error.

What is the most important piece of advice for aspiring photographers?

Pursue your passion, never quit and have a plan. I think it is so important for young photographers to develop a strategy to get from where they are today to where they want to be in several years. Come up with the steps necessary to achieve your goals and understand exactly what it takes.

Who determines the brief of a project? How much flexibility do you have, as your subject matter can be so unpredictable?

Nearly every story I photograph for NGM is my idea. I select subjects that interest me or stories that I believe need to be told. I discuss these with my editor Kathy Moran and together we craft the proposal. Once we have the story approved I write a coverage plan that outlines what I hope to photograph. But things do change sometimes once I’m in the field and I do have flexibility to alter the coverage. I’m in pretty frequent contact with Kathy and we make decisions as things evolve.

What drew you into underwater photography?

What message would you like to share with the world about ocean conservation? What are the main environmental problems threatening our marine life?

There are many problems facing the oceans today. Some of the most damaging include: Over Fishing, Loss of Coral Reefs, Acidification, Plastics.The real game changer is climate change and many of the above items are influenced directly by this.

Dive deep into the world’s oceans with one of National Geographic’s most seasoned photographers. Watch as Brian Skerry’s images illuminate the vast, hidden world beneath the waves.

Brian has spent more than 10,000 hours underwater using his camera to tell the story of some of the ocean’s most elusive inhabitants. His mission: to enlighten and inspire people to care about the beauty, bounty, and health of the world’s oceans.

Often Brian’s office is icy, predator-infested water and his uniform a 7mm neoprene wetsuit. Some may see this as inhibiting, but he consistently delivers thought-provoking and captivating images that offer a unique and intimate portrait of the creatures from the deep, and draws attention to the large number of issues that endanger their existence.

Join him live on stage for an intimate look at dolphins’ intelligence, hang out with the endearing Arctic harp seal, and circumnavigate the globe in search of the world’s most endangered whale, the right whales.

On stage, Brian is a passionate spokesman for the oceans he loves to photograph. His riveting presentations inspire reverence for the marine realm, and most of all, they offer hope for protecting the vitality of the world’s oceans.