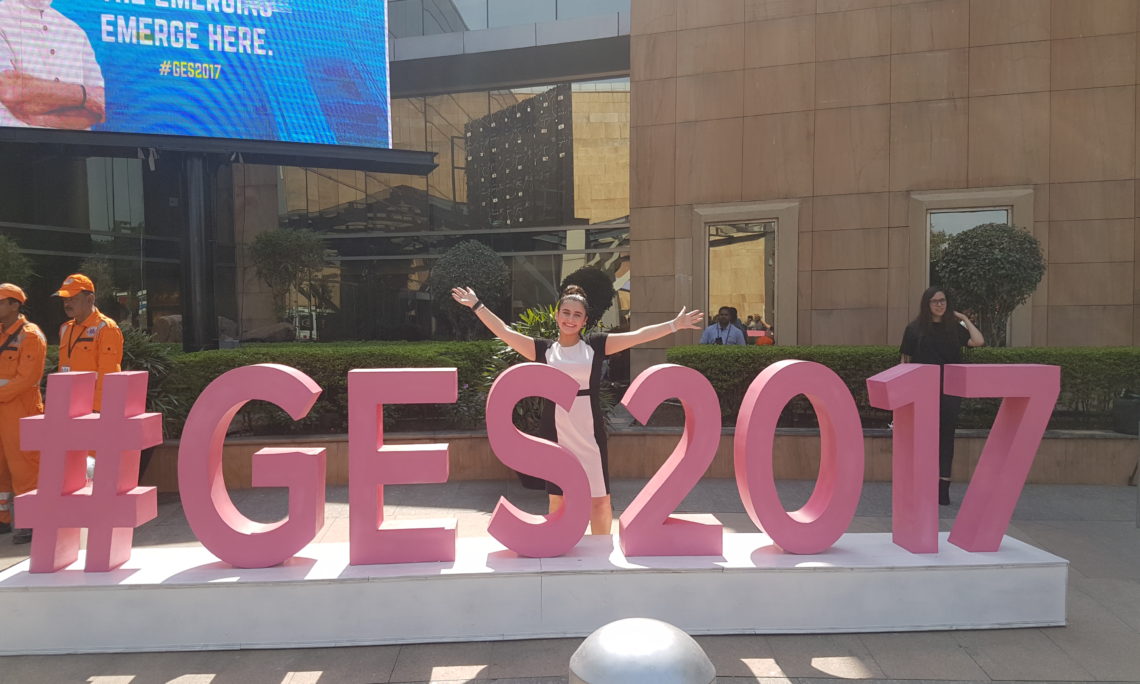 We highlighted Jessica’s experience last week. Next up, Alexia…

I was so excited to represent New Zealand at the Global Entrepreneurship Summit in Hyderabad. This was to be my first trip to India; I was about to meet global changemakers such as Ivanka Trump & Prime Minister Modi;  and the theme was ‘Women First- Prosperity for all’.  As the CEO of GirlBoss New Zealand this ticked all my boxes and then some!

Ivanka Trump spoke at the Opening Ceremony and her focus was on the importance of encouraging women into STEM careers. When she spoke of the importance of ensuring young women were prepared for the fourth industrial revolution it was like the words were straight out of my mouth!  It was totally unreal and I had to pinch myself; it was a great validation of my work at GirlBoss.

One of the key themes of the conference was the importance of empowering women as a means to alleviate poverty. This was emphasised by Ivanka Trump who said, “When women work it creates a multiplier effect. Women are more likely to hire other women, and to give them access to capital, mentorship, and networks . In addition, women are more likely to reinvest their income back into their families and communities”. Prime Minister Modi, too,  was firm in his belief that progress and humanity are incomplete without the empowerment of women.

The second key takeaway from the conference was the importance of technology as an enabler. India has the world’s second largest internet population with over 400 million users, but only 30% of these users are women. In rural India, only 1 out of 10 internet users is a woman. A solution to this is Google’s ‘Internet Saatchi’, an initiative to use women as digital educators. This idea was introduced to me by the CEO of Google India, Sundar Pichai, who led one of the workshops I attended. Through Internet Saatchi, women in rural India are given smartphones and complete training on how to access and use the internet. This knowledge is then imparted to their community and neighbouring villages.

The story of 20-year-old Laxmi Rani demonstrated the power of ‘Internet Saatchi’ in action. Despite criticism from the men in her village, Laxmi signed up to the programme, even though she had never even held a smartphone before. She started by searching for new food recipes and learning to take selfies. She helped her village by using the Internet to find the most productive farming methods and finding important news to share. She boosted economic opportunities for women in neighbouring villages by researching new stitching designs. She also taught other women to use the devices. But her proudest moment came when she was able to stop an incident of child marriage in her village by showing the parents the laws related to child marriage, as well as additional information on how harmful it is for the girl. It was an eye-opener to me that a smartphone, something we take for granted in New Zealand, can radically transform the lives of people living in developing countries. My dream is that the GirlBoss New Zealand members can grow up to be the next generation of technology CEOs who create technological solutions to improve the lives of people across the globe.

The most powerful thing about the Summit was the sense of community. It was one of those places where the energy is so unique and all encompassing it can just not be described. The entire conference was buzzing with a feeling of belonging, a feeling that the delegates matter to one another and to the group, and a shared belief that together we could create a genuine positive difference.

Through the Summit, I learnt that now is the time to speak up to our respective governments in favour of economic advancement for women. In New Zealand this means all of our young people being equipped for the future of work. I also gained a global perspective, realising that we must all work together to ensure equality and opportunity across and between nations. My hope is that the 2017 Global Entrepreneurship Summit hosted in Hyderabad, India, will be a vital step in achieving this potential.