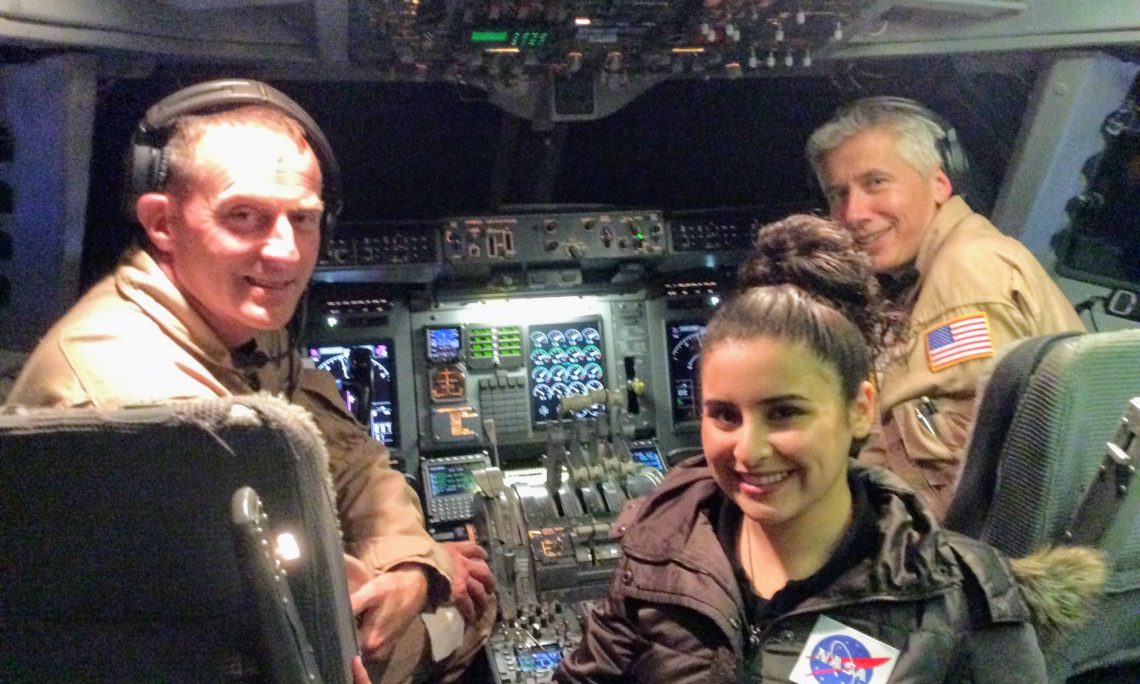 I was chosen by space agency NASA to ride on-board their 747 jumbo jet aircraft during a special overnight mission.

In one 10 hour flight, I travelled at -70C and zero per cent humidity while measuring stardust and taking in the breath-taking displays of the atmosphere, such as the the Aurora Australis. I was extremely grateful to be selected for such an out of this world opportunity.

The flight left from the US Antarctic terminal the night of Friday 14 July and travelled at 45,000 ft towards Antarctica over the Southern Ocean. At maximum altitude, the rear of the airplane opened to allow for scientific observations.

On the trip NASA organised opportunities for us to talk to scientists at the various workstations including the Mission Director, science flight planner, telescope operator, science staff and flight crew.

I was pleasantly surprised to learn how passionate both the male and female NASA scientists, were about getting more women into these fields.

NASA’s SOFIA is the world’s largest flying observatory based out of California and the Boeing 747SP jetliner is modified to carry one of the most powerful telescopes in the world with a 100-inch diameter. The data provided by SOFIA ‘cannot be obtained by any other astronomical facility on the ground or in space’.

I was selected by the United States Ambassador Scott Brown in part because of the advocacy work I do in the scientific sphere, as the founder of Girlboss NZ.

Meet Alexia Hilbertidou, the 18-year-old founder of GirlBoss and theyoungest person to be involved with NASA’s SOFIA mission
GirlBoss takes flight with NASA on SOFIA observatory 747
Young influencer heading for the stratosphere
GirlBoss’ founder is the youngest person ever chosen to go on a NASA SOFIA mission
Alexia Hilbertidou: ‘Young women can’t be what they can’t see’
To infinity and beyond! Girlboss & NASA!
Meet the Auckland girl who’s flying into space with NASA