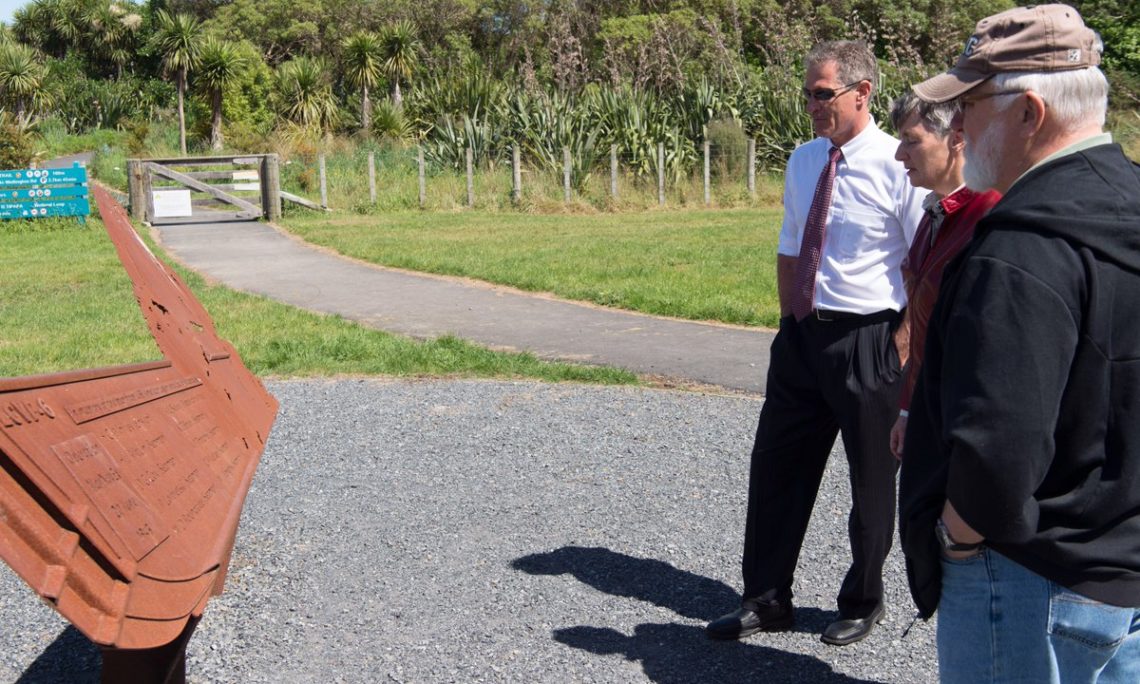 After the short stop at Old St Paul’s the party carried on to the Kapiti region, north of Wellington on the west coast where they met with the chair and members of the Kapiti US Marines Trust, a community group committed to keeping alive the memory of the Marines who were camped in that area in 1942

On November 2nd, Ambassador and Mrs. Brown were joined by USMC General Cavanaugh’s wife, Mrs. Sherry Cavanaugh for their first visit to a number of Marines heritage sites in the Wellington region. The group began the day by touring Old St Paul’s, the church in Wellington city that was frequented by U.S. Marines and other servicemen during WWII. There they met local families and were invited into Kiwi homes. The church permanently flies a WWII-era 48-star American Flag and a USMC Flag, gifted to the community when the Marines departed. The Embassy and the local New Zealand American Association hold an annual Memorial Day service at Old St Paul’s. While Ambassador Brown has visited Old St Paul’s, it was a first visit for Mrs. Brown and Mrs. Cavanaugh. It was a great day to visit with the church full of American and other international tourists on a stopover in Wellington as part of their Pacific cruises, who were pleased to meet the ambassador during their stay.

After the short stop at Old St Paul’s the party carried on to the Kapiti region, north of Wellington on the west coast where they met with the chair and members of the Kapiti US Marines Trust, a community group committed to keeping alive the memory of the Marines who were camped in that area in 1942 and 1943. The young Marines outnumbered locals 15 to 1 during that time and had a huge impact on the small village of Paekakariki – they were well-groomed, good mannered, and brought new things like baseball, hamburgers, Coca Cola, Hershey’s kisses and nylons! Trust Chair Jenny Rowan and members Larry Keim and Allie Webber showed Ambassador Brown the railway station where the Marines had arrived, the village where they had been to dances, shopped and made friends, the Marines Memorial in Queen Elizabeth Park (formerly Camp Russell) where the annual Memorial Day service is held and the entrance to Whareroa Farm (formerly Camp Mackay) where there are still several relics from the camp, buried, and where the Marines marched over the hill – a route now immortalized by an annual ‘In the Footsteps of the Marines’ run and walk each May. A highlight of the tour for the group was seeing the Trust’s latest project, a restored Marines hut from the WWII period. The hybrid of several huts was dismantled over the past year and rebuilt to original plans by a local volunteer organization, the Menz Shed and relocated to Queen Elizabeth Park. Ambassador and Mrs. Brown enjoyed looking inside the hut and the ambassador commented that he’d slept in smaller spaces during his own time in the military.

The ambassador expressed his gratitude for the Trust’s dedication to the memory of the young men who were welcomed so warmly as part of the Kapiti Coast community during WWII and looks forward to visiting again and participating in future events there.