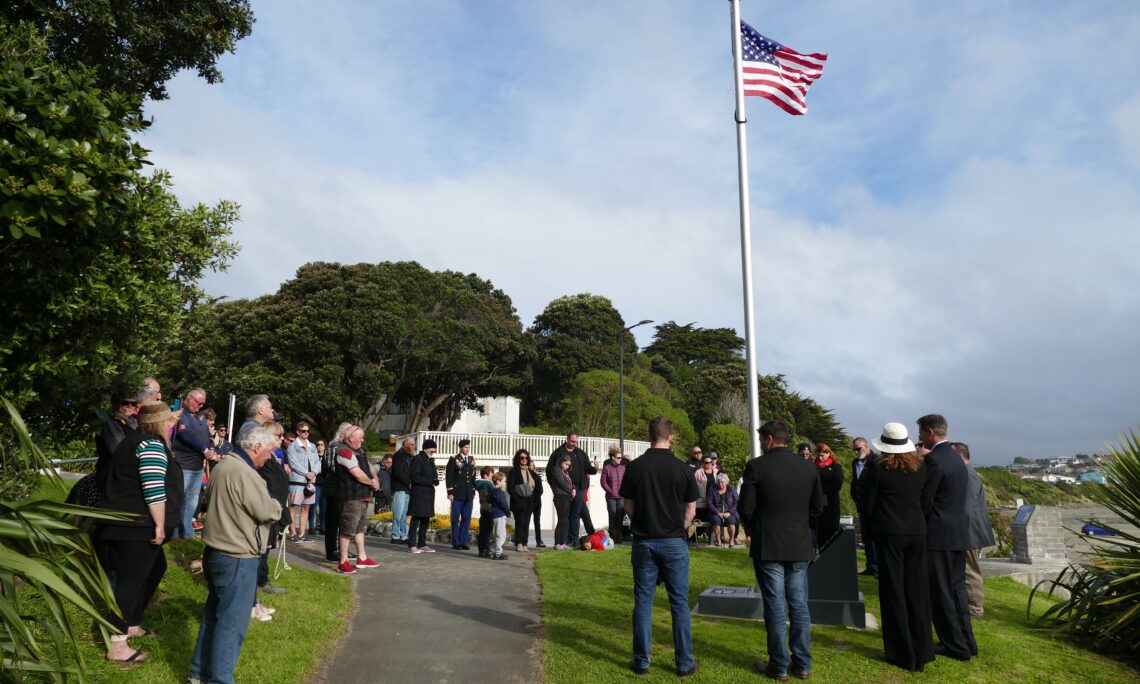 On 3 October 2020, U.S. Ambassador Scott Brown and Mrs Brown had the privilege to join Simon Strombomand, President of the Titahi Bay Royal New Zealand Returned and Services’ Association (RSA), and RSA members at a dedication ceremony at the Titahi Bay Cenotaph to unveil plaques in honor of the 1500 US Marines who lived and trained in Titahi Bay before departing to take part in the World War II Battle of Tarawa a few short weeks later.

The Marines stationed in Titahi Bay came from all parts of the United States and had a variety of experience. Some had just returned from fighting in Guadalcanal, in need of some much-deserved R&R. Others were fresh out of training, barely 17 years old and away from home for the first time in their young lives. Each of those brave Marines, though, knew that they would soon embark on the toughest and largest operation in the Pacific to date. On the island of Tarawa, they faced 5000 well-fortified enemy soldiers who had had four months to prepare their defense. At 0900 on November 20, 1943, the 2nd Marine Division began the assault on the northern beaches of Tarawa. The battle lasted seventy-six grueling hours and was marked by some of the heaviest fighting of the campaign. Over one-fourth of the 12,000 Marines who took part in the successful attack had been killed or wounded, many of whom had spent months in Titahi Bay.

These young Marines gave the ultimate sacrifice for their country in the name of freedom. During the ceremony, Ambassador Brown remarked “Not only do I want to honor those who served here, but I want to honor those who made our Marines feel at home. The residents of Titahi Bay and the greater Porirua community gave these young men and women a temporary break from the ravages of war in the Pacific. They invited these strangers into their homes for meals, spoiled them with New Zealand milk and ice cream, and introduced them to fish and chips. Many of the Marines and residents made long-lasting connections with their host families that continued long after the war ended, which shows just how much the time in Titahi Bay meant to those kids, so far from home”.

“Service to your country is something I feel strongly about, and my hat is off to all of that served and to all of you who supported our Service Members. I was privileged to serve and wear the uniform for 35 years as a member of the National Guard, along with service to our nation as an elected Senator, and now as Ambassador—I know what it means to serve others, and I understand what it means to have the support of a strong community like yours.”