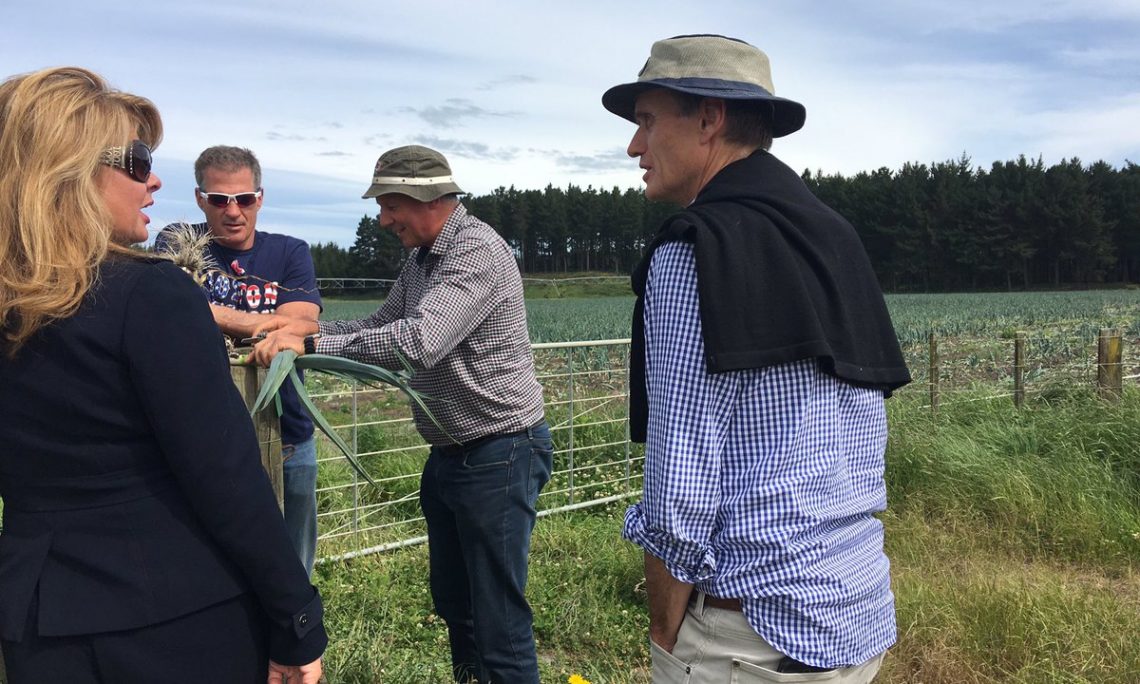 One of the greatest Kiwi traditions is the summer road trip.  Well, it might not be summer just quite yet, but in the spirit of this celebration of the season, Ambassador and Gail Brown jumped in the car and headed off up the island this week, to the heartland of the lower North Island, the Manawatu District.

The plan for the day was to investigate what makes this region and its people tick, and to meet with leaders in industry, local government and technology.

First stop in the mighty Manawatu was the BCC (Building Clever Companies).  The BCC is a truly amazing organization. Imagine a startup, solely for agriculture, agritech and agrifood. Organizations like this are becoming more and more common around the world, as the worldwide farming community, as well as the rest of the population, begin to recognize the importance, and the impact, of farming and food production in so many aspects of our daily lives.  Ambassador Brown met with International Relations Manager Toni Grace and Dave Craig, BCC’s Marketing Manager, and had a chance to chat with the startup teams over coffee and cake.

After that, it was off back into Palmerston North, where the Ambassador was delighted to see Palmerston North’s charismatic Mayor Grant Smith again. The two had met at a function in Wellington and Grant invited Ambassador Brown to visit the city. Today’s visit was the perfect opportunity for the Ambassador to accept that invitation, which he was delighted to do.  Mayor Smith and the Ambassador talked about the region and the challenges of balancing primary industries, which are Manawatu’s biggest investment, with the needs of the environment and local wildlife.  This is something that Mayor Smith is especially dedicated to and Ambassador Brown shares his commitment to a sustainable future.

Our thanks to Amanda Linsley, the Coachman, and the Chamber of Commerce for hosting us for lunch. Amanda is the current Chief Executive of the Manawatu Chamber of Commerce and until 2012 she worked with Vision Manawatu, the regional Economic Development Agency. Unsurprisingly she had a lot to share about economics and commerce in the region. Other participants at lunch represented a wide spectrum of business owners, influencers, and industry leaders. Great food and great company.

After indulging at lunch, it was back on the road to Feilding and a meeting with Manawatu District Mayor Helen Worboys, and representatives of U.S. firms Proliant and Cirrus Aircraft.  It was fantastic to have a chance meet with two companies making the most of our close economic ties.

The next two stops on our whirlwind visit encompassed the full “field to plate” experience of the sheep farming industry.  We approached this a little backwards, visiting the ANZCO Food meatworks first, then heading out for a quick farm tour of Waitatapia Dalrymple Family Farm in Marton.  The meatworks was an education, and having the opportunity to get hands-on picking leeks with Hew Dalrymple was great fun.

Then it was off to see the Downs Group’s extraordinary transformation from small town electrician to world leader in off-grid alternative energy sources. We had some great conversations with Robert Gunn, the Managing Director, about US components and possible applications in New Zealand, the US and around the world.

Next stop was dinner with Marton Mayor Andy Watson and his wife Beth. There is widespread consensus that Beth’s chicken pot pie is best around and the Ambassador’s wife Gail remains concerned that he will never eat her version again.

We recognize that Senior Prizegiving is one of the most special evenings in the school year. It was an opportunity for the school to acknowledge their students’ academic, sporting and cultural successes, award scholarships, acknowledge their 2017 heads of school, and bid farewell to the year 13 students. The impromptu haka was spine-tingling and a tribute to the respect that the students have for each other and their pride in their school.

All in all, it was a fantastic day, learning about the Manawatu Region and the diversity of the people and businesses that call it home.  Agriculture and innovation are core components of both the U.S. and New Zealand economies, and spending the day investigating the ways we’re already working together, and looking ahead at the endless possibilities for future cooperation between our two great nations, made for a pretty much perfect day.