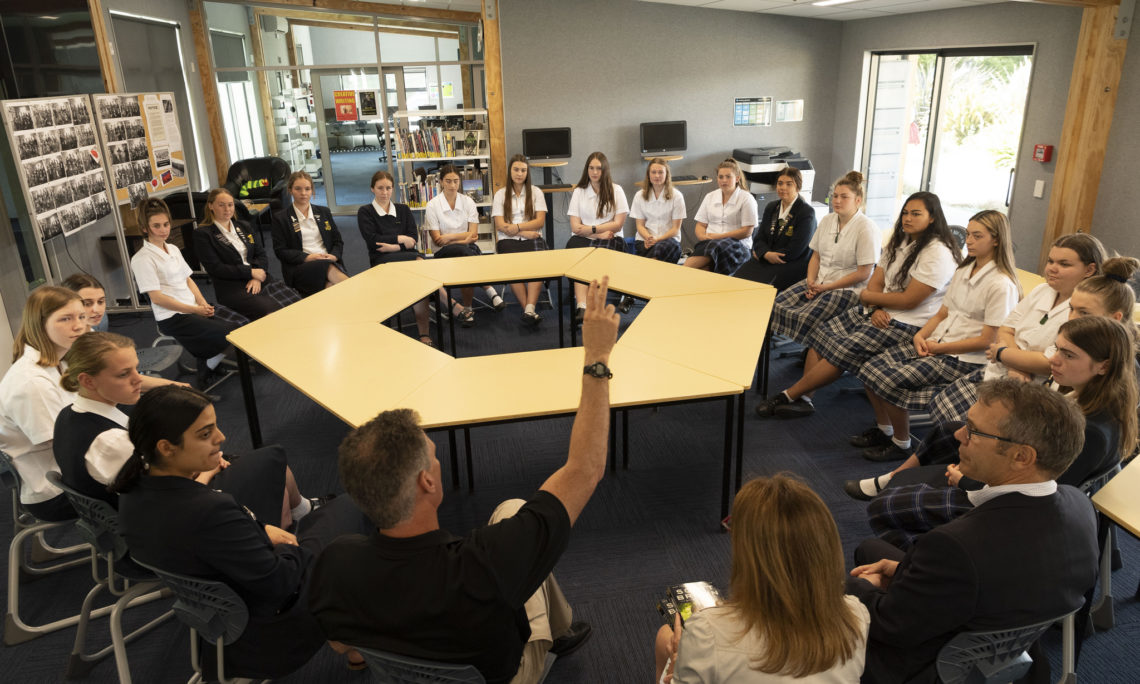 Ambassador Scott Brown enjoyed his first visit to Blenheim and the Marlborough region as part of his ongoing program of outreach to the provincial centers of New Zealand.  He was met by guide for the day, local Member of Parliament Stuart Smith, and kicked off the visit with a courtesy call at the Regional Council Chambers with Mayor John Leggett and Gerald Hope, the Chief Executive of the Marlborough Research Centre.  Ambassador Brown was fascinated to hear about Marlborough’s positive economic and social development story.  He then spoke to a local media outlet – the Blenheim Sun.

On visiting a local secondary school, Marlborough Girls’ College, the Ambassador was welcomed in a moving mihi whakatau (Māori welcome ceremony) – including a beautiful waiata (song) performed by the students.  He was then quizzed on world affairs and the U.S.-NZ relationship by the young women from the senior classes of the College in a roundtable discussion session.  Ambassador Brown was particularly keen to promote STEM subjects (science, technology, engineering, maths) to the students, given the U.S. had recently made internships at NASA available to NZ students.  The opportunities in space science were huge for young New Zealanders, with 180 high-paying jobs available at U.S.-NZ Rocket Lab alone, Mr. Brown told the group.  The Ambassador enjoyed meeting this smart and polite group of future leaders.

At a business luncheon on the stunning Allan Scott Estate, the Ambassador learned more about what keeps the local economy growing.  Aside from grape growing and wine production, representatives from sectors such as construction, tourism, agriculture, and finance also briefed Mr. Brown on their respective areas.  The Ambassador, in turn, showcased to the group opportunities for NZ businesspeople in the U.S. that had been created through the passing of the KIWI Act – which made it easier for investors and entrepreneurs to travel between the two countries.

The Ambassador then visited the Omaka Aviation Heritage Centre – a wonderful charity which lovingly restores and preserves vintage planes, including some unique examples of our shared military and flying heritage.  Of particular interest were American planes such as a rare Curtiss flying boat from World War One, a former U.S. Army Air Corps Boeing Stearman trainer biplane, and one of only two surviving Airco DH4s in the world.  Ambassador Brown got to pilot the world’s last flying Avro Anson bomber of its type on a short flight, and to drive a Korean War style jeep, before thanking the museum trustees and curators for the care they were taking of some precious taonga (treasures) which mean a lot to both countries.

In keeping with the aviation and defense themes, Mr. Brown then undertook a visit to Royal New Zealand Air Force (RNZAF) Base Woodbourne.  As well as inspecting the training workshops where recruits were learning how to maintain the RNZAF’s aircraft and helicopters, the NZ military hosts had a couple of special treats in store for the Ambassador.  He was given an opportunity to test the flight simulators – configured for his home town of Boston, Massachusetts.  Then, he tried the virtual reality training systems for ground movements and taxiing – with a simulation of the soon-to-arrive Boeing P-8 Poseidon maritime patrol aircraft, which had been digitally decked out in the future RNZAF P-8 livery.  Ambassador Brown congratulated the RNZAF for choosing the high quality P-8 option as their maritime patrol replacement.  He thanked the base team for the tour, for their service, and for the excellent co-operation which U.S. forces enjoyed with the NZ Defence Force in theaters around the world.

Overall, this visit was a very useful opportunity to learn more about a thriving region of New Zealand, and to build even better linkages – in the commercial, community, civic, and security sectors.