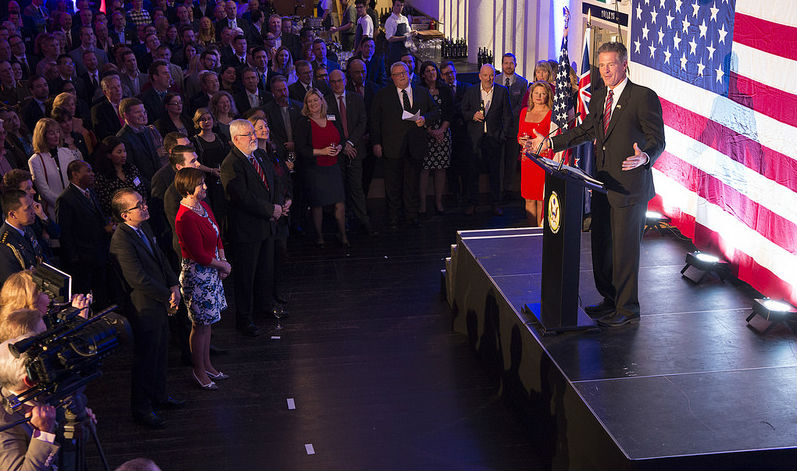 Ambassador Scott Brown’s inaugural 4th of July Independence Day in New Zealand with a packed reception at the Hunter Lounge at the Victoria University of Wellington.

Foreign Minister Gerry Brownlee, represented the New Zealand government and was joined by hundreds of others including Ministers, members of the New Zealand Parliament, military, cultural and media representatives and members of the diplomatic corps. Guests celebrated the ‘Hometown Picnic’ theme with rock and country music as well as traditional American treats of fried chicken, pizza, chocolate chip cookies, and American beer and wine.

The formal portion of the program began with a high-precision Color Guard ceremony by the United States Marine Corps, led by Detachment Commander SSgt. Geoffrey Halterman. They were followed by the Wellington Girls’ College’s Teal Voices, who gave stirring performances of the national anthems of the United States and New Zealand.

Mrs. Gail Brown took to the stage to introduce the Ambassador. She shared how much they were looking forward to their time here in New Zealand exploring the beauty of its land and its people. Ambassador Brown talked about his belief in the unique bond of NZ-US relations. He voiced his enthusiasm for the strength and breadth of the bilateral relationship and said he was looking forward to contributing to enhancing relations even further.

The ambassador drew from our shared history highlighting the cooperation between the United States and New Zealand which has led to unprecedented opportunities in growth in both our economies. The ambassador added that US-NZ partnership was crucial in securing stability and peace in the Pacific, and in our shared efforts in the global stage.

Foreign Minister Gerry Brownlee addressed the reception in his speech that underlined how Kiwis and their government viewed their country’s relationship with the United States with great importance. Brownlee’s speech draws from history when the country’s first international relationship was created with Washington and how this relationship continue to be central to New Zealand’s foreign affairs; politically, economically and socially. Brownlee’s speech was complemented by remarks of support from Ambassador Brown and the two finished off with a toast to our two countries.