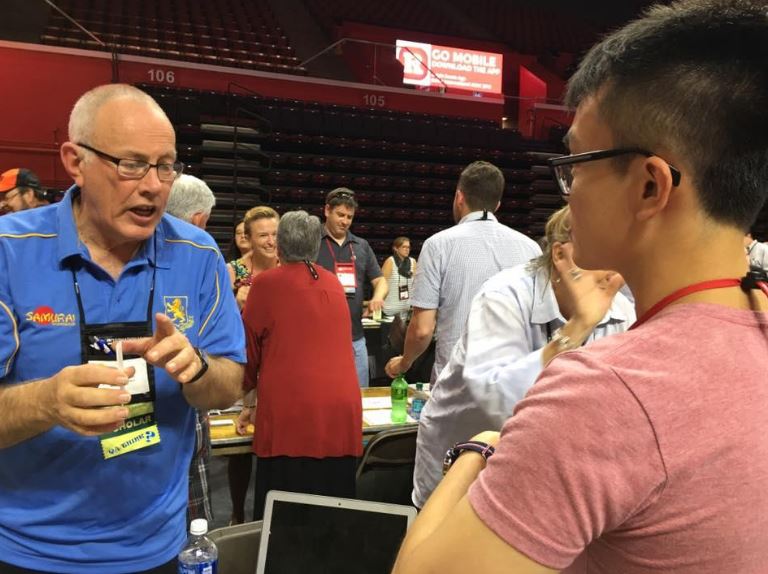 International ACAC (IACAC) was founded in 1991 and is affiliated with the US based National Association for College Admission Counseling (NACAC). IACAC brings together over 2,000 professionals from more than 90 countries worldwide.  The membership includes school counsellors and university liaison staff to work cooperatively to help students access postsecondary education internationally.  While the primary focus of IACAC is towards study opportunities in the U.S.A. there are also representatives from universities and colleges around the world.

IACAC has a strong commitment to the principle that opportunities in international education should not just be for the affluent.  They have established the Inclusion Access and Success Committee currently led by Joan Liu supported by an amazing team. The IAS Committee administers the International Scholarship Program.

I was nominated for the IACAC Scholars Program by Katie Sleeman, EducationUSA representative in New Zealand.  The Scholarship is aimed at giving school counsellors who would not otherwise be able to attend an IACAC conference the opportunity to do so.  The IAS Committee of IACAC is looking to support counsellors who will make a difference for underrepresented students who traditionally have not had access to the resources, information, and guidance needed to pursue international higher education.

I feel greatly honored to have been selected as an IACAC Scholar for 2016.  I am the first Scholar to have represented New Zealand at an IACAC Conference.  While New Zealand has a significant number of students who can afford to undertake study in the U.S.A. I see it as my responsibility to reach out to the many other students who may want to access international education but could not do so without support, advice and financial assistance.

The IACAC Scholars Program covered all the costs of attending the Pre-Conference Institute and the main IACAC Conference and, following on from the conference, a bus tour of Universities and Colleges.  The Program also includes a year of mentoring by an experienced college counsellor and three years of IACAC membership.

The IAS Committee of IACAC went to great lengths to ensure the Scholars were well-prepared for the conference.  We were mentored through the production of school profiles and given advice about how to prepare for the conference.  We also had the opportunity to participate in webinars. The result was that we were able to make the most of the opportunity.

I arrived in Newark, New Jersey after 27 hours of flights and stopovers.  I was greeted by Cheryl, a member of the IAS Committee which the Scholars soon renamed the “Hug Committee” as we received wrap around care throughout our stay.  The preparation we had been given also meant that we had got the chance to know each other through Skype and email and that first day saw the beginning of lifelong friendships. My new friends came from Brunei, El Salvador, Ghana, Latvia, Malawi, Macedonia, Nepal, and Zimbabwe.

We had a day with the IAS Committee to prepare us for what was to come.  It meant we were able to head into the Pre-Conference Institute ready to get the most out of the sessions.

While the Pre-Conference Institute had just a few hundred attendees the conference itself was attended by around 1200 delegates.  Most from the US but others from around the world.  I was really glad we had time to settle in and that I had a group of friends.  It was easy to meet new people and everybody was keen to meet up and share stories.

The sessions were really interesting and greatly increased my understanding of the enrolment processes for international universities.  I attended sessions about sports scholarships; access, affordability and financial aid; writing application letters; standardized testing; and UCAS.  There were also valuable plenary sessions dealing with issues in counselling including ethics.

The International Scholars also hosted a session on Trends, Challenges and Opportunities.  This was a great chance to present on issues we face to a number of liaison specialists from Universities offering aid to international students.

The fairs were also an incredible experience.  I was glad the University Fair came first because that gave me an idea of what to expect.  The Rutgers Gym was packed with stands and I raced around making as many contacts as I could.  Then it was our turn.  I was a bit nervous that maybe none of the liaison people would want to take the time to talk to someone from New Zealand but I was soon really busy making contacts, promoting my school and fielding questions about education in New Zealand.

As soon as the conference was over it was time for campus tours. There were only four of the scholars on my bus so it was an opportunity to make some more good contacts from around the world.  The times on the bus were great opportunities for conversation and discussion around the issues we faced. (To be continued…read part 2 here.)