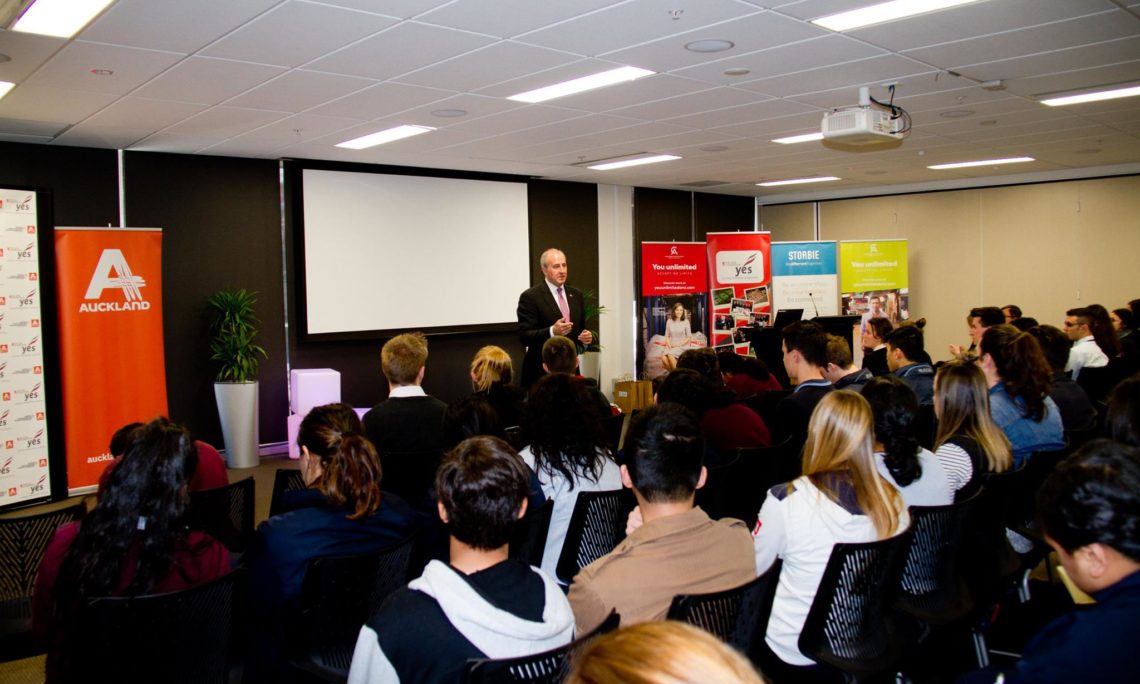 The month of August was action-packed with youth outreach in Auckland, which gave U.S. Consulate General staff members and kiwi youth the opportunity to engage on issues of significance to both the United States and New Zealand. Topics of discussion this month included the U.S. presidential elections and broader foreign policy, doing business in the U.S., and the power of sports.

On August 10, diplomat Conor Dickinson spoke on the U.S. elections to 13-16 year old students at Hobsonville Point Secondary School. This new school was formed in 2014. Conor’s speech was a chance for New Zealand student to learn about the complex U.S. Elections process and democracy. Conor responded to topical Elections questions such as: How will the new President affect New Zealand trade? Where do the presidential candidates stand on gun control issues? The students also had an opportunity to find out more about the life of a diplomat by asking questions such as “How did you get to where you are as a diplomat?” and “What’s the hardest part of your job?”

On August 18, diplomat Kennon Kincaid spoke to Year 10 students at ACG Parnell, who have been studying New Zealand’s role in World War I. Kennon spoke on America’s role in the war, covering President Woodrow Wilson’s fourteen points for peace negotiations and, more broadly, how the U.S. moved from isolationism to the world stage and. In recognition that history is ongoing and dynamic, Kennon discussed with students how America’s role in WWI has influenced today’s U.S. foreign policy, especially its role in the United Nations, its military and its trade. The students thought deeply and critically about both the roles of New Zealand and the U.S. in international affairs.

From August 18-19 during the U.S. Ambassador’s trip to Auckland he too had an opportunity to meet up with local Auckland youth. He spoke to Auckland Grammar School’s senior history students on the trending topic of the U.S. Elections. He had over 100 students opt in to attend this guest speech. The majority of time was filled with questions and answers. The Ambassador answered detailed questions such as: If Donald Trump is elected, how do you think his election will impact the global financial market? How could the Trans Pacific Partnership Agreement be ratified by Congress in the lame duck session? What is the impact of gerrymandering on U.S. Elections? The students thoroughly enjoyed the directness and candor with which the Ambassador answered their questions. One student remarked “Thank you for giving up your afternoon to come speak with us … most interest hour of school in a long time!”

The U.S. Ambassador (and former White Sox professional baseball player) then switched gears to do some sports diplomacy outreach with Baseball New Zealand youth and Alex Dunlap, a U.S. Consulate intern and Stanford University baseball player. The Ambassador and Alex were a power duo. They discussed with kiwi youth how baseball skills such as teamwork, practice, and hard work transfer into educational, professional, and diplomatic opportunities. The Ambassador also got to hit a few balls with the youngsters. For more on their baseball outreach check out the full blog at post: U.S. Ambassador Gilbert and Alex Dunlap Team up to Coach Kiwi Baseball Students and the story in the U.S. Ambassador and Former Pro Passes on His Experience to Kiwi Baseballers.

The Ambassador’s final youth engagement while in Auckland was the keynote address at the Young Enterprise Trust’s Communication Conference. The Young Enterprise Trust teaches high school students how to create, implement, and develop business products and services to address New Zealand community and international needs. The Conference brought together over 50 schools in Auckland. The Ambassador spoke on the importance of communication in business and how to get the most of your contacts and resources. These topics were grounded in the Ambassador’s personal experiences in business and diplomacy. The students took on the Ambassador’s tips as they embark on their business journeys as young innovators and entrepreneurs. One student remarked that he “loved every moment of the presentation” and that the Ambassador truly “made the day so successful”.