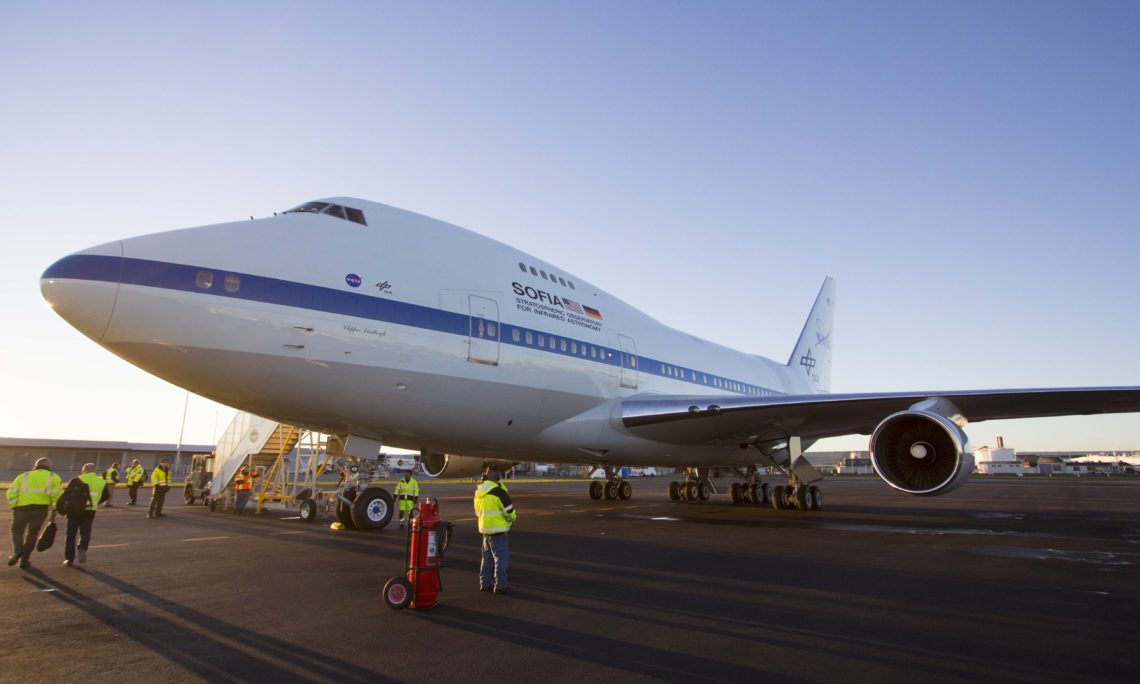 Seeing the Aurora Australis, traversing the Antarctic Circle, and peering into never before seen stars in the centre of our Milky Way galaxy might individually sound like unique achievements – but for the crew and astronomers of NASA’s SOFIA airborne observatory, it’s all in a night’s work.

SOFIA – or the Stratospheric Observatory for Infrared Astronomy – is the largest airborne observatory in the world.  During an 8-10 hour mission flight time, the one-of-a-kind converted 747SP Jetliner rises over the Southern Ocean to 45,000ft (nearly 14km), putting the 106-inch diameter 17-ton telescope above 95% of the atmosphere’s water vapour for ultra-clear views of celestial bodies (and any auroras that conveniently happen to be outside the windows of the plane).

Now in its fifth year in New Zealand, this winter season has seen SOFIA conduct deep-space and Solar System observations – including our neighboring galaxy the Large Magellanic Cloud, the centre of our own Milky Way galaxy, Saturn’s moon Titan, the Tarantula Nebula and the material ejected from (and swept up by) Supernova 1987A.

On this specific mission the crew – a mixture of U.S., German, Spanish and English astronomers, mission specialists, pilots and researchers – were focusing their efforts on the centre of the Milky Way Galaxy (and the supermassive black hole located there).  Scientists know that this area has strong magnetic fields that affect the material spiralling into the black hole, flowing away from past supernova explosions and forming new stars. But, they want to better understand the shape and strength of these magnetic fields, to gain new insights into how they impact the processes in the galactic centre.

As might be expected from astronomers working on a one-of-a-kind observation platform, the atmosphere was buzzing as SOFIA undertook sweeping flight legs across the Southern Ocean.  Made more exciting by our remote location and distance from… well everything really!

With research outputs estimated unscientifically at, “one research paper per hour of observation”, the data, insights and information gained on SOFIA is truly unique and ground-breaking. And the excitement from the assembled guests – including National’s Spokesperson for Science and Innovation Dr Parmjeet Parmar, and leaders from New Zealand’s Centre for Space Science Technology, Air New Zealand and JPL – showed the passion for scientific endeavours and NASA operations never fades.

A joint venture between NASA and the German Aerospace Centre (DLR), SOFIA resides in its ‘off season’ at NASA’s Armstrong Flight Research Centre in Palmdale, California, while the SOFIA Program Office itself is at NASA Ames Research Centre.

But while it is here in New Zealand, taking advantage of our clear night skies and unique global position, it demonstrates another piece of outstanding collaboration in science and research, and learning more together about our universe.

Sadly our mission, a chilly trip across one of the emptiest areas on the globe, had to come to an end eventually.  Thus, after many hours flying across the darkened skies and remote islands of the Southern Ocean, peering thousands of lightyears into the sky, we headed for home returning to Christchurch at 4.00am.