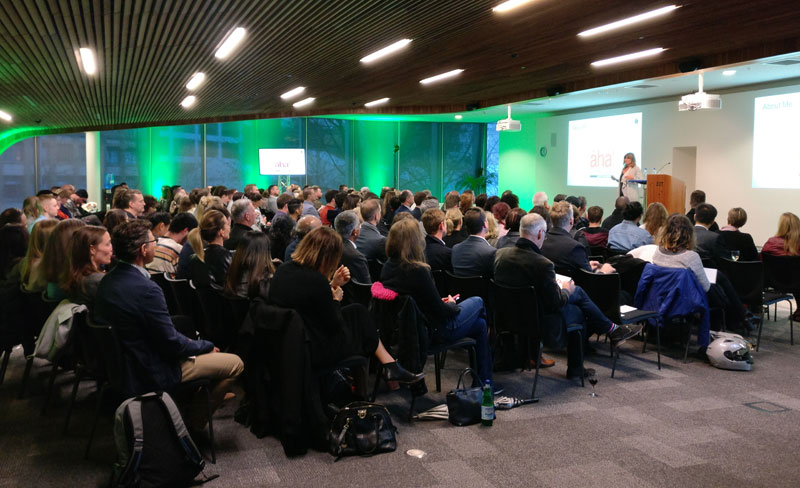 Andy Cunningham was in Auckland for the Project series, founded by the U.S. Embassy and the Auckland University of Technology. See below for further Project events coming up.

“Brand Strategy by Design” was the third event I attended as part of the U.S. Embassy Youth Council. Upon finding out that one of Silicon Valley’s brand strategy heavyweights, Andy Cunningham, was the keynote speaker, I was intrigued and eager to attend. I was keen to learn about what it took to create and maintain the brand image that major organisations like Apple and Pixar have today.

With these companies being industry leaders in the world, and with me being in my final year of study as a business student, I was thrilled to learn a whole lot more.

Andy Cunningham started off the night explaining the concept of market positioning and explained that every company, like people, has DNA.  Like the DNA in humans, a company has “positioning DNA”, which creates the company’s identity and indicates where the company should position themselves in the marketplace. Cunningham boiled the concept down to three main types of “positioning DNA” – 1. Customer-oriented companies: the “mothers”; 2. Product-oriented companies: the “mechanics”; and 3. Concept-oriented companies: the “missionaries”. I found the comparison of characteristics between an organisation and a human-being absolutely fascinating – with the description of both being in a state of ‘living’, with a will to survive and experiencing existential crises.

Andy Cunningham further explained that positioning is separate from branding. And with the event titled ‘Brand Strategy by Design’, I assumed that positioning would be a subset of branding and Cunningham would make branding the focal point of the night. To my surprise, Andy emphasised the importance of positioning, and the two subsequent questions all organisations should ask, in order to properly position themselves: “Who are we?” and “Why do we matter?”

Only when these questions have been answered does a company truly have a chance experiencing success in its branding strategies. An anecdote about Cunningham’s time working with Steve Jobs, when Apple was just releasing the very first Macintosh, really left an impression on me. She described this as an example of Apple incorrectly positioning itself.

At the time, the majority of businesses were using Microsoft computers and Apple positioned itself to be the replacement, encouraging businesses to start using the Macintosh. However, Apple would later discover Macintosh resonated with the more creative departments within businesses, and Apple repositioned themselves to market towards the ‘creators’ and ‘pioneers’ of the world. It was this realization – a company first answering the necessary questions before implementing branding – that resulted in Apple’s reputation and success today.

So, as well as gaining a deeper knowledge of the ‘people-company’ idea and finding out about the two key questions (that sounds like someone who is experiencing an existential crisis would ask), I also had the pleasure of sharing a few laughs with current and former Youth Councillors, and the team from AUT.  Ultimately, the evening turned out to be an extremely informative and equally a pleasurable time!

Project Save the date (November): The Future of Crowdfunding with Indiegogo’s Kate Drane.

Indiegogo’s Kate Drane will be sharing about the future of the crowd-funding as a path to market, successful case studies and a few secrets for running a million dollar campaign. As well as letting us in on some significant trends in the crowdfunding world.

Kate Drane is Indiegogo’s Senior Director of Outreach for Tech and Hardware. She loves democratizing access to resources and considers herself as a VC of the people. Since starting at Indiegogo in July 2012, she’s empowered more than 650 entrepreneurs to collectively raise over $90M on the Indiegogo platform, including Canary, Misfit, and XPRIZE.

In addition to working at Indiegogo, Kate is the co-founder and CMO of The Can Van, the world’s first mobile beer canning service made to bring reasonably priced and environmentally friendly packaging options to California breweries. She met her co-founders while attending Presidio Graduate School, where she received her MBA in Sustainable Management.

Kate frequently speaks at events around the world including Amazon Launchpad, CES and TEDx.