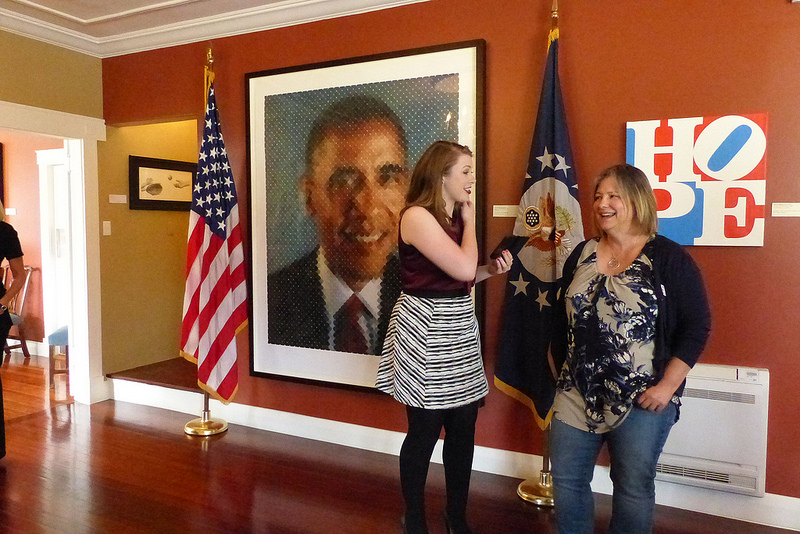 As burgeoning business leaders move into the world, bridging the gap between one generation and the next is of vital importance. The State Department was proud to fund and support the Tuākana Youth Mentoring Program run by NGO Leadership New Zealand and the Fulbright New Zealand Alumni Association. Tuākana means big brother/sister in Te Reo Maori – appropriate as the program paired twenty highly motivated students and young professionals with accomplished mentors over the past five months.

On November 14, around 30 participants of the Embassy sponsored program gathered at the Ambassador’s residence to take part in a ‘capstone’ workshop, to review the program, discuss lessons learned, and look at future opportunities to engage as alumni.  Ambassador and Mrs. Gilbert spent the entire day in group and one-on-one sessions with both young mentees and their Leadership New Zealand mentors.  Among the many highlights of the day was an inspiring talk to the group from Embassy contact, Young New Zealander of the Year, Guy Ryan.

One mentee, Rachael Harris, a Judge’s Clark working at the Christchurch District Court, has shared her thoughts on the program…

The first thing you see when you enter the Ambassador’s Residence in Lower Hutt, is a massive Chuck Close portrait of President Obama. The striking image is flanked with an American Flag and a smaller, but just as arresting, painting; simply of the word ‘Hope’. This set the scene brilliantly for the Tuākana Youth Mentoring program wrap-up day.

I was matched with Claire McQuilken, the Operations Manager of Pegasus Healthcare in Christchurch. Claire has vast experience in a range of different management roles, including at the Accident Compensation Corporation.  Claire and I strove to meet every 3-4 weeks to discuss broader leadership and precise issues that I was facing in both my professional and personal lives. It was hugely beneficial to work with someone who was from a totally different area to me.

One of the many benefits that I gained from working with Claire was the ability to isolate a variety of leadership techniques and styles. I had fallen into the trap of believing that leaders were defined by their roles – also known as positional leadership. Claire helped me to explore other concepts such as societal leadership, and how my behavior in a societal context could help me to become a better leader.

I took great value from working with a mentor who was someone I was not affiliated to professionally. It’s a real privilege to be able to tap the wisdom of a woman who has ‘been there, done that’, and we had many interesting conversations about being a woman in a professional environment, and how to stand strong and be counted.

I really enjoyed the final ‘wrap up’ day in Wellington. It was an occasion filled with passion, excitement, and intellectual discussion about the way that we, as young leaders, can make a difference in the future. Meeting other Tuākana leaders and hearing their experiences has also broadened my horizons. I am grateful to Judy and Sina at Leadership NZ for facilitating the workshops and challenging us to lead fearlessly. I am also thankful to Ambassador and Nancy Gilbert for throwing open the doors of their lovely home, inviting us to enjoy their incredible art collection (as well as the Chuck Close Obama, there were other notable works including a Warhol Uncle Sam) and themselves participating in the workshops.

The biggest takeaway of all that I got from the Tuākana program was the courage to stand up and put myself forward as a leader, when in the past I had shrugged away from the term. A gift of courage is a marvelous thing, and I thank the U.S. Embassy for the opportunity to participate in the Tuākana program.

Another of the highly accomplished participants, Jonathan Gee, currently studying in Wellington, also provided reflection on his experience…

As a young leader, it isn’t often that I’ve had the opportunity to reflect on my leadership journey and development with someone who has had ‘real world’ experience. In the midst of balancing university, a part-time job, and volunteer work, we often forget to stop and reflect on our experiences and draw lessons from them. That’s why the Tuākana Youth Leadership Mentoring Programme has been an invaluable opportunity for me. The programme has been a chance for me to engage in that critical self-reflection with a mentor who has been successful in their own leadership journey.

The last few months in the programme has involved two Embassy-organized workshops that were facilitated by Leadership New Zealand, along with individual regular sessions with our mentors. The workshops were a chance to better understand our skillsets as well as connect with other ‘mentees’, while the mentoring sessions provided for more individual reflection with a mentor who was specifically chosen for us by Leadership NZ.

For me, having a mentor this year has been particularly timely as I’ve reached a critical juncture in my leadership journey. In October, I was elected President of the Victoria University of Wellington Students’ Association (VUWSA). Starting in 2016, my role will challenge me to use a range of different leadership approaches. Taking the time to sit down with my mentor and think holistically about leadership has been incredibly satisfying in the way of both my personal and professional development. After every mentoring session, I’ve left realising that all the answers to my leadership questions were right in front of me – it just took a mentor to guide me through my experiences and draw them out.

More photos from this event can be found on FlickR.