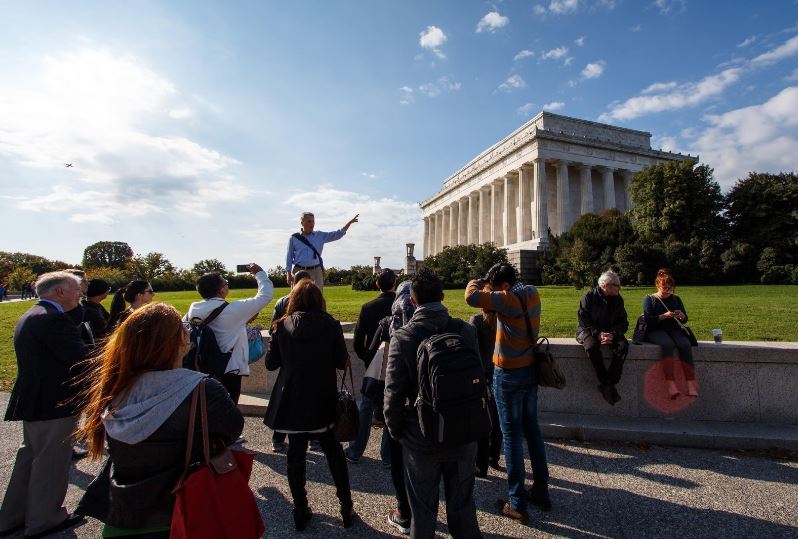 In October 2016 Emma took part in the inaugural Global Digital Leaders Exchange, a program instigated by Megan Smith (the 3rd Chief Technology Officer of the United States under President Obama) and the U.S. Digital Service, and run by the State Department’s International Visitors Leadership Program (IVLP).

Building digital government in the U.S.

The Global Digital Leaders Exchange brings together existing and emerging leaders in digital government to share best practices, scale their work across countries, and strengthen the network globally.

If you’re not familiar with digital government, we commonly talk about using design and technology to deliver better services for citizens, and it is as much about changing culture and ways of working as it is about the technology which sits behind it.

We heard about the U.S. experience of building digital government at federal, state and city level.

We learned about the private sector ecosystem that supports innovation and entrepreneurship, including Silicon Valley Bank on how they support technology companies, incubators including 1776 which help high-growth start-ups, and venture capital company Andreessen Horowitz which invest in emerging firms.

We also met with co-working communities like the OpenGov Hub and SUPERPUBLIC who support a network of organisations promoting civic engagement.

It was an invigorating and inspiring program that broadened our understanding of the digital government ecosystem in the U.S. and how it interacts globally.

Megan Smith, the sponsor of the program and then Chief Technology Officer of the United States, spoke passionately in her opening address to the group about activating the talent of 7 billion global citizens, and how we can and should work together across nations to solve the hardest problems of our societies.

Hearing from within the group about their work was a second highlight of the program.  Coming from government, the private sector and civil society, we all brought different perspectives, passion and expertise on how we can contribute to better government.

That included hearing from the group about using transparency to improve democracy in Tunisia following the Arab Spring; Kenya’s M-PESA platform, a mobile money service which has transformed Kenya’s economy; Estonia’s pioneering E-Residency platform; work to ensure the privacy of citizens in the Philippines when dealing with government data; and developing digital means to improve Mexico’s readiness and resilience in the event of a natural disaster (a topic front of mind in New Zealand after the recent Kaikoura earthquake).

Digital transformation is a great leveler when it comes to governments.  Many of the features that make more established and stable democracies like the U.S. or New Zealand successful, are also things which get in the way of being innovative, spurring change and taking risks.  It’s my new friends and colleagues from the wider group who may hold the answers or come up with different ideas that influence how we do things in the future.

As consumers of American TV and films, we’re often presented with glossy version of city life in America. So I was really interested to see how the Midwest city Columbus compared.  To get a sense of scale: Ohio has a population of 11.6 million (that’s more than double the population of New Zealand), and Columbus itself is the fifteenth largest city in the country, just behind San Francisco.  It’s also a swing state, so it was interesting to experience the mood just a couple of weeks pre-election when campaigns were in full swing.

It was also an opportunity to see an American city I would never have chosen to travel to as a tourist.  Highlights included visiting the beautiful German Village, strolling the Scioto Mile, opened in 2015 after an environmental rehabilitation project, and relaxing at the North Market, a popular food spot with over 30 vendors selling fresh local food.  Yum.

What did it mean to me?

The exchange was a fantastic opportunity to step back and consider our work in New Zealand in a global context.  What we’re good at, and where we could take more inspiration from others.  I particularly enjoyed the opportunity to understand the private and civic sector ecosystems better.  Improving government is a team sport, so having this healthy, competitive and open network makes things better for everyone.

Throughout the exchange, everyone was extremely generous with their time and experience.  A particular highlight was hearing from the U.S. Digital Service, 18F and the Presidential Innovation Fellows, as their passion for the mission was so clear to see.

On a more personal note, the enthusiasm and welcome given by the international liaison officers who accompanied us on our visit was a hugely positive influence on the program.  I was deeply saddened to learn that one of our liaisons, Ashley Hardaway Theriot, passed away in January this year unexpectedly, at only 32.

Ashley embodied what the International Visitors Leadership Program is all about: an active advocate for citizen diplomacy, and a wonderfully welcoming and warm person with real pride in helping others see the best of her country.

About the IVLP Program – The International Visitor Leadership Program (IVLP) is the U.S. Department of State’s premier professional exchange program. Through short-term visits to the United States, current and emerging foreign leaders in a variety of fields experience this country firsthand and cultivate lasting relationships with their American counterparts. Professional meetings reflect the participants’ professional interests and support the foreign policy goals of the United States. Find out more at eca.state.gov/ivlp.