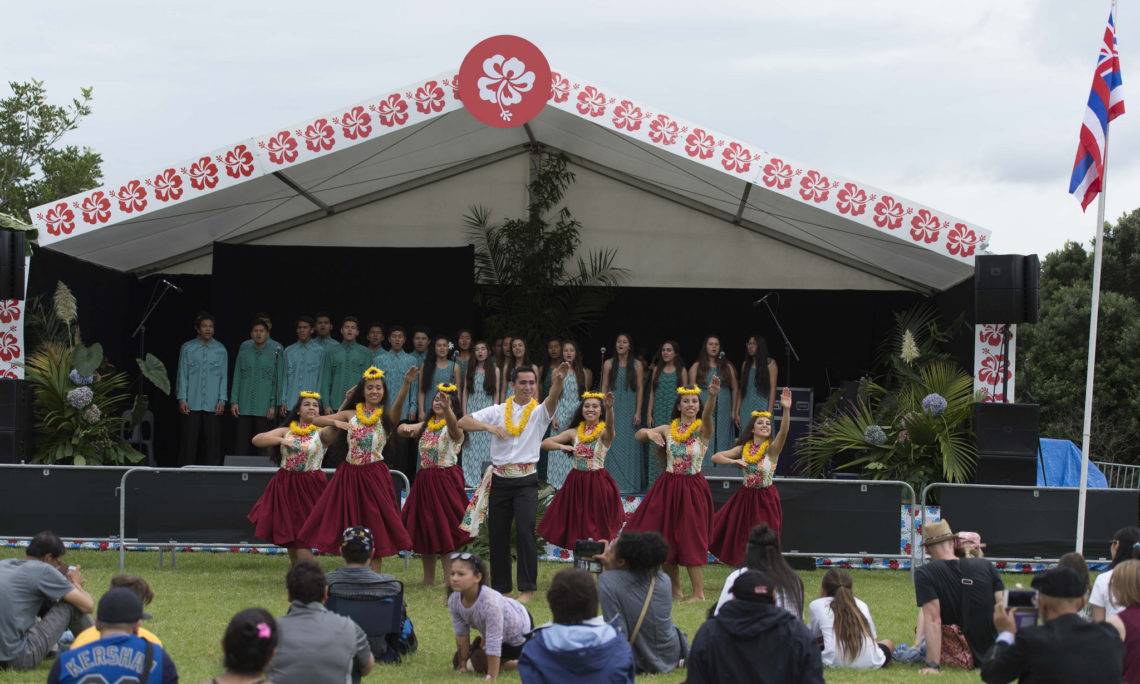 Each March a celebration of the rich history between Hawaii and Aotearoa descends onto the Hawaii Village at the Pasifika Festival in Auckland. Since launching the Hawaii Village in 2014, we continue to support the Hawaii Village Committee members who work tirelessly on a striking two day display of Hawaii arts, culture and food. This year, we worked with new additions to the Hawaii Village ohana, Island Breeze Productions, and muralist, Estria Miyashiro, in the lead up to the festival through a series of workshops and public performances.

At the Pasifika Festival over 100 Hawaiians from Hawaii and Aotearoa showcased the best of Hawaii from lomilomi (massage), makahiki games (ancient Hawaiian games), and dance, mesmerizing audiences. Back stage a frantic scene of colors, flowers, fabrics, instruments and bodies made a seamless transition commanding the stage with contemporary and traditional visual stories by Halau Hula (hula schools). Food vendors offered festival goers a taste of Hawaii favorites such as poke and kalua pig.

Heritage New Zealand and The Moko Foundation presented a high action free public performance at Te Waimate Mission. The country’s first road led visitors towards New Zealand’s second oldest building at this beautifully preserved historic property. Leina’ala Fruean the Island Breeze Music Director narrated the evening giving depth to the songs and movements. Locals tried their hand at hula as the cast took them step by step through the basics.

During his time in Samoa, Estria muraled the outer wall of the Nelson Memorial Library facing the town clock in the heart of Apia, with Myths and Legends of Samoa. Participating in the project were the children from American Corner’s reading program ‘Turn a Life Around’ led by of volunteers who focus on improving literacy of underprivileged youth. In addition to the mural was the screening of the documentary Mele Murals at the National University of Samoa.  The documentary is on the transformative power of modern graffiti art and ancient Hawaiian culture for a new generation of Native Hawaiians.  Working together to help facilitate and bring the project to fruition was the Ministry of Education Sports and Culture and their capable team at the Library, The National University of Samoa’s Centre for Samoan Studies and the Estria Foundation.

In New Zealand he teamed with Unitec art students to co-create and spray paint murals that symbolize the special relationship between Hawaii, Aotearoa, and the Pacific. Estria mentored the youth through a meditation process that later led to the merging of concepts, instincts and craft to create a mural titled ‘Arepa Omeka’ – featuring va’a (canoes), stars, sunrise, and landscapes paying homage to the ancient Polynesian voyagers that navigated the Pacific Ocean like a highway in search of new land. The mural will be a permanent fixture on display each year at the Hawaii Village.