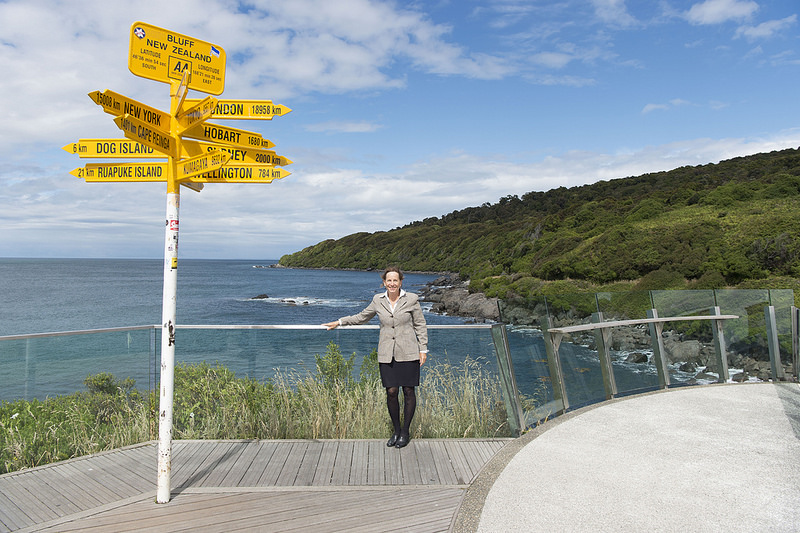 In the evening of Thursday 9 February 2017, Chargé d’Affaires Candy Green flew to Invercargill on a trip that would take her to the southernmost city of New Zealand and its environs to engage with the people – and fauna – of Southland.

A major highlight of the trip to Southland was the 2017 World Shearing and Woolhandling Championships, held at the ILT Stadium Southland in Invercargill.  Ms. Green attended in order to learn more about a tradition that thrives in both New Zealand and the United States, and to show her support for the event and for the American team.  Five Americans competed in different events:  team manager Loren Opstedahl of Piedmont, South Dakota; Leann Brimmer of Biddle, Montana; Alex Moser of Lester, Iowa; Kevin Ford of Charlemont, Massachusetts, and Maggie Passino of Scottsville, Virginia. Other teams came from near and far, including Mongolia, Switzerland, South Africa, Japan, Australia, the Cook Islands, the UK, and New Zealand.  The American team participated in all three aspects of the competition: wool handling, blade shearing and machine shearing.  Ms. Green was amazed and impressed by both the skills – and the fitness – of the competitors from around the world.

These discussions were wide-ranging and covered such matters as the current economic conditions in New Zealand and how Invercargill has been affected by housing market trends, Southland’s economic and environmental prospects in relation to industrial operations in the mining and fishing industries, prospective population growth and maximizing the returns of New Zealand’s growing film industry for the region. Education and the city’s Zero Fees Scheme and its positive economic effects on Invercargill and the greater Southland region were also discussed.

A vital component of the region’s economy, the New Zealand Aluminium Smelter (NZAS), was also on Ms. Green’s itinerary. This part of the trip took her to Tiwai Point, where she met with Chief Executive and General Manager Gretta Stephens and toured the facility. The Tiwai Smelter near Bluff is New Zealand’s only aluminum smelter and requires nearly 1/6 of New Zealand’s electrical generation capacity.

Ms. Green later headed to the Southland Museum in Invercargill to hear about the museum’s extensive tuatara conservation program (headlined by the famed supercentenarian and sphenodon, Henry) and to see exhibits on Southland history and culture. She was hosted by the museum manager Paul Horner and Hayley Browne, Head of Museum Operations.  Ms. Green reviewed the Tour of Tamatea: Art and Conservation in Dusky Sound exhibition with Visual Arts Curator, Ari Edgecombe, and the Tuatarium with the museum’s History Curator David Dudfield.