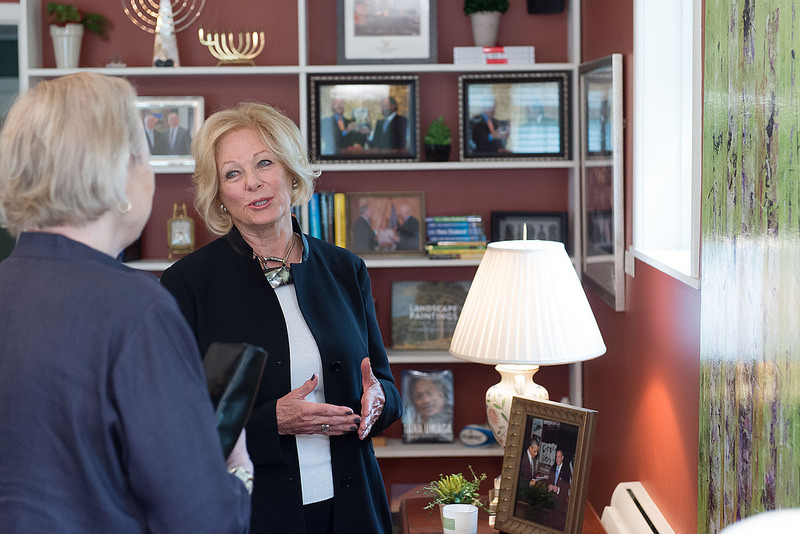 Beautiful things can bring people together like little else. Sometimes art, music and cultural exchange can be just as important to diplomacy as trade deals and defense treaties. This has been recognized since President John F. Kennedy first formalized the Art in Embassies program in 1963 to promote public diplomacy through cross-cultural dialogue and dynamic artist exchange.

Susan Swartz, a well-known painter from Utah, is one such talented artist involved with the program. On November 9th, Nancy Gilbert hosted a brunch to honor Ms Swartz and one of her pieces, ‘Forest Glow’, which is currently hanging in the Ambassador’s residence as part of Embassy Wellington’s Art in Embassies exhibition, Iconic Images.

The surrealistic painting depicts aspen trees in muted green and vivid purple, inspired by the forests of the Wasatch Mountains in the state of Utah. Ambassador and Mrs. Gilbert live part of the year in Utah and chose the piece because it reminds them of the forests near their home. The painting also provides a connection between American abstract landscape art and the lush new Zealand scenery they have enjoyed exploring since arriving in New Zealand.

Guests at the brunch included the directors of public galleries and museums in the greater Wellington region and three of the five New Zealand artists whose work also features in the exhibition – Nikki McIvor, Paul McLachlan and Anne Noble.

It was the first time the Embassy has been able to host multiple contributing artists since the exhibition opened in June and a great opportunity for the Kiwi artists to meet one of the American painters whose work theirs hangs with in the Residence.  Mrs. Gilbert talked to the guests about the Art in Embassies program and the genesis and evolution of this exhibition, which includes images of American and New Zealand icons including cowboy boots, baseball, a banana split, Uncle Sam, the Statue of Liberty, a buffalo and President Obama; a kiwi bird, a hei tiki, WWI soldiers, and penguins.

Ms. Swartz spoke about her career as an artist, her subjects and style. Each of the New Zealand artists also spoke and Mrs. Gilbert led an art conversation with all of those gathered.

Find out more about Susan Swartz at susanswartz.com.

Find out more about the Art in Embassies program at art.state.gov.