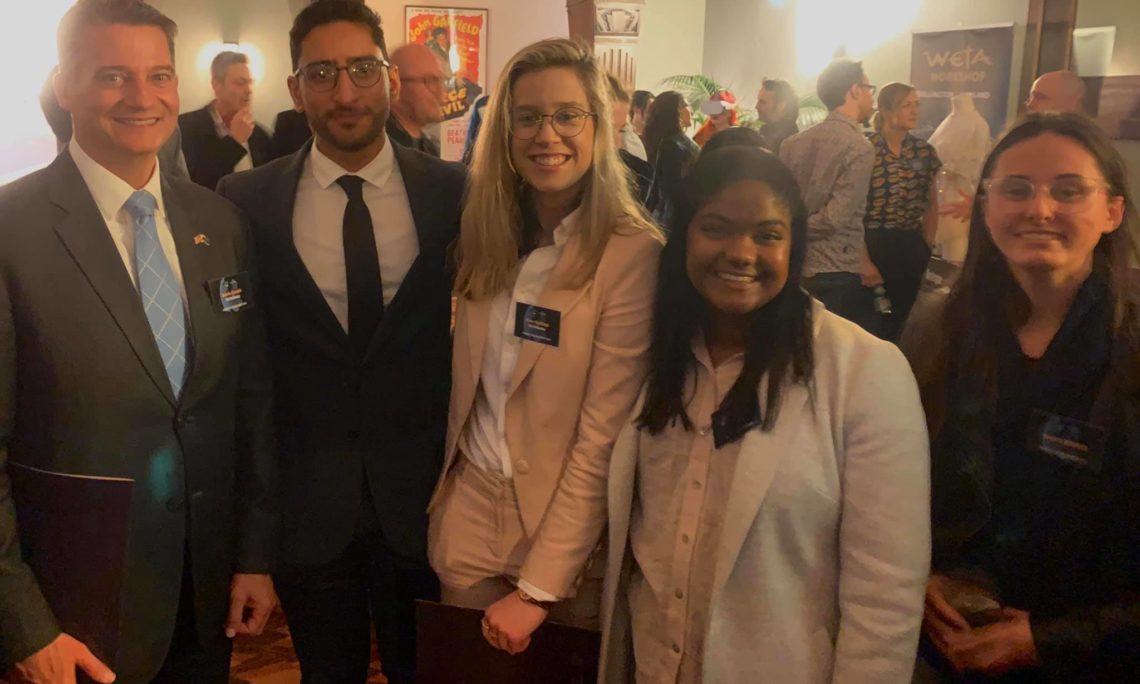 Deputy Chief of Mission, Kevin Covert, attended the Creative Futures industry meet-and-greet at The Roxy Cinema, and experienced some of the ground-breaking digital interactions on display – including Dr. Grordbort’s Invaders, & works by speakers from Disney & Weta Digital. The Embassy was proud to support Miramar Creative’s Creative Futures conference – the two-day event offered insights into new technologies and demonstrated their application to creativity, business and our future daily lives.

First of all, I was honoured and flattered to be hosted by the US Embassy to have been selected to attend the Creative Futures conference sponsored by the embassy. I want to thank Ron in particular for making that happen.

I applied to go to this conference because I have very little knowledge in the area of VR and mixed reality technology, and I wanted to learn more about the new limits of this type of media and the awesome entrepreneurial ideas that people have created. Technology is the future. I was not disappointed. Professors, creators, business people, political junkies- the list could go on- have created innovative ideas to push social issues, psychological issues and business ideas in a way that not only is attention-grabbing; but genius.

After arriving at the meet and greet on the Thursday evening, I immediately rushed into taking the opportunity of putting on a VR headset that was telling Maori legends and explaining the Maori perspective on the landscape of Aotearoa. This brilliant idea was designed to try and bring Tikanga more prevalently into the education system. This was followed by a conversation with Professor from New York who was using VR and Mixed Reality to remove the fallacies about climate change and what it was doing to the world’s ecosystem. This project was about bringing immersive information to people without them having to go out in search of it. In an essence, I found it very interesting that tertiary educators felt that education was also taking a turn. People in countries like NZ and the US now expect information to brought to their fingertips; rather than people exposing information for themselves. This new perspective resonated with me significantly, as I am still completing my degree, and I have been contemplating what this means for the future of tertiary education. How will education develop? How will research papers develop? Will VR be a requirement for education; rather than a privilege? These questions are ones that I do not yet have an answer to- but I fear the mission of trolling the library in search of one particular book that you can only have for two hours and extricating the most important facts from may soon be gone.

I also personally enjoyed the speech given by MFAT chief Chris Seed. His speech related to the trade part of VR technology and New Zealand’s potential within it. As with most entrepreneurial ideas; the key to making sure that creative ideas and technological developments continue, is to educate and inspire. I found it very inspiring that both the US Embassy and New Zealand (MFAT speaking on behalf) were committed to ensuring creativity continues to flourish and inspire. I truly believe that this commitment is being adhered to in good faith by looking at some of the great technological ideas that were being presented.

Whether it is at Disney world in the US or at the tower of London in the UK; media and how we use it continues to astound me. But what makes all of these new, innovative ideas come to fruition and “off the ground” is the work media does to make sure these people and ideas are found. There have been arguments that, “the market place of ideas” (jargon- apologies) is over fluctuated and thus it is hard to find the best ideas; rather than just the loudest. These ideas arguably are
some of the best, and they have been found- some brought from the other side of the world to speak about their ideas. Creative Futures is a prime example of great minds combining together to show the future of technology is going to be bright.

New Zealand as a country was presented as a landmark for innovation and I’m super excited to see what the future brings. Weta Workshop and Magic Leap are a great place to start. New Zealand companies have been at the forefront of innovation and I’m excited to see more of what we have to offer because we have so much to offer as a nation and an innovative hub of development. I likened the ideas and discussions in this realm to that of space innovation, New
Zealand can be a centre for innovative development and I’m excited to see the future of it- and hopefully finally understand a thing or two about VR.

Creative Futures was a two-day dedication to the role of technology in shaping the future of the creative industry. Hosted in the beautiful Miramar Creative centre of the Roxy Cinema, the conference started with exhibitions from the various projects that were on display. I had the fortune of experiencing a product that was a testament to the intersection of our proud Maori heritage and the world of virtual reality (VR). As soon as I put the headset on I was sent to a
beach somewhere in the south island and a voice starting speaking into my ear. She was telling the story of Kupe. The creators came up with this novel idea when they noticed they were telling the same myths and legends to their kids every night before bed. In using VR, not only could they connect with these kids at a deeper level but any school, parent, or Marae could use this repository of legends they had recreated to teach the masses.

The speaker sessions kicked off with presentations from many big names including Weta Workshop, Walt Disney, Magic Leap and Victoria University of Wellington amongst many others. During the talks a theme started to emerge. Many of the initiatives that were presented came from humble beginnings here in New Zealand but had spread to the US and around the globe with the help of the US embassy and the relationships formed through the Ministry of Foreign Affairs. The well known Weta Workshop was an example of this. Started in 1987, its influence has been seen by the entire globe having produced high profile films such was the Lord of the Rings trilogy, King Kong and more recently, special effects in the films: I Am Mother, Alita: Battle Angel and The Wandering Earth.

Another initiative known as Magic Leap was an example of collaboration from overseas creative vendors coming to New Zealand to make use of our rich talent pool. The technology of Magic Leap was clearly one-of-a-kind. They were using a headset to project images on the retina of the viewer such that not only could the viewer see virtually generated characters in their visual field but they could also see the environment around them. In this way they had created the first ‘spatial mixed reality’ technology in the world. Having first established seven years ago, they had just released their first product to the market last year, and with it came a game which was created by a lab here in our very own Wellington. When you put on the headset the game, it was clear the game that was produced was a way to showcase the true power of the technology. The controller turned into a toy gun, and funny-looking robots appeared in the room you were in. The aim of the game was simple- to shoot the robots that were coming from every direction — everywhere from holes in the wall, to hallways and behind couches. Although the game was made for the fun of the viewer, the true impact of the technology was for industries such as construction, healthcare and education. For healthcare, for example, Magic Leap could be used to augment the visual field of a surgeon during surgery. While operating on the patient it could possible to show a render of where the arteries and veins such as to avoid such areas. In construction, the workers would be shown which parts of a building could be at most risk of tensile strength by generated the forces on that joint through a pre-built physics model. The possibilities were endless.

I expected to be surprised before attending the conference. But during the two days I left more than just surprised, I was astonished with the rate of progress in technology and its influence in the creative sector. Not only were these technologies pushing the creative process but they were entering the lives with never before seen ways. They were creating immerse environments to tell stories, to augment professional disciplines and enhancing our entertainment in a truly innovative way.

Views of guest bloggers may or maynot represent the views of the U.S. government. The links contained herein are for informational purposes only and do not necessarily reflect the views or endorsement of the U.S. Government or the U.S. Department of State.