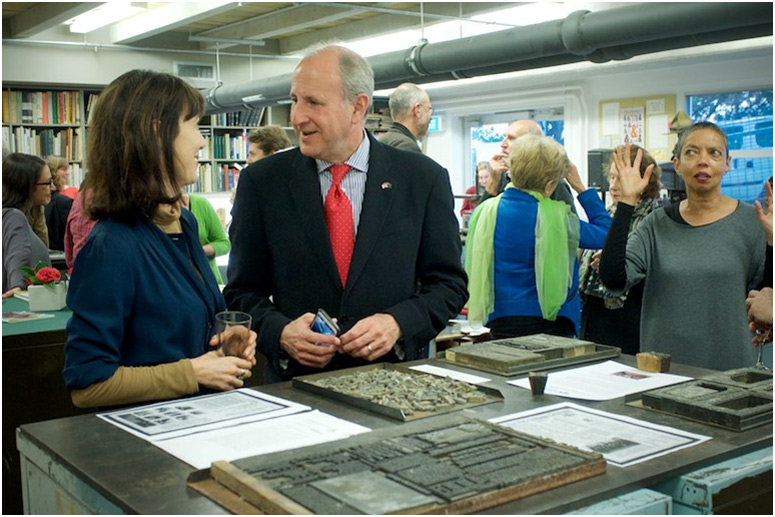 September was a very cultural month for Embassy Wellington with a number of interesting visitors coming to town. We’ve had stimulating conversations and a peek into the world of New York publishing with Jonathan Galassi; soaring voices and more than a touch of glamor with Renée Fleming; and a sprinkling of everything from glitter to mosaics to aliens to sheet metal stars with a group of inspiring American WOW designers.

In early September, the Embassy was pleased to support the visit to New Zealand by American publisher, poet, interpreter and author Jonathan Galassi.  Mr. Galassi is the President and Publisher of New York publishing house Farrar, Straus & Giroux, and the author of three collections of poetry, acclaimed translations of the Italian poets Eugenio Montale and Giacomo Leopardi, and just recently his first novel, Muse (2015). A former Guggenheim Fellow and poetry editor of The Paris Review, Mr. Galassi also writes for The New York Review of Books, The New Republic, and other publications.

Mr. Galassi was hosted in Wellington by Victoria University (The New Zealand Centre for Literary Translation, the School of Languages and Cultures, and Wai-te-ata Press) and the visit was also supported by the Embassy of Italy. Mr. Galassi gave two talks at Victoria University and participated in a public discussion and book signing at local bookstore, Unity Books.

The Embassy sponsored a reception for Mr. Galassi on September 8th, held at Wai-te-ata Press on the university grounds. The event, entitled ‘Translating the Muse: A Creative Conversation with Jonathan Galassi’ was attended by around 50 members of the local literary and academic communities. Well-known New Zealand author and television presenter Emily Perkins facilitated the discussion with Mr. Galassi about his own background and career, and about Muse, from which he read several excerpts. The novel takes a satirical look at the publishing industry that he knows very well. At the conclusion of the talk Mr. Galassi answered questions from the audience about writing, editing and publishing. Ambassador Gilbert concluded the formalities by offering a toast, and joined guests for refreshments.

Ambassador and Mrs. Gilbert were thrilled to host world famous American soprano Renée Fleming for a dinner in her honor on September 10th. Ms. Fleming, sometimes known as “the people’s diva” was visiting New Zealand for the first time to sing with the New Zealand Symphony Orchestra in a one-off gala concert, conducted by James Judd.

Ms. Fleming is one of the greatest voices of our time with a reputation for an exceptional stage presence. She has sung in opera houses all over the world, including in Europe, Asia and South America, as well as the United States and now New Zealand! Ms. Fleming won a Grammy Award in 2013 for Best Classical Vocal Solo and last year was the first classical artist to sing the National Anthem at the Super Bowl. In 2013 President Obama presented her with the National Medal of Arts, at the White House, America’s highest cultural honor.

In his welcome at the dinner, attended by 55 friends of the Embassy and the New Zealand Symphony Orchestra, Ambassador Gilbert spoke about what an honor it was to have one of America’s best cultural ambassadors here in Wellington. He recalled hearing her sing at the Boca Raton Festival of the Arts in his home state of Florida in 2010 and expressed his excitement at attending her concert in Wellington.

Ms. Fleming also spoke to the guests, explaining that coming to New Zealand has been a long-time dream, especially after she had worked on one of the Lord of the Rings movie soundtracks with Sir Peter Jackson and voiced an opera singing character in The Adventures of Tintin.

Each year Wellington plays host to the now world-famous World of Wearable Arts– or WOW. The competition runs for two weeks in the capital with designers coming from around the globe to enter their designs in categories including costume and film, children’s uniforms, Aotearoa, architecture, circus and avant garde. The designs are showcased in an extravagant production that includes live performances, music and lighting.

This year there were six American finalists in the competition and Mrs. Nancy Gilbert was pleased to host the four teams who made it to New Zealand, for brunch. Sean Purucker and David Candelaria, Lynn Christiansen, Lorene Ireland, and Julian Hartzog joined Mrs. Gilbert and a group of Kiwi fashion design students from Massey University’s College of Creative Arts.

The American designers each spoke about their work and particularly their 2015 WOW entries, and some of the students also talked to the group about their end of year collections. The students enjoyed talking with the designers – getting tips and hearing about what brought them to wearable arts, and what inspires their designs.

After brunch the guests got together to create some wearable accessories that Mrs. Gilbert might wear to the WOW awards – all coming up with some great pieces that reflected a range of themes from whales to roses to the very avant garde…and of course using high quality materials including tin foil, crepe paper and sellotape!

Congratulations to all of the finalists, and special kudos to Sean Purucker and David Candelaria whose ‘Primary Sunset’ was a winner in the Weta Costume and Film Section.