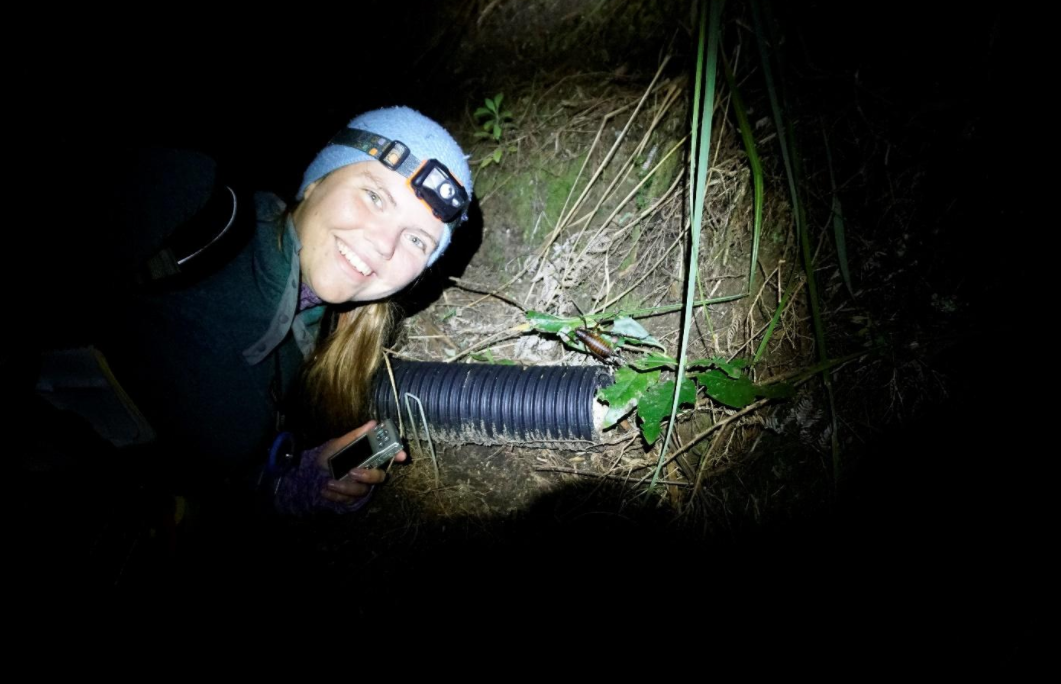 It’s 6:30pm, marking the start of a new night’s work. Weta are nocturnal; to study them, you have to align your schedule to theirs. Weta begin to emerge as soon as the sun starts to set, so we strap on our head torches and get ready to head into the Waikato’s Warrenheip Reserve. Slowly making our way through the trail set by many EcoQuesters before us, counting weta upon weta, we embark on the project we have been preparing for the last three months.

From the moment our feet hit the New Zealand soil (with clean boots, of course!), we were off running. A group of strangers, thousands of miles from home, thrown into a learning environment that opened us to an ecosystem unlike anything we had ever seen. With tree ferns towering above us, fantails following us through the woods, and eager hopes of catching sight of the elusive kiwi bird. Three months of traveling through a country that soon felt like a second home.

We were so engaged in learning that it didn’t even feel like work at all; these adventures taught me more than any classroom ever had. From studying the importance of marine reserves and snorkeling at the Poor Knights to climbing through Arthurs Pass to learn about alpine ecology; from writing scientific papers on the cockle populations surveyed in Opoutere, to critically evaluating our very place in the world’s ecosystems. The classes and interactive experiences prepared us for our return to the United States and completing our Directed Research Projects (DRPs), but most importantly it helped us prepare for our future studies and our future careers.

Before coming to New Zealand, I had never even heard of the weta before. Upon seeing a stack of more than eighty scientific papers outlining every detail of the weta the three of us would attempt to filter through in the coming weeks, I was immediately overwhelmed with the amount of work. I don’t think I have ever focused so much time and effort into one project before, it was unlike anything I had ever undertaken.

The pile of papers slowly but surely shrank as my colleagues and I worked our way through the pages, sharing our notes and knowledge with each other along the way. As I became further engaged with the project, the papers became less intimidating and grew in interest. After spending a week going out every night to collect data, discovering hundreds of weta between 6:30pm and 1:00am, I became more and more invested.

Between the frustrating afternoons sitting in our study room, confused by Excel and questioning how to organize 2,000 rows in a spreadsheet, and piles of tags we used to mark the weta still waiting to be dealt with; it all finally came together a week later.

Draft after draft, edit after edit, we started to piece together coherent papers and saw a light at the end of the tunnel. Five weeks of reading and writing, walking up and down Erin’s Weta Walk, learning more about weta than I believed possible about any insect. It was an experience unlike any other. The once seemingly never-ending list of tasks dwindled down to a final due date. Through days and nights that felt endless, engrossed in data entry or papers concerning weta abundances; I have never felt more proud or ready to take on a task, and I can only thank EcoQuest for getting me there.

The EcoQuest Education Foundation Te Rarangahau Taiao has a long-standing partnership with the Department of Natural Resources and the Environment (NREN) at the University of New Hampshire (UNH). EcoQuest was established in Aotearoa New Zealand in 1999, and operates a Field Centre for applied studies in ecology, resource management and environmental policy. The uniquely interactive field studies programs (semester and summer) have been offered in partnership with UNH since 1999. Programs are accredited by UNH and are open to highly motivated students from around the world.