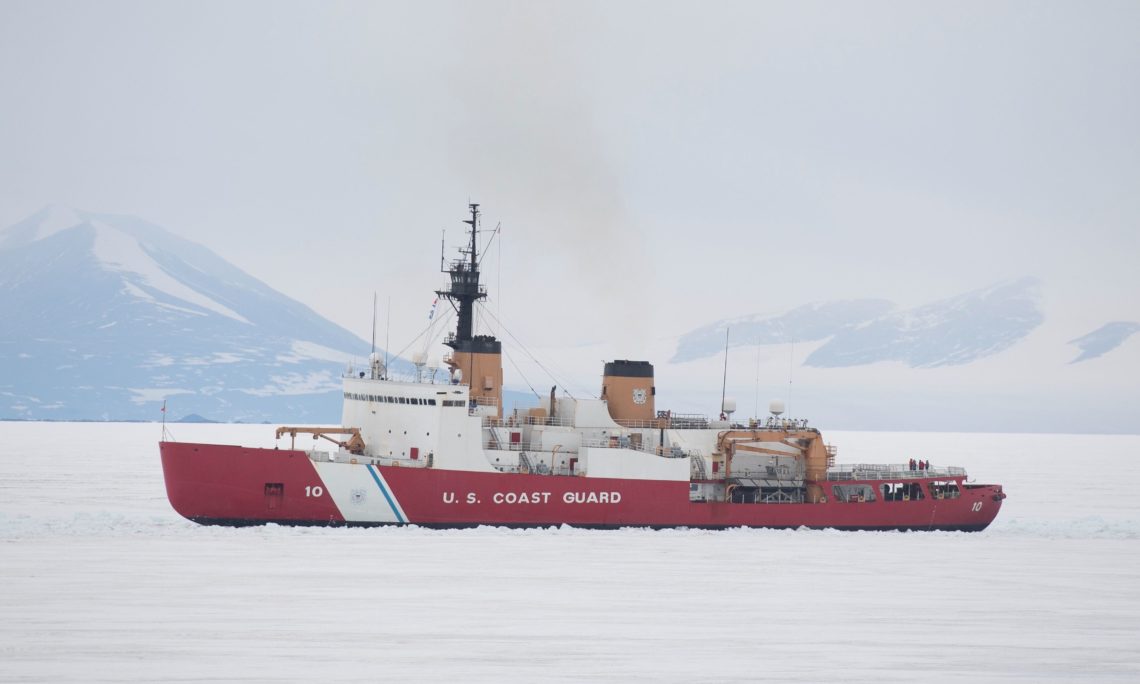 The U.S. Coast Guard Cutter (USCGC) POLAR STAR (WAGB-10) will make a port call in Wellington next week.  The United States has been granted New Zealand’s permission for the POLAR STAR to visit after completing its seasonal operations in support of the National Science Foundation-managed U.S. Antarctic Program.

“Each year the USCGC POLAR STAR breaks a channel through the sea ice of McMurdo Sound to allow a cargo ship and fuel tanker to resupply the scientific programs on the ice.  The icebreaker then escorts these ships safely in and out of the area,” says the United States Ambassador to New Zealand, Scott Brown.

This annual resupply allows for year-round scientific activities in Antarctica and is critical to the operation of New Zealand’s Scott Base and the U.S. base, McMurdo Station.  In turn, McMurdo Station serves as a logistics hub for various field camps and for Amundsen-Scott South Pole Stations (800 miles or approximately1300 kilometers inland from McMurdo).

“This year U.S. – New Zealand cooperation was taken to a new level with NZDF personnel travelling on board the U.S. vessels as part of the resupply mission,” Ambassador Brown said.

The Royal New Zealand Navy’s maritime sustainment capability vessel, Aotearoa, currently under construction in South Korea, will be a regular visitor to Antarctica.  An ice-strengthened vessel, the Aotearoa would need to be an ‘escorted vessel’ on any trip to the continent, relying on an ice-breaker like the POLAR STAR to cut a channel and provide escort for her from the edge of the ice sheet to her destination.

With this in mind, Captain Simon Rooke, Commanding Officer designate of Aotearoa, has been on board the U.S. cargo ship MV Ocean Giant on its recent trip down to the Antarctic.  The U.S.-owned MV Ocean Giant is also an ‘escorted vessel’, allowing Captain Rooke a unique perspective on how he will be navigating the ice when commanding Aotearoa.  Two additional RNZN personnel, Aotearoa’s Engineering Officer and Chief Bosun’s Mate, were also aboard the MV Ocean Giant, getting a firsthand look at how this process works. On the other side of this operation, Aotearoa’s future navigator was on board the POLAR STAR to get a better understanding of icebreaker escort operations, creating a channel through sea ice, and how escorting a ship works in the real world.  A RNZN engineer joined POLAR STAR for the transit back to New Zealand.

As well as resupplying and refueling in Wellington, the icebreaker will host school groups and Girl Guides while in port. The ship’s cook will also speak to catering students about what culinary expertise and planning is required for a ship.

This is the fourth visit of a U.S. ship since 2016:  The USS SAMPSON visited in November 2016 to mark the 75th anniversary of the Royal New Zealand Navy; the POLAR STAR called in to Lyttelton in February of 2017 on its return from Antarctica, the POLAR STAR returned to Lyttleton in January of 2018 and will now call in to Wellington next week.

Ambassador Brown says the possibility of any future U.S. ship visits to New Zealand would continue to be considered on a case-by-case basis by the two countries.

“Any conversations about the possibility of future visits will focus on practical cooperation, friendship, and advancing shared interests,” he says.

For photos of the Wellington visit…