Home Home / News & Events / Event – The Human Connection:  World War I Messages To The Future, Left In Darkness For 100 Years. 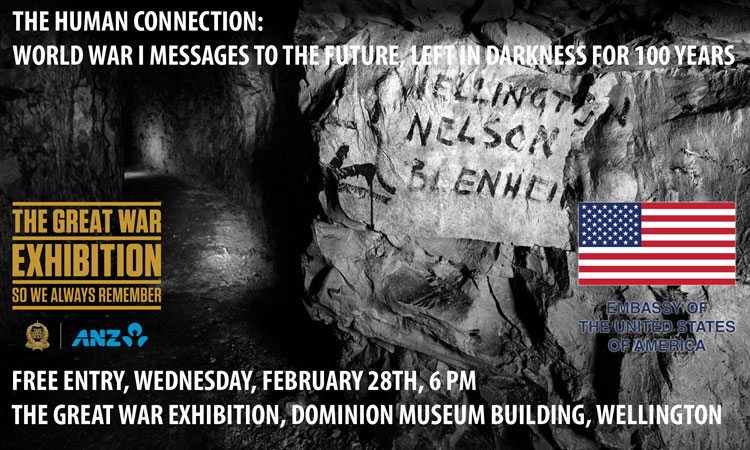 The Human Connection:  World War I Messages To The Future, Left In Darkness For 100 Years.

In 2014, National Geographic Photographer, Emergency Physician & Explorer, Dr. Jeff Gusky made a startling discovery. The underground site with the most WWI soldiers inscriptions anywhere on the Western Front was filled with century-old, handwritten messages by ANZAC soldiers. ANZAC forces hold the record as most prolific, having written more graffiti than any other army of WWI.

The most prolific American WWI unit was New England’s Yankee Division, which included Native American heroes who volunteered to fight though they would not be offered citizenship until years after WWI. They left behind emotional carvings reflecting their ancient tribal traditions in underground cities in Picardy, not knowing that other native peoples like the New Zealand Maori were also contributing to the war effort and leaving their mark underground 100 miles north in Arras.

Thousands of WWI soldiers lived in hundreds of underground cities throughout The Great War. The vastness of this network of WWI underground cities is still largely unknown. Now in total darkness, these are time capsules which form a direct human connection between then and now. The passage of hundred years seems like only a day. Once illuminated by electric lights, the walls of these underground cities contain beautiful works of art carved by soldiers who reconstituted a human world underground as the world’s first modern mass destruction raged on the surface.

Dr. Gusky’s presentation will take the audience on an emotional journey to experience The Hidden World of World War I. He invites you to help him gain a deeper understanding of those who travelled to France ‘From the Uttermost Ends of the Earth’.