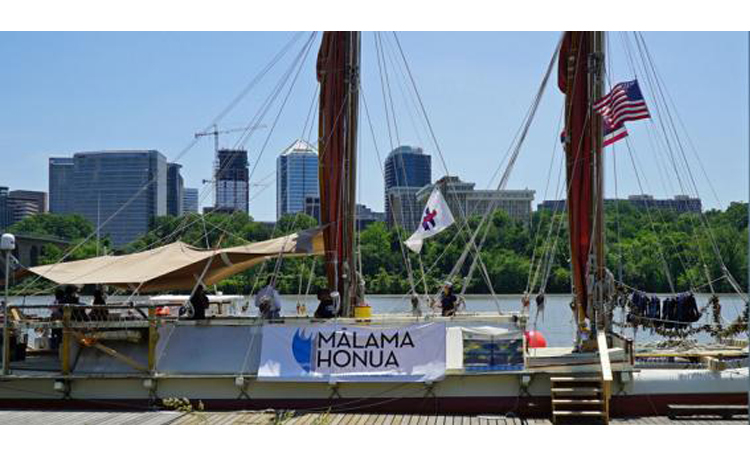 A view of the traditional Polynesian double-hulled canoe Hōkūleʻa docked at the Potomac Canoe Club, during the crew's visit to Washington, D.C. [State Department Photo]

Repost from DipNote – by Nicole B. Grajewski.

In the State Department’s Bureau of Oceans and International Environmental and Scientific Affairs (OES), a day in the office could mean a day onboard a traditional Polynesian double-hulled canoe with an Under Secretary of State, Foreign Service Officers, international diplomats, and the Polynesian Voyaging Society. While the inner-workings of U.S. diplomacy seldom occur on a canoe that uses celestial navigation, the confluence of cultures and backgrounds onboard the Hōkūleʻa represented the diverse effort to ensure a sustainable future for our interconnected ocean.

Bound by the common goal to conserve the ocean, Under Secretary of State for Economic Growth, Energy, and the Environment Catherine A. Novelli and diplomats from New Zealand, Fiji, the Federated States of Micronesia, Chile, and the United States joined the crewmembers of the Hōkūleʻa during their visit to Washington, D.C. on May 24. Since departing from Hawaii in 2014, the Hōkūleʻa has traveled nearly 24,000 nautical miles of the ocean’s surface including 12 UNESCO Marine World Heritage sites and 65 ports in 14 countries. Symbolic of the State Department’s commitment to the ocean, Under Secretary Novelli presented the crewmembers with a “message in a bottle” from Secretary Kerry urging that we protect our ocean. As the Hōkūleʻa continues its voyage northward to New York City, the crew members will deliver the Secretary’s message to the United Nations for World Oceans Day on June 8.

For a student of international affairs whose foreign policy idols include luminaries such as George Kennan and George C. Marshall, my internship at the State Department has not only inspired me; it has also provided me with an unparalleled tangible application of my studies. Equally so, working alongside intelligent and dedicated Foreign Service Officers as well as Civil Servants who serve as the foundation of U.S. diplomacy has introduced me to a new set of role models. The State Department encourages its interns to actively learn the diplomatic process through participation in high-level strategic planning and engagement in policy implementation. While my passion for the Arctic, maritime law, and Article 76 of the United Nations Convention on the Law of the Sea (UNCLOS) served as an impetus for me to apply for an internship in OES, I have gained a deeper understanding of issues that were previously unknown to me such as the negative effects of overfishing and ocean acidification.

I have since become more aware of the reality that the ocean faces profound challenges as a result of climate change, overfishing, and marine pollution. As ice melts in the Arctic, rising sea levels affect the livelihoods of coastal communities across the globe, as well as marine environments such as those in Hawaii. Though the ocean occupies almost three-quarters of the Earth’s surface, the inextricable tie between all its waters -– regardless of geographic distance -– and the impact of human activity everywhere underscore the challenge. Furthermore, ocean issues transcend national borders. The scale of these challenges necessitates a solution through international cooperation and engagement with governments, civil society, and other key players.

Secretary Kerry’s acute understanding of the importance of the ocean led to the first Our Ocean conference in 2014, which served as a mobilizing forum for governments, individuals, NGOs, and businesses to make tangible commitments for a sustainable future. Secretary Kerry will host the third Our Ocean conference in Washington, D.C. September 15-16. On the Hōkūleʻa, Under Secretary Novelli echoed the message of the Our Ocean conferences: “The ocean provides the air we breathe and the food that we eat; regulates our weather; and touches everybody, even people who are not physically located next to the ocean.” As we prepare to celebrate World Environment Day on June 5, from Foggy Bottom to the high seas, the health of the ocean impacts us all and we all have a role -– from raising awareness through traditional Polynesian navigation methods to buying sustainably caught fish while avoiding single use bottles and bags to ratifying diplomatic agreements — in supporting our ocean.

About the Author: Nicole B. Grajewski currently serves in the Bureau of Oceans and International Environmental and Scientific Affairs’  (OES) Office of Policy and Public Outreach.