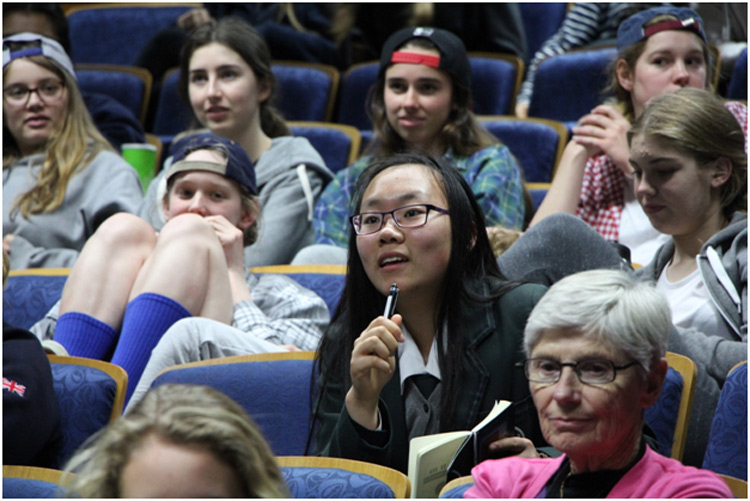 Despite all the progress that has been made in recent decades, civil rights and the status of minority groups in society still remains an important issue that needs to be addressed in America and around the world. Here at the Embassy we are passionate about engaging with these issues and having this discussion on a global level.

On September 17, 2015 Megan Salmon, an American Embassy representative spoke to Year 10 to Year 13 girls at St. Cuthbert’s College. The presentation was a part of the “American Insights” Speakers’ Program run by the U.S. Embassy and Consulate General. The program aims to add value and a personal connection to New Zealand school subjects with a U.S. element.

Ms. Salmon’s presentation, entitled “Women and U.S. Civil Rights Movement,” began by tracing the history of the American civil rights movement that was fought on all fronts—in courts, through protests, and by mobilizing minority communities. Ms. Salmon focused on the impact powerful women such as Rosa Parks, Dorothy Height and Fannie Lou Hamer had on the movement. These female role models especially resonated with the girls of St. Cuthbert’s who are dedicated to “by love serve” (their school motto).

Despite progress, Ms. Salmon emphasized that in 2015 we are living in a new era of civil rights movements. “Black Lives Matter” and “Hands up don’t shoot” movements have occurred in reaction to police and societal violence against African-Americans. Juxtaposition of the American civil rights movements in the 1960s to those of 2015 provoked great thought and discussion amongst audience members.

St. Cuthbert’s students drew parallels between America’s treatment of African-Americans, New Zealand’s treatment of Asian immigrants, and Australia’s treatment of Aboriginals. While recognizing each country and community faced unique situation-specific challenges, certain similarities in countries’ dealings with minority communities remained. Teachers appreciated Ms. Salmon’s refreshing perspective as a biracial female on these issues, noting it was a perspective they could not have easily accessed or taught otherwise.

Overall the presentation was a valuable exchange of ideas and discussion on minority issues, fruitful for America and New Zealand.