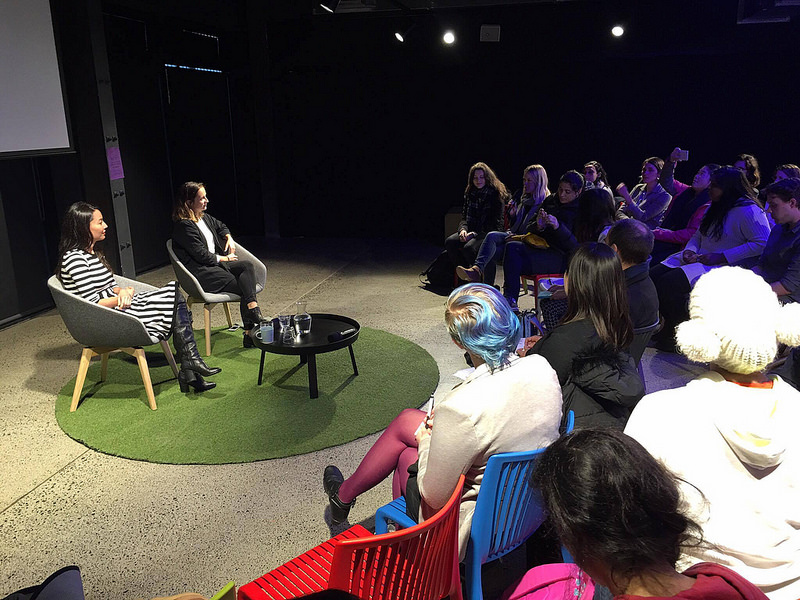 Adriana Gascoigne, Founder and CEO of Girls in Tech, recently visited New Zealand to keynote at Project Connect in Auckland and Wellington – a speaker series founded by the U.S. Embassy and the Auckland University of Technology’s (AUT).  Alongside the Project Connect talks, Adriana had a series of meetings, round-table discussions and dinners throughout the country – including a dinner at the U.S. Consul General’s residence with the Auckland Consular Corps and at AUT with Auckland’s leading business women; meetings at the The Mind Lab and with the U.S. Embassy’s Youth Councilors; a talk at GRID Auckland, BizDojo Wellington, Creative HQ Wellington, The Ministry of Awesome Christchurch, St Margret’s College Christchurch, the Christchurch City Council and Jade Software.

Girls in Tech (GiT) is a San Francisco-based non-profit organization devoted to empowering, educating and mentoring women in the tech industry across over 60 chapters internationally. As well as being the Founder of GiT, Adriana is also a partner at Founders Den in the heart of San Francisco’s SOMA district where Girls in Tech’s offices are located. No stranger to growing brands and building amazing companies, Adriana has also served in executive roles at RxMatch and QwikCart, Ogilvy & Mather and SecondMarket, the largest secondary trading platform, where she was responsible for branding strategy, event production and digital media efforts. In addition to working with technology start-ups like Indiegogo, SGN, Algentis, Democracy.com, Swyft, ImpulseFlyer and GUBA, Adriana has served as a strategic advisor for companies like NexTravel, StartupStockExchange, Numiyo Technologies, Palindrome Advisors, CharityBlossom, DooChoo, and Change.org. She is also on the advisory boards for Nailbot, Cocoon Cam and Roost.

Over 120 people turned up to hear Adriana speak at the Auckland Project Connect entitled “How Empowering Women is Supercharging the Future”. The evening started with a presentation by Adriana where she shared statistics that highlighted the lack of gender diversity within the tech industry and the theories/research about the root causes of these issues, including gender stereotypes, hostile macho or “brogrammer” culture, isolation (lack of role models) and lack of effective sponsors. Adriana also shared solutions of how this culture can change through improved education, championing more role models, challenging the negative stereotypes and strengthening networking and mentoring opportunities. Adriana then talked about the GiT’s proprietary programs, like entrepreneur boot camps, pitch events and renowned conferences, and how they are lifting and empowering women around the world. A “fireside chat” followed Adriana’s presentation with nano technologist and Founder of OMGTech!, Dr Michelle Dickinson, who also fielded questions from the audience. Adriana also learnt some kiwi slang and was able to fit in a ‘sweet as’ during her presentation, which went down well with the kiwi audience.

The next day Adriana met with the Founder of The Mind Lab, Frances Valintine, and its Auckland General Manager Fee McLeod. The Mind Lab by Unitec is a unique education collaboration between a public education provider and a specialist education lab dedicated to enhancing digital literacy capability and the implementation of contemporary practice in the teaching profession. Adriana, Frances and Fee shared stories and best practices from their combined experiences in the tech mentoring and teaching service industry.

After a lunch with AUT representatives, Adriana was off to meet with some of the Embassy’s Auckland based Youth Council where they had the opportunity to participate in an informal discussion with Adriana at the Auckland Gallery cafe. Adriana shared her personal experiences with travel, education and how these experiences have shaped her life today. She encouraged students to use their passion and creativity to propel them through all endeavors. The students were thankful for the time to ask personal questions and receive applicable advice.

Then it was off to an early evening Q and A session at GRID Auckland with Activation Manager, Eva Perrone and an audience of 40+ female startup Founders, entrepreneurs and students looking to take the plunge into the startup world. During this session Adriana shared her career history and also how her entrepreneurial parents are her biggest role models.

After the GRID session, Adriana spoke at the first meeting of women in the Auckland Consular Corps hosted by United States Consul General Melanie Higgins at her residence.  The networking event featured Adriana as a guest speaker and her talk focused on the international efforts of GiT to work with local bodies around the world to increase educational opportunities for young women while encouraging them to pursue degrees and careers in the tech sector.  Adriana discussed some of the hurdles that women have had to overcome in this field in the U.S. and the progress being made.  A lively discussion ensued around the importance of mentoring and the challenges of changing subcultures in the school and work environments.  The Consular Corps was grateful to hear about Adriana’s efforts and encouraged by her successes, they will stay tuned to see how they can become involved with a New Zealand chapter of GiT should it come to fruition.

The next day it was off to Wellington for a series of talks starting with a Collider Wgtn discussion at the co-working space for innovative startup companies, BizDojo. Collider Wgtn is a local Government funded initiative within Bizdojo that has a focus around connecting thought-leaders who inspire action with like-minded creative, digital and tech entrepreneurs. Over 20 women from various business, government and academic backgrounds turned up to listen to Adriana share her story of GiT and how her entrepreneurial parents encouraged her to take the necessary risks to start and then expand the GiT chapters globally. Following Adriana’s talk, BizDojo Wellington Regional Manager, Jessica Manins, moderated an informal discussion around the need for gender diversity in STEM fields.

After a quick lunch it was off to Creative HQ (CHQ)  – a startup base dedicated to increasing the number of high growth businesses in New Zealand through incubation and acceleration programs. Adriana spoke to a group of 20 entrepreneurs followed by a Q and A session moderated by Laura Reitel – Creative HQ’s startup community manager and the Program Director for the Lightning Lab XX 2016 program ( a 4 month accelerator program for women Founded startups). During the session, Adriana shared with the group entrepreneurial advice and a selection of productivity tools she uses on a regular basis.

While at BizDojo and CHQ, Adriana met with Samantha Jones, Founder of Little Yellow Bird (LYB) – a startup company that produces create quality ethical corporate workwear. Fresh from graduating from the recent Lightning Lab XX 2016 program, Samantha was one of three New Zealand entrepreneurs chosen by the U.S. State Department to attend the Global Entrepreneurship Summit 2016 (GES2016) in Silicon Valley in June – an event Adriana spoke at, alongside the likes of President Obama and Mark Zuckerberg.  Adriana and Samantha never had a chance to connect at GES2016, but did so in New Zealand…

The following morning Adriana spoke at the second Project Connect, sponsored by the Trans-Tasman Business Circle (TTBC), Baldwins Intellectual Property Law and Whitireia New Zealand. The event, at Baldwins, was in front of an audience of 40 including U.S. Ambassador Gilbert and Public Affairs Officer, Rob Tate. After welcomes from the Ambassador and Baldwins Partner, Penny Catley, Adriana gave a presentation followed by a Q and A session and breakfast. Thanks to Melinda Lim and Caitlin Busby from TTBC for organizing the Project Connect event.

That was the end of the Embassy programming, but Adriana’s New Zealand visit didn’t stop there. After a quick trip to Queenstown and Milford Sound, Adriana spoke to large audiences in Christchurch at The Ministry of Awesome Christchurch, St Margret’s College Christchurch, the Christchurch City Council and Jade Software. Adriana spoke about GiT and its dedication to empower and enable women in technology careers and STEM fields.

Thank you for your time in New Zealand Adriana. We hope you had a ‘sweet as’ time and made many life long connections with some of New Zealand’s leading, as well as up-and-coming, female entrepreneurs.

Details of the up-and-coming Project16 conference can be found at the-project.co.nz.
Learn more about Girls in Tech at girlsintech.org.