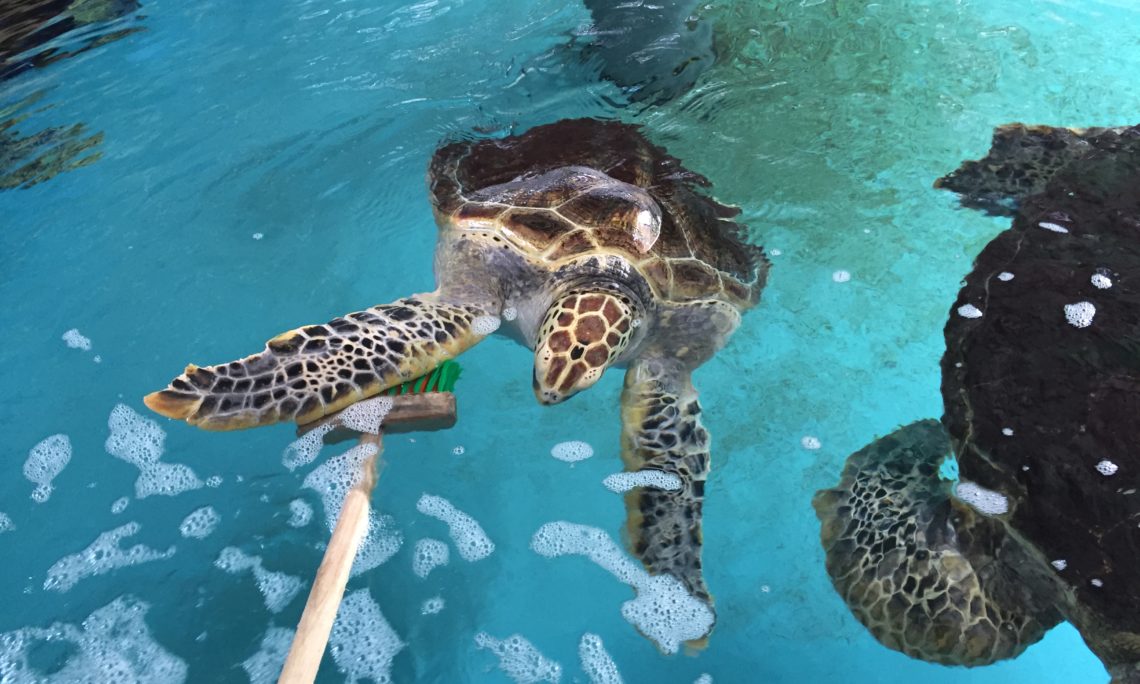 This is Dolores, the sea turtle named after me in Kumejima. She has a heart on her head! Photo credit: U.S. Department of State.

My brother-in-law is crazy about turtles. I’m not sure why, or when his passion for the weird reptiles began, but through the years it has given his friends and family an easy out for gift-giving on every occasion. John will always be happy with a turtle-adorned, turtle-shaped, or turtle-related product. Sort of like me with Pokémon.

As a result of John’s turtle love, I notice turtle stuff. You probably know someone like this. They collect cows or lighthouses or spoons. But what’s odd about turtles is I sort of became interested in them on his behalf. I take pictures of turtles when I see them in the wild, knowing they will bring a smile to his face. I buy turtle souvenirs whenever possible, sometimes saving them up for an upcoming holiday when they will be boxed up and sent to my sister’s house.

When I was posted to Brazil, I went to a lovely island called Ilhabela for a weekend. There I discovered an organization called Project Tamar’s booth. Their booth was busting with turtle stuff.

If you didn’t already know, sea turtles are endangered. There are five species native to Brazil, and Tamar was founded in 1980 to protect them and encourage and assist in increasing their numbers. Why are these turtles endangered, you might ask, when they’ve been around for millions of years? Well, the world, and as a result, their environment, is changing.

Fishermen are the biggest threats to sea turtles, with their hooks and nets that can maim or drown them. And turtles, well, they aren’t that smart. Their brains are about the size of the “O” you can make with your thumb and forefinger, and it seems like most of that grey stuff is used for their amazing internal navigation systems. Did you know sea turtles sometimes come from Africa to nest in South America? Neither did I, but four turtles tagged in Gabon showed up on the Brazilian shoreline a few years ago to lay their eggs. That’s quite a trip.

Tamar’s booth on the island was offering sea turtle adoption. You basically got a certificate and t-shirt saying you had adopted a sea turtle, and lots of other bonus tchotchkes for the low low price of R$100. John’s birthday was in a few months, so I was easily taken in. What was interesting was the Tamar rep was totally adamant about educating me, more so than selling to me, and he talked at length about their mission and suggested my turtle-obsessed relative should visit Ubatuba’s Tamar base. I agreed whole-heartedly, although unfortunately that wasn’t a possibility for John, and I personally didn’t have time on that trip.

Then when I went up to Bahia for Carnaval the following year, I read about Tamar’s headquarters based in Praia do Forte, fifty kilometers outside of Salvador. The consulate had ordered turtle tags (little metal clips that identify turtles) for them and as a result we had a contact there. Luciano was extremely knowledgeable and personable, a characteristic I would come to find was consistent with pretty much everyone who loves sea turtles. Something about people who devote their lives to saving turtles seems to attract the cream of the gracious crop. Our host gave us a guided tour of their facilities, both public and private, their veterinary operation, showed us a nest hatching, and taught me more about turtles in one afternoon than I ever expected to learn in a lifetime. But the best was yet to come.

That evening, I had the pleasure of accompanying the staff veterinarian and Luciano, a biologist, on the night patrol and a hatchling release. During nesting season, the staff drives up the most popular stretches of beach with the turtles to check and see where they are laying eggs. If a nest is in danger, it will be relocated to the Tamar facility. If not, it is marked, observed, and protected against predators until the hatchlings make their way to the surface.

Night patrols really means all night. From about 8 pm until 3 or 4 in the morning. So it’s dark. Stars like you’ve never seen, and the pitch is only cut by the hand-held searchlight that the staff take turns holding as the 4×4 bumps along the sand. When a mommy turtle is found, it is measured, examined for health problems, and tagged.

The highlight of that excursion was the hatchling release. There are regulations about light pollution on the beach, as baby turtles find their way to the ocean by the moonlight on its surface. Imagine a hundred baby turtles clamoring for the ocean all at once. They climbed over my feet and smacked into each other. It was a grand chaos, as they stumbled and flippered their way towards Luciano’s headlamp as he stood in the surf to help the babies find the ocean.

It was an adorable demonstration of instinct and determination. I fell in love with each and every one of those hatchlings, and although I know deep down from my Tamar education that only one baby in one thousand lives to adulthood, I told myself that night that every single one of those silly things was going to be a survivor. These turtles would defy the odds. They were MY babies the moment I picked one directionally-challenged infant up and turned it towards the sea. My litter of turtles was going to be the smartest, most resourceful group of scholars in the Atlantic. No mean fish or nasty birds would get them. They would prevail, and someday, like a well-armored army, they would return to this beach and propagate my turtle lineage. John may have adopted one turtle, but I’d just adopted a hundred.

When the last little blotch of black had flapped its way into the waves, we grinned stupidly up at the crush of stars and wished our hatchlings well as we repaired to the vehicle. There were no turtles nesting that night. Perhaps they all were waiting in the water to show the new babies the best places to eat and how to do the backstroke. At least I hope that was the case.

Upon leaving Praia do Forte, I realized with amused resignation that Tamar had turned me into a full-fledged turtle lover. What had started as curiosity by proxy had developed into genuine affection.

Now that I’d been bit by the turtle bug, it was only a matter of time until I visited the base in Ubatuba. With some friends coming from out of town, I had the perfect excuse for a turtle-centric vacation. We headed north. Luciano had graciously informed the Tamar staff there of our visit, and the second part of my sea turtle saga began.

On a rainy Friday, Henrique met us at the Tamar visitor center entrance. Red-headed and barrel-chested, he looks more like he should be drawing drafts in a Hofbrauhaus than being a turtle EMT, but that’s exactly what he does.

Once again, we got a guided tour and trip to the turtle hospital. The difference with Ubatuba’s base is they have more extensive medical facilities. This is because although sea turtles nest up north, in Ubatuba they primarily feed. They are constantly being caught by fishermen on accident, sometimes being damaged or killed in the process. After a long time when Tamar debated allocating funds that might be better spent on fisherman education than individual turtle rehabilitation, the clinic was opened a few years ago. Now they can heal torn flippers and get rid of shell rot. Each sick turtle has its own little pool and a staff of concerned vets and interns taking care of them. Babies and adults alike are admitted, treated, and then released back into the ocean.

So instead of protecting nests, Henrique’s team works primarily with turtle rescue. He promised we could accompany the team if they got a Turtle 911 call during the weekend. We hoped they wouldn’t, cause no one wants a hurt turtle, but we also sort of hoped they would, just to be a part of it.

A fisherman had caught a turtle in his net. It had almost drowned, and Tamar was on the case. Henrique picked us up and we were off to Praia do Cedro. There we found a young Hawksbill gasping for breath in a dilapidated canoe. Snappy, as he soon was christened (spelled “Snap” if you are Brazilian), was turned upside down and a thin stream of water drooled from his beak. I was concerned, but apparently he wasn’t too poorly off. He still needed help though, so we put him in a plastic tray and carried him uphill to the truck. The trip back required group effort. We kept Snappy from slamming into the sides of the tray along the pockmarked road by keeping our hands on his shell. We also held the tray level across three sets of knees.

When we arrived back at Tamar, Snappy was whisked into the clinic and put in a turtle oxygen tent. Seriously. A few days later, he was doing much better, even a bit aggressive, which is normal for a Hawksbill. Upon his full recovery, he returned to the sea, but I still check up on his tag every once in a while.  After all, once you save a turtle’s life, you’re forever responsible for it, aren’t you? Or maybe that’s a Wookie? In any case, Snappy has been added to my extended turtle family, and I am confident he’s gonna make it.

The following day, Henrique took us up the coast to the northern boundary of the fishing grounds. We visited sparsely populated beaches and villages whose only livelihood was fishing. Families live off the ocean, selling their catches to huge seafood consolidators for distribution throughout the country. When turtles are accidentally caught, it causes problems for both the fisherman and the turtle. Time is wasted, and a hook or net intended for a fish is wasted. To help everyone avoid these accidents, Tamar educates the locals and attempts to reduce the numbers of animals caught. New types of hooks and nets are important in the fight against extinction, and have made a great impact in recent years.

When the weekend was over, Tamar and Henrique had created more turtle fans and saved another animal from death. The dedication and enthusiasm of these people was infectious, and I continued my evangelical advocacy for the conservation of sea turtles at my next posting, in Gabon, then in São Tome & Principe, and after that in Japan’s most southern prefecture, Okinawa. In Africa, I worked with U.S. visiting sailors to build protective barriers to keep sea turtle eggs safe from predators. In Japan, from Amami to Yonaguni, I worked with local NGOs to spread the word about the brilliance and joy of these living dinosaurs. One of the great honors of my life was having a sea turtle named after me at the aquarium in Kumejima in recognition of my conservation efforts!

Now, here in Wellington, we don’t have sea turtles. Lots of amazing wildlife and sealife to love, though! And just because they don’t swim in our waters doesn’t mean we can’t celebrate them, love them, and work hard to protect them! Do your part! Keep our oceans clean, respect all living things, and surrender to the awesome that is the majestic sea turtle!

What Can You Do to Save Sea Turtles?