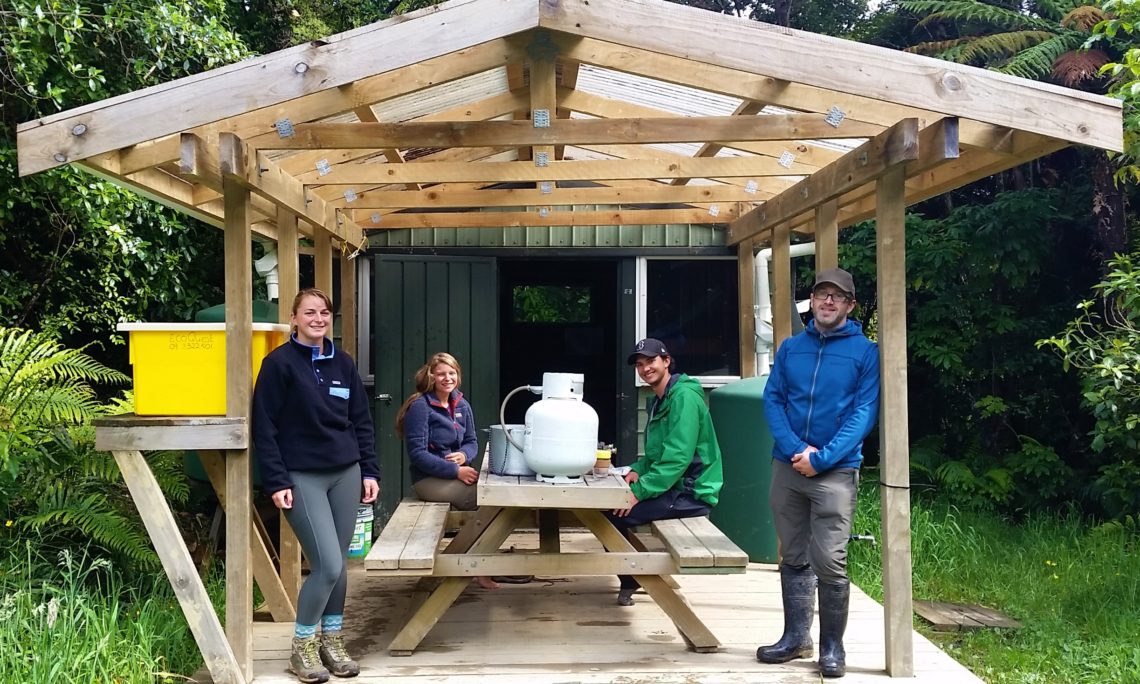 Guest blog by David Clarke of the EcoQuest Education Foundation.

EcoQuest Education Foundation Te Rarangahau Taiao (EcoQuest) is a Charitable Trust, registered with the Charities Commission. We have a commitment to service learning, providing students from the United States with opportunities for learning through real life case studies and research in a new environment in Aotearoa New Zealand.  Our students get a rigorous grounding in ecology, policy and resource management and have the opportunity to take part in real-time projects through field exercises as well as research during the final five weeks of their semester. All research projects offered by EcoQuest have societal and scientific relevance. Our campus is located in Kaiaua, which is on the doorstep of the Hūnua ranges. We are a very active part of our community and have a trusting relationship with many private landowners in the area through previous environmental field studies and research projects.

In September 2017, EcoQuest was successful in our application for funding through the U.S. Embassy New Zealand Small Grants to carry out important research on one of New Zealand’s rare and endemic species, the long-tailed bat (pekapeka tou roa, Chalinolobus tuberculatus). Long-tailed bats are one of only two species of native mammals in New Zealand (the other being the lesser short-tailed bat, pekapeka tou poto or Mysticinia tuberculata) and are classified as ‘Nationally Vulnerable’ in the North Island. A third species, the greater short-tailed bat (Mysticinia robusta) has not been seen since 1967 and unfortunately is widely believed to be extinct.  New Zealand bats are nocturnal and elusive animals, and are rarely seen or heard. In fact, many New Zealanders are unaware that bats even exist in this country! Sadly, they are often one of the forgotten species in the realm of conservation here. Like other native species, bats are in decline for a variety of reasons, including habitat loss and predation by invasive pests such as rats and stoats. Since local bats have not been studied as much as our as endemic bird species, a lack of understanding surrounding the bat’s habitat requirements, foraging behaviour, and location of roosting sites is a real concern. The significance of pekapeka is evoked in the following whakatauaki in reference to night travellers.

Thanks to this wonderful research opportunity provided by the U.S Embassy, our students have just completed a survey on long-tailed bats in the Hūnua Ranges, an Auckland Regional Park of 250 square kilometres in area. Prior to our study, relatively little research had been undertaken on bats in this region, an interesting scenario considering that past surveys have earmarked the Hūnua Ranges as a potential hotspot for long-tailed bat activity in the North Island. The grant enabled us to purchase ten automatic bat monitors, electronic devices which record echolocation calls emitted by the bats as they hunt for food and socialise at night. We positioned these at various sites within the Regional Park, in addition to one which we placed on a parcel of private land located not far from the Ranges.

The survey was a huge success, with our monitors recording a total of 2,243 bat passes over ten days of surveying.  To our delight, bat activity was recorded at every site we examined, including the one located on private land. In addition to recording so much bat activity, we also stayed a night at Piggott’s campground located at the heart of the Hūnua Ranges, and were fortunate enough to witness several bats emerging from their roost tree to start hunting for the evening. It was magical!

Thanks to this grant, these funds have enabled us to drive some very important conservation work on bats which will be significant on a local, regional, and national level. We are now in a position to monitor long-tailed bats in our area on an annual or possibly biannual basis, which will help to form a comprehensive understanding on where the bats are, what their activity levels are, and what conservation measures should be put in place to ensure their continued survival. As the monitoring programme becomes well established, it is our vision to involve our community and local iwi Ngāti Pāoa Ngāti Whanaunga as much as possible. As the existence and knowledge of bats in New Zealand is either unknown or little understood among the general public, it is also our goal to educate people on these elusive mammals  and ultimately, to enable them to take ownership in protecting this taonga for future generations.

Without the help of the U.S. Embassy & Consulate in New Zealand, this seminal research would not have been possible. Thank you!