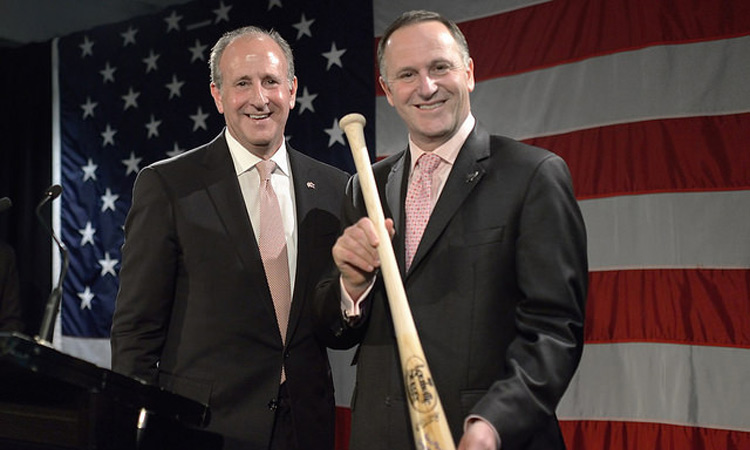 Embracing the enthusiasm for sports that is such a feature of both American and New Zealand culture, the Embassy in Wellington and the Consulate General in Auckland kicked off a two-day celebration of American Independence Day. Our celebrations this year were made even sweeter, as we were joined by a number of high-level officials from New Zealand and the United States, here for the Partnership Forum, and were able to share a special video message from Vice President Joe Biden to Americans here and the people of New Zealand.

Taking advantage of the presence of high profile decision-makers present in Auckland for this week’s United States-New Zealand Partnership Forum, we celebrated America’s 239th birthday a few days early – and the NZ -US team spirit was on full display.

The Partnership Forum was a major success, with representatives of government, business, civil society, the military, and academia coming together to discuss the positive state of the U.S.-NZ relationship, issues of mutual interest, and areas for expanding our cooperation. The Independence Day reception in Auckland was both the final event of the Partnership Forum, and a celebration of the ideals of life, liberty, and the pursuit of happiness enshrined in the Declaration of Independence. If the Forum focused us on universal values such as life and liberty, the reception offered a chance to shift gears and contemplate the pursuit of happiness – through sports and with good friends.

From the invitation to the event, modelled after a 1979 Baseball World Series entry ticket, through the American university sports “fight songs”, to the videos showing iconic American sports moments, the theme of the night reflected not just our two countries’ shared love of sports, but how sports can bring diverse communities together, be a catalyst for positive social progress, and inspire us to meet our full potential.

It was an honor to have Prime Minister John Key join us to officially bring the Partnership Forum to a close and start our Independence Day celebrations in style. In recognition of his presence, and in keeping with our sports theme, Ambassador Gilbert, a former professional baseball player with the Chicago White Sox, presented the Prime Minister with a special edition signed baseball bat.

Auckland Mayor Len Brown, who gave the Independence Day toast on behalf of the people of Auckland, received a token of appreciation as well. Having reminded the audience that the United States is still the reigning Olympic rugby champion (from 1920 and 1924), Mayor Brown received a ‘Gilbert’ rugby ball as a memento of New Zealand’s favorite sport. As a bonus, after three years of trying, the Mayor also managed to persuade Consul General Jim Donegan to part with his traditional July 4th Stars and Stripes tie.

In his remarks, Ambassador Gilbert spoke about some of the important values in sports and society: fairness and a level playing field; healthy competition and teamwork; playing by the rules; and equal opportunity for all to succeed, no matter where you come from – or where you are headed. He also highlighted another important anniversary: 25 years ago the landmark Americans with Disabilities Act was passed to guarantee equal access to people with disabilities.

Throughout the night, video screens showed great sporting moments and profiled men and women athletes, including Olympians and Paralympians, from a range of sports. Some friends of Ambassador Gilbert in the United States were able to join the party with special video greetings to the people of New Zealand. Daniel Webb, Adam Eaton, and Zach Duke with the Chicago White Sox talked about how meaningful it is to play baseball on Independence Day (view videos here). American Olympic Cross Country skier Andy Newell shared some of his favorite memories of the holiday. Dara Torres, who won 12 medals as the only American to compete in five Olympic games, reflected on what is important to her on the Fourth of July. And Edwin Mulitalo, who played with the Super Bowl champion Baltimore Ravens American football team, explained why this day makes him feel proud.

Westpac Stadium in Wellington was the perfect venue to continue our sports-themed Independence Day celebration the following day. We were delighted to have Attorney General Chris Finlayson join us, and grateful for his warm words on our enduring friendship. We were all captivated by the beautiful and stirring renditions of our National Anthems performed by the Aotea Barbershop Quartet.

We would like to thank the nearly 900 guests that joined us in Auckland and Wellington to celebrate our Independence Day anniversary – and what better place to celebrate than in New Zealand, where our friendship is so strong. By honoring some of our sports heroes that overcame enormous obstacles to succeed, we are reminded that there is no challenge our two great nations can’t face when we team up.