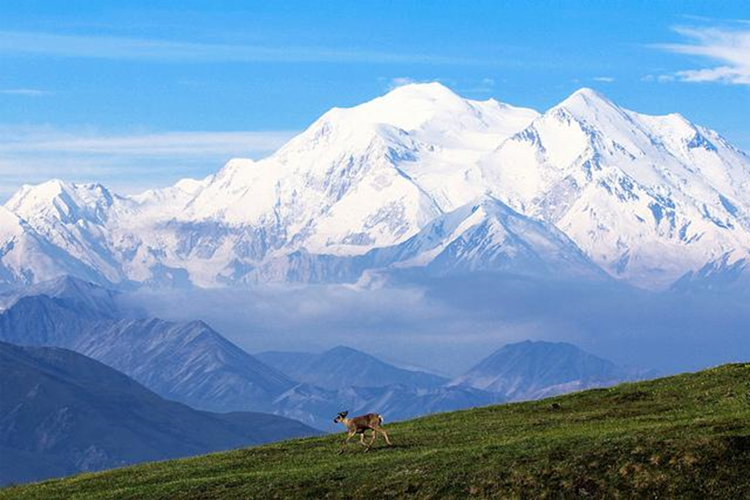 (Courtesy of the National Park Service/Daniel A. Leifheit)

Over the next year, leading up to the National Park Service’s 100th anniversary, our virtual intern, Ryan Valencia, will be publishing blog posts on various U.S. National Parks. This time, Ryan takes us to the Denali National Park and Preserve.

Journey to the Last Frontier, by Ryan Valencia.

At this very moment, Americans from across the mainland are preparing to escape to the tropics for their summer vacations. However, on the other extreme, in America’s most north and coldest state, thrill seekers are preparing to take on one of the greatest climbs of their lifetime in Denali National Park and Preserve. Denali is approaching its centennial as it was established in 1917. The park is located in Alaska, a state once referred to as “Seward’s Folly” by opponents of the United States’ purchase of the territory under the leadership of then-Secretary of State William Seward. But the opposition would soon be silenced as the territory proved to be a true treasure for its resources, culture, and natural wonders. Key amongst these wonders is “the tall one”, Denali.

Denali National Park and Preserve is an adventurer’s dream with much to offer; particularly its crown jewel, Denali. Standing at 20,310 feet, Denali is North America’s highest mountain. As a result, mountaineers from across the globe flock to here to conquer the treacherous climb. The climb takes around three weeks and is not for newcomers. Expeditions to the top require tough training, knowledge, and will.

The winter months allow for visitors to knock other items off their bucket lists. One of the activities on my own bucket list is mushing, or dog-sledding, which is when sled riders can be pulled by a team of trained dogs through this winter wonderland. Denali Dog Sled Expeditions is the only business allowed to guide mushing trips within the park for those who lack their own dogs and sled, so it is best to plan ahead. To explore the park in other ways during the wintertime, visitors can cross-country ski or snowshoe (as hiking in inches of snow might not be the most efficient use of energy). Additionally, when sufficient snow is on the ground, visitors can experience the park through snowmobiling.

During the summer months when the ground sheds its snowy shell and green emerges, hiking and camping are popular activities. Hiking can take place on or off the park’s many trails. If visitors choose to get off the marked paths, all you must do is return to the single road that exists in the park and wave down a passing bus in order to get back to civilization. For those wishing to stay overnight, six campgrounds exist within the park. Wonder Lake Campground is recommended for those wishing to get close to the mountain of Denali and is open only to tent campers. The view of the majestic mountain is well worth it.

A less common feature of the National Park system that is available within Denali National Park is the ability to fish without a license or permit. Visitors should note that fishing is limited to 10 fish per day per person. For more information on the park’s rules on fishing, visitors should visit: nps.gov.

Beyond the mountain of Denali, the true stars of the park are the creatures that call it home. Denali National Park and Preserve is a must-do park for those wishing to see wildlife and is often cited as one of the world’s best. “The Big Five” of the park include moose, caribou, dall sheep, wolves, and grizzly bears. It is recommended that visitors come in the spring and summer seasons when wildlife activity is at its height.

In addition to the fauna, one of the most unique sights of the park are the night’s natural light shows that are known as auroras. The Aurora Borealis, or Northern Lights, is a spectacular display of colors in the sky that result from the collision of electrons and Earth’s upper atmosphere. This show occurs throughout the entire year. However, for greater chances of seeing the Aurora Borealis, you should visit the park during winter months when nights are longer.

Denali National Park and Preserve is proof that adventure is still out there for the taking in the last frontier of America.