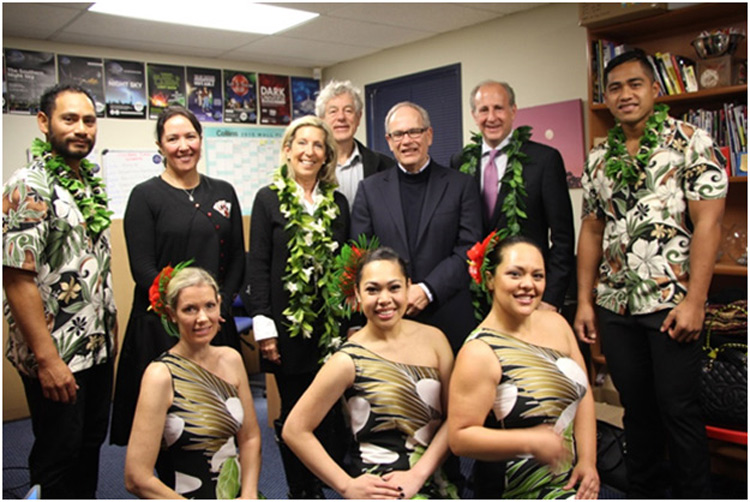 A little while back I had the wonderful opportunity to participate in the official opening of the Matariki Festival at the Dawn Karakia, alongside Auckland Mayor Len Brown and prominent Maori leaders. I had heard about the Matariki Festival prior to my arrival in New Zealand, and Nancy and I were excitedly anticipating the chance to be a part of it this year. Those of you that have seen my introductory video on the Embassy website may remember that I talked about how much I was looking forward to this, and I am happy to report that it exceeded my expectations.

We summited Maungakiekie—also known as One Tree Hill—early on the morning of June 20 to welcome the sunrise during a dawn service. Unfortunately, due to light rain and cloudy weather, we weren’t able to see the Pleiades constellation but we did hear Mana whenua kaumatua recite ancient karakia (traditional prayers) as well as chants and songs to commemorate our ancestors and future generations.

Known back home as Pleiades, the star cluster is better known in Aotearoa as Matariki. Due to the sun’s glare, this star cluster disappears from view in New Zealand before reappearing low in the sky in early June, heralding the Maori New Year. Around 100 people gathered on the summit this year to celebrate and prepare for the year ahead.

There is a close connection between Matariki and the Hawaiian celebration of Makahiki, and in fact have the same meaning. The close kinship between these two celebrations is another reminder of our shared Polynesian heritage, as well as the vast and beautiful Pacific, which touches both of our shores. It was a pleasure for the U.S. Embassy to support Matariki and highlight these shared cultural traditions.

Following the dawn karakia, we enjoyed a nice breakfast the Stardome Observatory, and learned more about the stars in the planetarium while celebrating the beginning of Matariki with song and dance. Rewi Spraggon, a host and chef from Maori Television, served as Master of Ceremonies. Several Maori speakers and Auckland Mayor Len Brown spoke about the important significance of Matariki.

In the spirit of sharing American and Polynesian culture, our Hawaii Village coordinators for the Pasifika Festival, Amo and Maile, and other group members performed Hawaiian dances following Mayor Brown’s speech. I then spoke about our shared oceans and the importance of protecting them for future generations.

While my remarks concluded formalities for the dawn karakia, it was not the end of my morning. Later, Nancy and I visited the Mangere Arts Centre, in Auckland’s Pasifika hub—Mangere. We met Maori artist Charlotte Graham and viewed her Kaitiaki (guardian) exhibition. Her connection to Manukau (the South Auckland area) is notable, and I was intrigued by relationships between the environment and its custodians and guardians symbolized in her work. Curator James Pinker also showed us other works of art and the wonderful theater in the center.

This visit to Auckland was a great opportunity for me to learn, experience, and celebrate Maori culture and traditions, and explore how cross-cultural exchanges bring our nations and people even closer.

This was a truly memorable experience. Now we have to find time to do experience some of the other items we mentioned in our video – skiing Treble Cone and tramping the Routeburn Track!