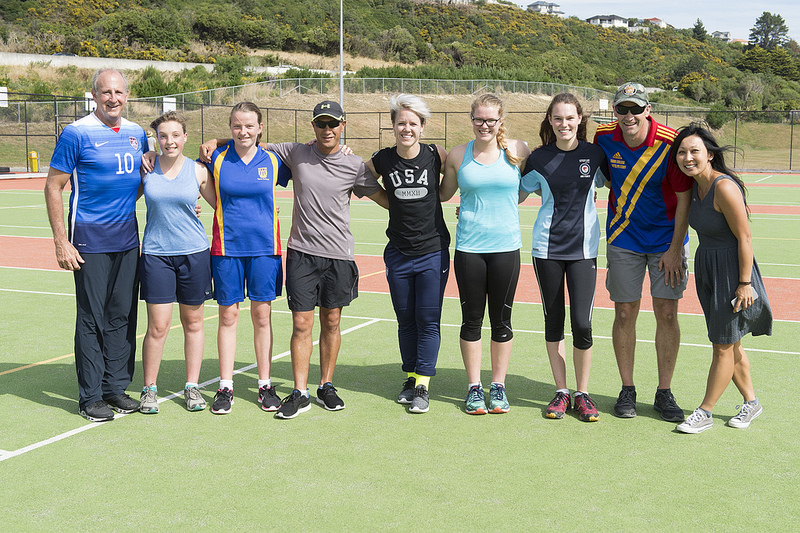 Ambassador Gilbert and Lori Lindsey have a kick around with the team at Wellington Girls’ College. Photo credit: U.S. State Department.

In partnership with the Department of State’s SportsUnited and Proud to Play NZ, United States Embassy New Zealand had the pleasure of hosting retired United States Women’s National Soccer Team midfielder Lori Lindsey in February 2016.  Throughout her successful career, Lori represented the United States at the Olympics and the World Cup.

During her week-long trip to New Zealand and Samoa, Lori met with students, aspiring soccer stars, Kiwi athletes, coaches and talent managers to share best practices, and describe her career journey as a professional athlete. She spoke about her experiences as an LGBT athlete and discussed how she has advocated for inclusion and diversity through sport.

Shortly after landing, Lori attended the ‘Proud to Play’ opening ceremony in Silo Park.  The ceremony included a powhiri by Ngati Whatua and prominent attendees such as MP Louisa Wall and Mayor Len Brown.  In addition to kicking off a number of competitions, the opening ceremony coincided with Auckland Pride Week festivities.

Lori awarded medals to Proud to Play competitors on stage at the Big Gay Out.  She also gave an inspirational speech to a number of youth, including leadership from Rainbow Youth, at a youth hui, citing recent examples of how discriminatory practices on the field have been addressed and overcome.

Lori’s visit was a great opportunity to talk about the importance of sport in America and the ability to promote diversity, inclusion, confidence and strength through sport.