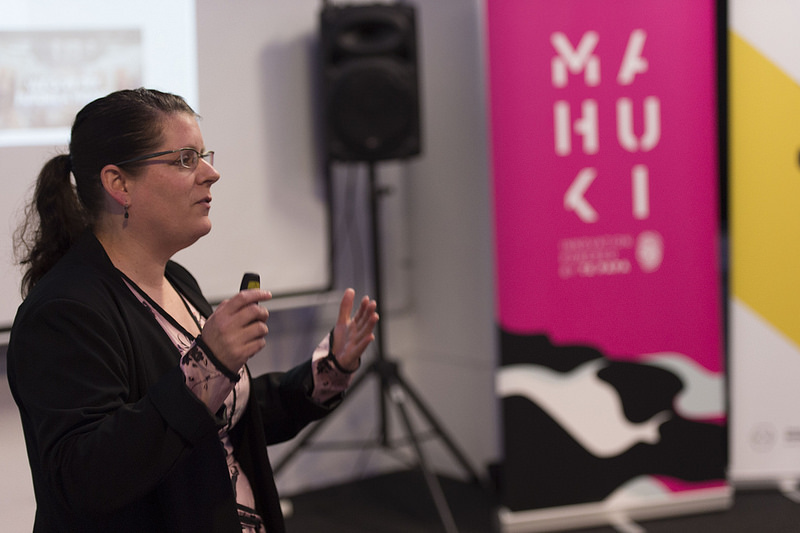 With Support from the U.S. Embassy, Entrepreneur-in-Residence at Florida State University and Creative Program Manager at Walt Disney’s Imagineering, Mk Haley, gave a series of talks in Wellington. The week was hosted by Mahuki – Te Papa’s innovation hub.

Mk Haley’s first talk – The Importance of Story in GLAM (Galleries, Libraries, Archives and Museums) with an audience of over 150 – explored what a story is, and why this is important for businesses and visitor facing entertainment experiences as well as setting the tone and culture within a team.

In Mk’s second talk The Experience Economy at Te Papa in front over 300, Mk explored the history of themed entertainment and how creating experiences generates a deeper levels of learning and happiness for audiences.

At the end of her busy schedule in Wellington, Mk – along with Mahuki managers Nicci Lock, Melissa Firth and Priscilla Loong from Mahuki –  met with Candy Green, the Chargé d’Affaires of the U.S. Embassy in Wellington to discuss the week’s successful program in Wellington.

Mk Haley has over 25 years’ experience as an educator on a variety of University programs including the Disney Imagineering – UCLA partnership in Themed Entertainment Design. This extensive experience and knowledge showed in her talks and workshops, with over 10 hours of talking time on a range of subject areas.

Professor Haley has been with The Walt Disney Company since 1994 serving primarily with Walt Disney Imagineering in both technical and creative roles with the Virtual Reality teams, R&D, Special FX, Show Quality Services, and the Disney Research Labs.

Mahuki is Te Papa’s innovation hub, with a focus on bringing innovation to the cultural sector. The program engages entrepreneurs and innovators to work with our cultural sector experts to build the GLAMs of tomorrow.

The reason for Mk Haley visit was an effort to promote Mahuki’s existence, promote the next cohort of Mahuki entrepreneurial application for residents, and connect New Zealand GLAM focused experts with Mk Haley’s for future collaborations.