What can we learn from past U.S. climate, youth, and human rights movements to inform our future? Three U.S. experts answered this question following the 2021 United Nations Climate Change Conference (COP 26). A conference bringing world leaders together to accelerate climate action and climate movements. Join us for an interactive discussion for ideas of how to move forward. 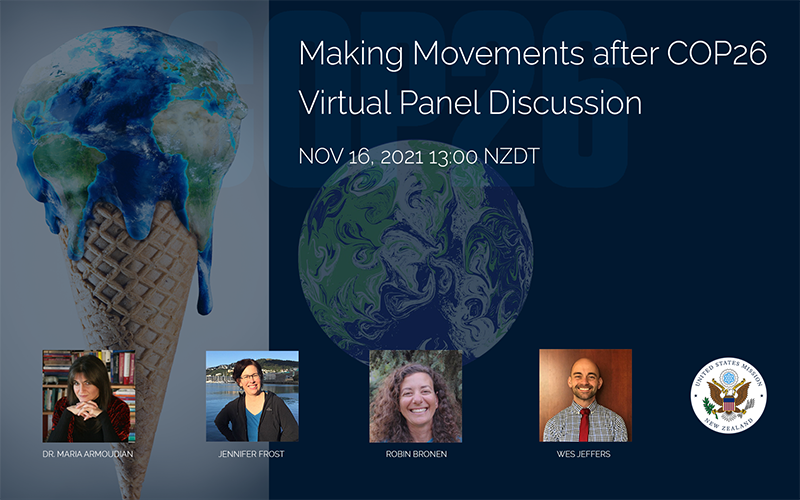 Dr. Maria Armoudian is a senior lecturer at the University of Auckland in New Zealand, the host and producer of the radio program, The Scholars’ Circle, and the author of three books: Lawyers Beyond Borders: Advancing International Human Rights through Local Laws and Courts; Kill the Messenger: The Media’s Role in the Fate of the World; and Reporting from the Danger Zone: Frontline Journalists, Their Jobs and an Increasingly Perilous Future.
She has published widely on human rights, environmental politics, communication, and good governance. Before coming to Auckland, she served as a commissioner in the city of Los Angeles for six years and worked in the California State Legislature for eight years, working on many issues ranging from environmental sustainability to good government and corporate reform. In addition to her academic publications, her articles have been published by the Washington Post, the Columbia Journalism Review, New York Times Syndicate, the Los Angeles Times Syndicate, The New Zealand Herald, the Los Angeles Daily News, the Progressive, Salon.com, Truthout, Alternet, Inc., Daily Variety and Billboard. Maria is also a song-writer & musician. Her CD is titled Life in the New World.

Robin Bronen is a human rights attorney, who works with communities forced to relocate because of climate change, and the co-founder of the Alaska Institute for Justice, an NGO that focuses on climate and social justice issues. Her research has been published by media outlets including CNN, The HuffPost, and The Guardian. Bronen is also a senior research scientist at the University of Alaska’s Fairbanks Institute of Arctic Biology. Bronen can speak about the displacement of indigenous and marginalized populations due to climate change. She has worked with islands in the South Pacific, including in Fiji and the Solomon Islands, focusing on climate-forced displacement.

Jennifer Frost is a historian of 20th century United States society, politics, and culture at the University of Auckland, New Zealand. She is the author of “An Interracial Movement of the Poor”: Community Organizing and the New Left in the 1960s (2001), Hedda Hopper’s Hollywood: Celebrity Gossip and American Conservatism (2011), and Producer of Controversy: Stanley Kramer, Hollywood Liberalism, and the Cold War (2017). Her co-edited collection of essays with Kathleen A. Feeley, When Private Talk Goes Public: Gossip in American History, appeared in 2014, and her co-authored teaching handbook with Steven Alan Carr, Teaching History with Message Movies, came out in 2018. Her focus now is on the campaign for youth voting rights in the United States, which culminated in the 26th Amendment to the Constitution in 1971. The book is titled “Let Us Vote!”: Youth Voting Rights and the 26th Amendment and is forthcoming from New York University Press. 2021 will mark the 50th anniversary of this enfranchisement of 18–20-year-olds, the last significant expansion of US voting rights and supported by a broad and bipartisan coalition.

James Wesley Jeffers (Wes) is the Deputy Public Affairs Officer in U.S. Embassy Wellington, New Zealand. He has been a U.S. diplomat for 11 years. He has served overseas in Pakistan, Canada, and the Republic of the Congo, and he has served in Washington DC in the Bureau of African Affairs and Bureau of European and Eurasian Affairs. Prior to joining the U.S. Foreign Service, Wes worked in Malawi with UNICEF.  Wesley is from Petersburg, West Virginia. He obtained a B.A. in Political Science and Sociology at Tulane University and an M.A. in International Affairs and Human Rights at Columbia University. He is a 2003 Horatio Alger National Scholar and served as a Fulbright English Teaching Assistant in Russia in 2007-2008. He speaks Russian, French, and is working on learning te reo Māori.