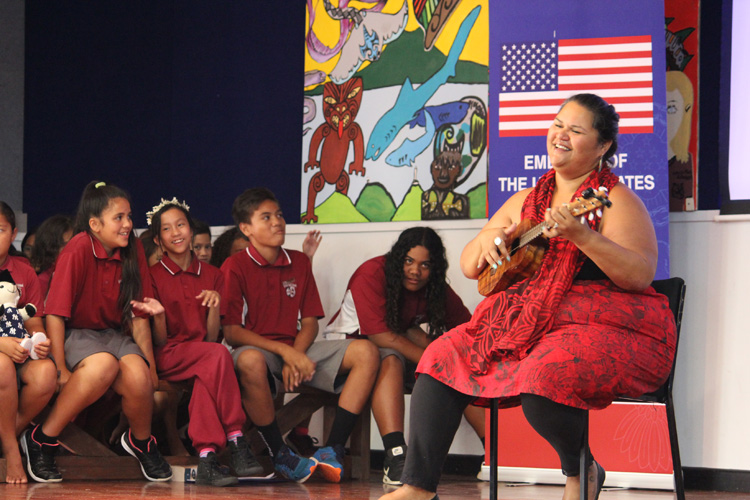 Mana moana (“the power of the ocean”) was especially strong this month, connecting Kanaka Maoli (native people from Hawaii) to their Maori and Pacific cousins in Aotearoa. The U.S. Embassy and Consulate are proud to support and be a part of the many Hawaiian exchanges that occurred in March.

On March 8, the U.S. Consulate staff attended the opening of the “Mana Moana” art exhibition. The art project developed through the synergetic collaboration between Star Gossage, a Maori artist from Pakiri, New Zealand, and Solomon Enos, a Hawaiian artist from Waianae, Hawaii. The “Mana Moana” art exhibition opened simultaneously in Auckland and Honolulu connected via Skype link and included performances by Ka Pa Nani ‘O Lilinoe and Halau O Moana Nui A Kiwa.

On March 10 in Auckland, the U.S. Consulate hosted Paula Fuga as our Arts Envoy. Paula toured schools throughout South Auckland to speak on her story of Pacific resiliency, run music workshops, and inspire youth through Hawaiian music performances.

On March 11 in Wellington, U.S. Ambassador Mark Gilbert and staff attended an emotional ceremony at Te Papa Museum for the return of treasures from Aotearoa to Hawaii. The beloved mahiole (feather helmet) and ‘ahu’ula (feather cloack) of Ali’i Kalani’opu’u (chief of Hawaii Island in 1779) were returned to representatives from Office of Hawaiian Affairs and Bernice Pauahi Bishop Museum. For photos of the ceremony see our FlickR page.

Throughout mid-March, the U.S. Consulate supported the Ultimate Waterman Challenge, the New Zealand based global surfing event to find the world’s best all-round waterman across multiple surfing disciplines including short board and long board surfing, stand up paddling and waka-ama. Since surfing was invented by Hawaiians and popularized around the world by legendary surf Ambassador Duke Kahanamoku, it was only fitting that many of the Ultimate Waterman contestants journeyed from Hawaii for this competition. And the winner for 2016 was … Zane Kekoa Schweitzer, a Native Hawaiian!

On March 15, 2016 the U.S. Consulate attended the Hawai’i Island Big Breakfast hosted by Hawai’i Tourism Oceania to promote travel from New Zealand to the island of Hawai’i, the Big Island. Special entertainment was provided by Island Breeze and Hawai’i Productions. The Hawai’i Visitors Bureau and County of Hawai’i graciously gifted two koa ‘umeke (special wooden bowls) with a woven cover—called po (night) and la (day)–to ATEED and the U.S. Consulate. Po and la complement one another and work together, much like ATEED and the U.S. Consulate work together for Pasifika festival and building relationships with Hawai’i.

From March 14-16, 2016, the U.S. Embassy supported the attendance of Hawaiian epistemologist extraordinaire, Dr. Manulani Aluli-Meyer, as a keynote speaker for the Pacific Arts Association International Symposium in Auckland. Dr Aluli-Meyer addressed key Hawaiian concepts such as the difference between nana (to look) and ike (to know, feel and understand), as well as the importance of mana moana in linking Polynesian cultures to each other and beyond.