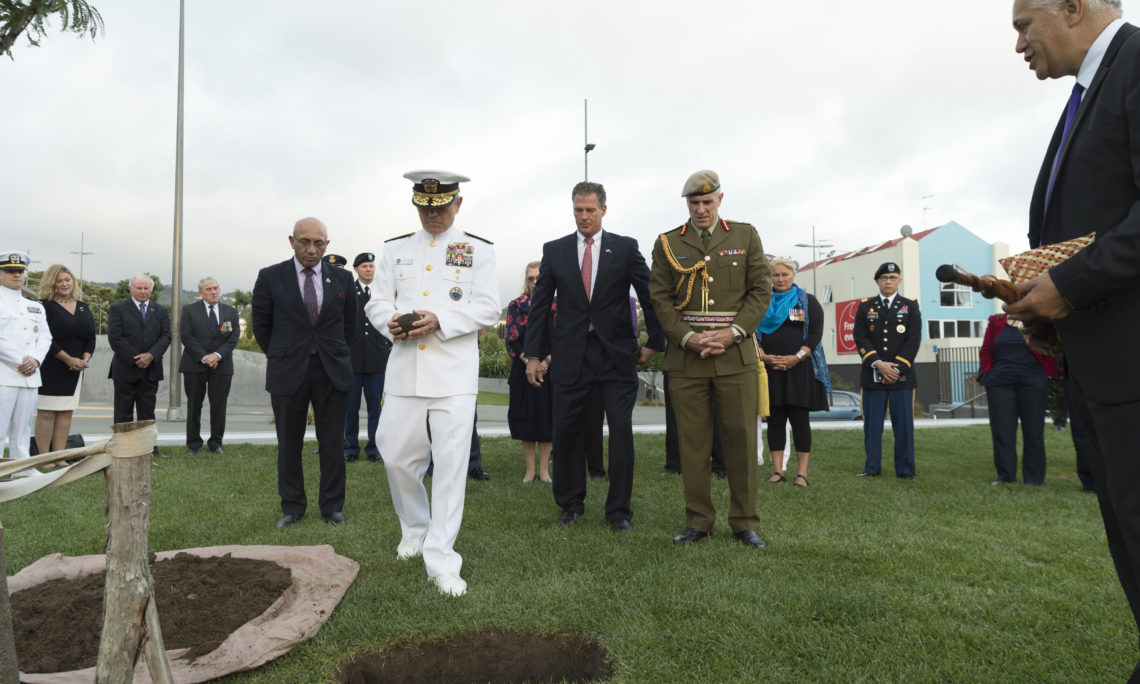 Admiral Harry Harris, along with Ambassador Scott Brown, New Zealand Minister of Defence, Hon. Ron Mark and Chief of the New Zealand Defence Force, Lt. Gen. Tim Keating participated in a mauri stones ceremony at the site of the United States Memorial, which will be installed at Pukeahu National War Memorial Park this year.

The short ceremony, which pays respect to Papa, the Maori earth mother, was led by Taranaki Whanui’s Peter Jackson who blessed the site and laid stones from the Taranaki region, preparing it for the construction of the monument. Admiral Harris brought stones from Pearl Harbor, Hawaii to lay in the earth and spoke about the enduring partnership between New Zealand and the United States. He cited conflicts where the two nations have fought alongside each other; scientific research in Antarctica; and disaster and emergency assistance including the participation of the USS Sampson in relief efforts in the wake of the Kaikoura earthquake in November, 2016.

Following the ceremony the designs for the memorial were unveiled inside the National War Memorial’s Hall of Memories. Ambassador Brown spoke about WWII when 150,000 American servicemen and women came to New Zealand to prepare for battles in the Pacific and to recuperate afterwards. He described this period as the bedrock of the bilateral relationship and spoke of the warmth of Kiwis towards the young Americans during that time and its enduring legacy.

The memorial is designed by Venezuelan-American architect Monica Ponce de Leon and forms a granite tablet, elevated to reveal a dappled surface and bearing the quote taken from a radio address by U.S. Secretary of the Navy Frank Knox on Anzac Day, 1943:

‘Together, in our strength, we shall keep that ocean – Pacific!…as we are comrades in battle, so we shall be partners in victory. I salute the lands of the Anzacs as our companions in the peace that will follow, comrades and partners as an example to all the world of what can be accomplished by a fraternity of free men.’

The memorial is currently being carved in Madison, Wisconsin and is expected to be unveiled in a winter ceremony in New Zealand.