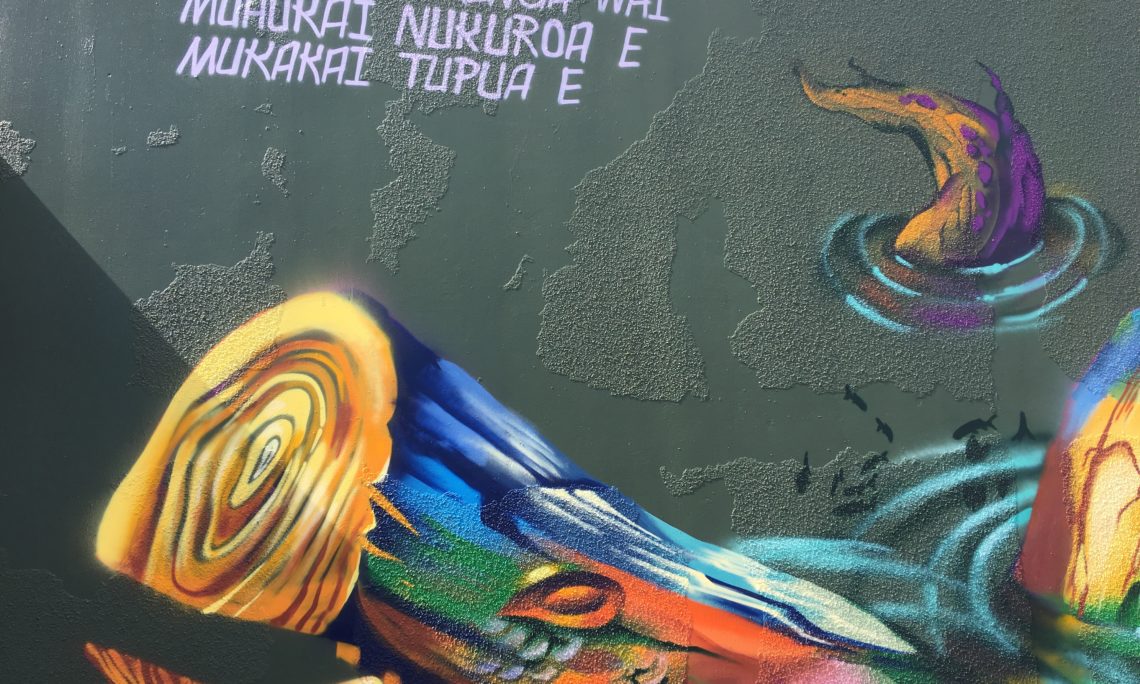 Estria and John worked with local young people to learn more about Maori culture and history, and combined this knowledge with Hawaiian stories to create striking pieces of public art, which will be a lasting reminder of Mele Murals’ participation in the 2017 festival. Photo credit: U.S. Department

The fourth annual Māoriland Film Festival took place in Ōtaki, a small town north of Wellington, earlier this month.  Māoriland is New Zealand’s only indigenous film festival and brings together native films and filmmakers from around the world for a celebration of culture and storytelling through film. The festival, whose artistic director is Wahine Toa alumna Libby Hakaraia, focuses on the vibrancy and diversity of indigenous film and runs for five days.

This year’s program included 121 events with eight New Zealand premieres of award winning international films, 100 films from 15 countries and 71 indigenous nations. In addition to the short and feature film screenings, for the first time this year the festival held a Rangatahi (youth) sub-festival. Curated by five young Ōtaki women, the program featured films chosen because of their appeal to young people. Schools were invited to participate in the festival and cultural and film workshops and discussions were held alongside the film screenings, and teaching support materials prepared for school teachers. The Rangatahi Festival opened with a gala event at which the keynote speaker was Julian Dennison, the fourteen year old Māori star of several films including the hit ‘Hunt for the Wilderpeople’ (2016). Dennison was also named the first patron of the Māoriland Film Festival at this year’s event.

Alongside films from New Zealand, Australia, Canada, the Pacific and Europe, Māoriland is committed to showcasing Native American films each year and the Embassy was proud to support the organizers to bring the Executive Producer and stars of the documentary ‘Mele Murals’ to this year’s festival. ‘Mele Murals’ is a documentary about the transformative power of modern graffiti art and ancient Native Hawaiian culture. Set against the resurgence of Hawaiian language and culture of the past twenty years.  Artists Estria Miyashiro and John Hina talk about how street art  has taken them on personal journeys to discover their history, identity and responsibilities as Hawaiians. Both attended the festival along with producer Keoni Lee, who spoke at the pōwhiri (Māori welcoming ceremony) in the Hawaiian language and was supported by Estria and John with a traditional Hawaiian song. Keoni also introduced the film at the weekend screening and participated in a question and answer session with the audience, along with Estria.  Audience members praised the inspirational tone of the film, and were moved by the artist’s journey to reconnect with his Pacific heritage.  Embassy Public Affairs Officer Rob Tate welcomed them at the film screening where Embassy support was gratefully acknowledged.

While they were in Ōtaki, Estria and John also painted three murals in the town, with an assist from Rob Tate. They worked with local young people to learn more about Maori culture and history, and combined this knowledge with Hawaiian stories to create striking pieces of public art, which will be a lasting reminder of Mele Murals’ participation in the 2017 festival and the enduring connections between indigenous New Zealand and American cultures.