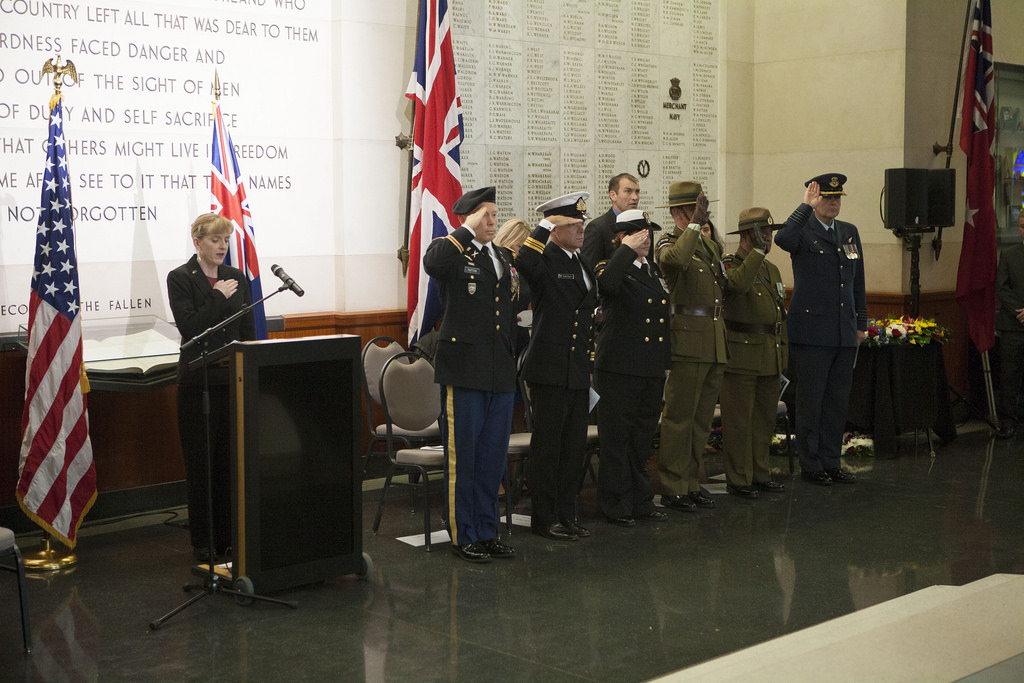 Auckland:
Memorial Day, which is observed on the last Monday of May, commemorates the men and women who died while in the military service. In observance of the holiday, many people visit cemeteries and memorials, and volunteers often place American flags on each grave site at national cemeteries.

Sunday, 28 May 2017 marked the 69th annual U.S. Memorial Day Service at the Auckland War Memorial Museum.  Owing to New Zealand’s unique place in the world, it is one of the first services worldwide, and serves as an opportunity recognize those who have served the United States in all manner of conflict or service around the globe.

In remarks, Consul General Higgins and Colonel Patton acknowledged the service of those who have fallen in the service of their country, and the long-term and on-going support demonstrated by the New Zealand Defense Force, and the everyday Kiwis who attend.  He noted, “the presence here today of Kiwis, old and young, honors not just the Americans who have died in war; it honors, too, the combined sacrifice made by New Zealand and the United States during the many times we have stood and fought together in conflict.”

The service concluded with wreaths laid by the many organizations, veterans and families of veterans in attendance – and the traditional flag folding ceremony.

The service was an opportunity to reflect on the days when U.S. Marines out-numbered locals in parts of Kapiti when they arrived as part of a “friendly invasion” of U.S. Armed forces during World War II.

Lt. Brown, Staff Sergeant Halterman and members of the United States Marine Corps had key roles during the service, and Chargé d’Affaires Candy Green delivered a meaningful speech acknowledging the American Armed Forces, “who came to defend our friends in New Zealand and work with Kiwis to turn the tide of tyranny across the Pacific”. Chargé d’Affaires Candy Green emphasized the relationship between the United States and New Zealand as being “united by our past, by our losses, by our interests, our values” and thanked those who continue to honor their service and sacrifice by telling their story.

Following the service was the official opening of the restored Marine Hut; a project awarded a grant by the U.S. Embassy and was undertaken by local volunteers at Menzshed Kapiti. Public Affairs Officer, Rob Tate, delivered an insightful speech to tell the story of U.S. Armed Forces and how the restored hut will be “a symbol of enduring friendship between the people of the United States and the people of New Zealand”.

Wellington:
The following day, the U.S. Embassy along with the NZ American Association, hosted a Memorial Day Service at the beautiful wooden cathedral, Old Saint Paul’s in Wellington.

The service commenced at 12pm and was attended by NZDF personnel, local government officials, school groups, SCOUTS NZ, embassy staff and locals. The service began with a presentation of the colors by the U.S. Marine Guard Detachment and was followed by National Anthems, readings, hymns, prayers and the laying of wreaths. Attendance was overwhelming and illustrated just how deep the bond between the United States and New Zealand is, 75 years after U.S. Armed forces arrived in New Zealand.

The service concluded with guests sharing stories over cups of tea and fruit cake, while reflecting on the historic relationship between the United States and New Zealand.