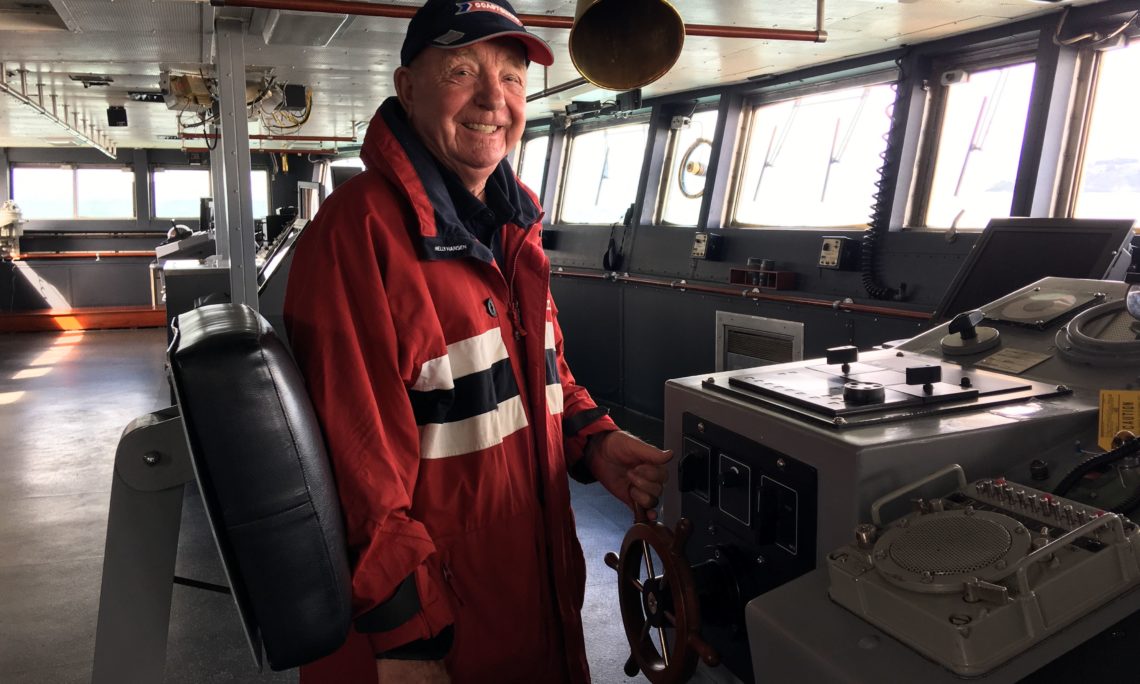 Pete Woodward on board the Polar Star in Wellington. Photo credit: U.S. Department of State.

A veteran of the Merchant Navy, Pete, who is almost 80 years old, is now a volunteer with the New Zealand Coastguard on the Kapiti Coast. He and his fellow volunteers are the brave Kiwis who will go to any lengths to bring home safely those who get in trouble at sea.

In his spare time he makes models of ships. Pete has always wanted to make a model ice breaker and by coincidence, has spent the last eleven months working on a model of the one and only Polar Star.

He has been working from scratch, no plans, just five online photos. The model, measures approximately 1.2 meters by 0.25 of a meter and is made entirely of marine ply/balsa and laminated timbers.

So when Pete heard the Polar Star was coming to Wellington, he started ringing everyone he thought might be able to get him anywhere near the ship— mostly so he could get a clearer idea of what the ship’s funnels looked like!

He called the Port, the City Council, his contacts in the Police Maritime Unit… and we’re awfully glad we were on Pete’s list. It was immediately clear that there was no one who wanted to see that ship more than Pete.

Yesterday afternoon, on a liberty day (when the crew gets rare and precious time off), some of the ship’s company stayed back aboard and gave Pete a tour. The vessel was thoroughly explored, photos were taken, caps were swapped, and Pete proudly shared pictures of his model with those who know the ship inside and out.

To our Polar Star tour guides: thank you.

And dear Pete- thank you so much for getting in touch. Your enthusiasm is contagious. Good luck with your continued model-making and thanks for the life-saving work you and your colleagues do on the Kapiti Coast and around New Zealand.