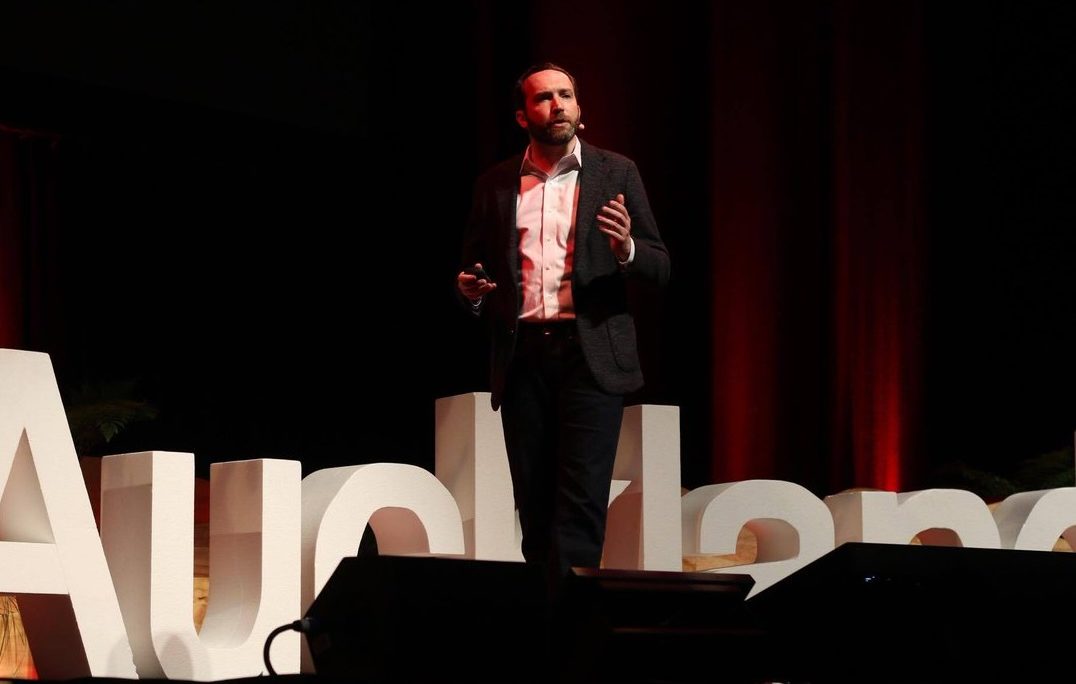 Dr. Alex MacDonald is NASA’s Senior Economic Advisor within the Office of the Administrator at NASA Headquarters and is one of the foremost experts on the economic history of American space exploration and contemporary private-sector space activities.

During a one-week trip to New Zealand, Dr. MacDonald connected with a wide array of government, academic, and private-sector representatives to discuss the opportunities and challenges for New Zealand in regards to its emerging space industry – as well as making time for a TEDxAuckland talk!

Launching his program in Wellington, Dr. MacDonald conducted a series of roundtables with key stakeholders, meeting representatives from the Ministry of Business, Innovation and Employment, the New Zealand Space Agency and other government agencies involved with taking Kiwis to the stars. In Auckland, Dr. MacDonald held similar talks with academia, local and national government officials and members of the private sector who make up New Zealand’s growing space community.

Throughout these talks, Dr. MacDonald discussed the commercial space sector, where NASA sees its relationship with private organizations, New Zealand’s unique points of difference when it comes to the space race (such as our unique geographical location and proximity to Antarctica), collaborative models used in the U.S. by universities and private institutions in regards to space missions – and opportunities for collaboration and partnership with NASA. As New Zealand’s space industry is relatively new, Dr. MacDonald was able to elaborate on how NASA works alongside the private sector, universities and private research groups.

Blasting out of the boardroom, Dr. MacDonald then took to the stage at TEDxAuckland for a space-sector talk. As a TED Fellow, he was no stranger to TED events, and delivered a unique but fascinating perspective on how science fiction stories shape our view of space exploration – and how that in turn shapes the direction technology develops.

From the dawn of humankind, man has always looked up to the stars in wonder.
Only recently have we been able to travel beyond our atmosphere and land on one of those lights in the night sky, the moon. Technology got us there, but curiosity and imagination laid the path to the moon hundreds of years before our arrival.

NASA Senior Economist Dr. Alexander MacDonald’s speech at 2017’s TEDxAuckland was on the visionaries who led our species to the moon. He spoke about how the fiction writing of a few captivated the minds of many – and thus motivated them to investigate the possibility of landing on the moon. What was mainly fiction writing soon became a sort of pseudo-fiction, a hybrid between what was known and unknown in the realm of space travel, providing readers a template, to fill in the gaps required to make a mission to the moon possible.

Centuries after the first writings about a journey to the moon, we had the Apollo 11, the first successful manned moon landing, by July 1969 we had filled in the templates laid by fiction.
The most important message I took out of Alex’s inspiring speech was to dream, relish in imagination and question the bounds of what we know. We’re encouraged from our youth to make decisions based on facts and evidence, often preventing us from looking beyond what is plausible. Instead of restricting ourselves, we should be looking towards what is impossible in the hope to remind that one day it may be within our reach. We should be envisaging utopian societies as a way to lay the foundation for future generations.

New Zealand is the perfect place for the creation of the future, with a diverse population and an innovative culture to boot; we all have the opportunity to shape the future, as fact or fiction. Whether we look to the depths of ocean surrounding us or the magma flowing below our feet, the potential will never be investigated without someone imagining the seemingly impossible.

Wrapping up his time in New Zealand, Dr. MacDonald was able to stop by two figureheads of Aotearoa’s space sector – RocketLab and NZ’s largest radio and satellite observatory, managed by the Auckland University of Technology and situated in Warkworth.

With RocketLab aiming to have their two-stage election rocket launching regularly in the near future, and AUT’s Radio Astronomical Observatory playing a constant role in monitoring a range of organizations’ space activity and conducting other research, these two organizations are just some of the many players in NZ’s exciting and emerging space sector.

As U.S. Consul General Melanie Higgins notes, “The space industry in New Zealand looks set to flourish in the coming years, and the United States is thrilled to see this happen – and support it as much as possible. Science is a cornerstone of the relationship between our two countries, and NASA plays a large part. That is why we were excited to have Alex visit, and continue to develop relationships, partnerships and collaboration between the U.S. and Aotearoa, and see if we can get Kiwis to fly!”