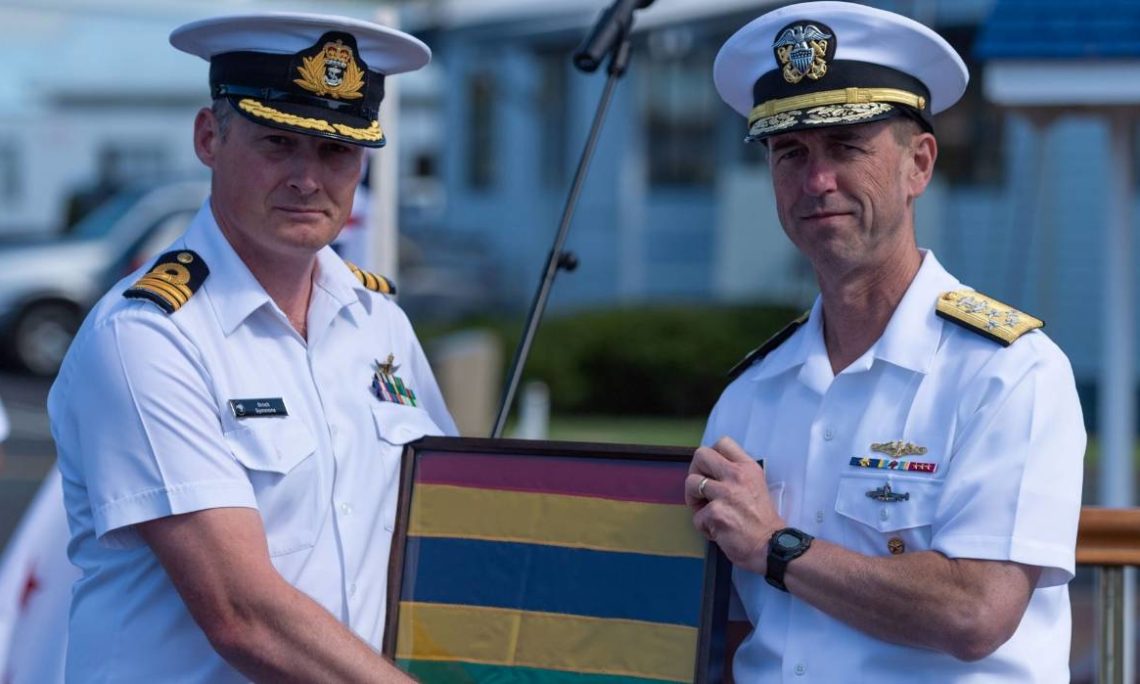 A New Zealand Defence Force frigate is being celebrated with a rare award presented by the United States Navy for their support.

On Friday, a US Meritorious Unit Citation was presented to the New Zealand Defence Force’s Anzac frigate, HMNZS Te Kaha, at the Devonport Naval Base.

The United States chief of naval operations Admiral John Richardson presented the crew of HMNZS Te Kaha with the special unit commendation which is rarely given to non-US ships.

The award was to recognise the support provided by the HMNZS Te Kaha to the US Navy for nine days in June and July last year.

Chief of Navy New Zealand Rear Admiral John Martin said after the 2016 Kaikoura earthquake, the US was one of several nations which helped in he aftermath of the disaster.

New Zealand and the US had maintained a strong and trusting relationship since World War II, he said.

“The benefit of being able to have the close relationship allows us to utilise some of their experience … [and] reflects the extremely close security ties we have with the United States working in the Pacific and in the region to achieve maritime security.”

Last year, when the US Navy suffered two collisions, both with a loss of life, the NZ Navy offered the HMNZS Te Kaha and its 176 crew members to stand in for the two ships.

“I think it was the gesture that was most valued,” Martin said.

The crew, with an average age of 23, were something he believed the whole of New Zealand should be proud of.

“We make sure our ships, like our aircraft and soldiers, can work at the drop of a hat.”

The crew were trained in “some of the worst, most challenging waters in the world”, Martin said.

Richardson said the crew demonstrated the “highest standards of seamanship and readiness when directed to extend her deployment to support the US Navy’s Seventh Fleet after a collision between the guided-missile destroyer USS Fitzgerald and a Philippines container ship off the coast of Japan” last year.

“This award is very rare and is kept for very special occasions,” he said. “Te Kaha’s contribution was vital to maintain freedom of trade which leads to prosperity for our countries.

“By their truly distinctive accomplishments, perseverance, and devotion to duty, the officers and enlisted personnel of HMNZS Te Kaha reflected credit upon themselves and upheld the highest traditions of the naval service,” Richardson said.

On Friday, he presented a pennant marking the commendation to the present Commanding Officer of HMNZS Te Kaha, Commander Brock Symmons.

CDR Stephen Lenik was the Commanding Officer at the time.