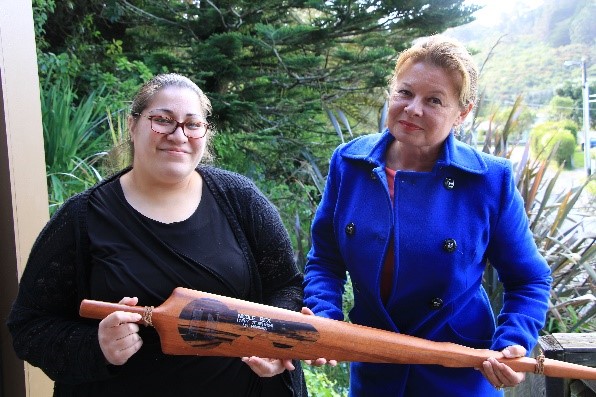 Nicole Rex and Mrs Brown with a Niue Sika(Spear)

If there’s one person you can count on to throw a party and pull together a crowd, it’s Nicole Rex. She has been involved in numerous Pacific and community events across Auckland and Wellington, including the Polynesian and Pasifika Festivals. Born in New Zealand, her large extended family is Niuean. Her grandfather, Sir Robert Rex, was First Premier of Niue from 1974 – 1992. Nicole works hard to keep her family’s legacy alive and to teach her island traditions to the next generation.

“I feel like it’s my duty as a Niuean to educate others about our small Pacific Island. Some of the students in my children’s school didn’t know where Niue was or anything about our culture,” she explains, telling me that her two children are the only Niuean students at their school.
One of the most significant Niue traditions is the haircutting ceremony — a ceremony celebrated for the first-born sons. Nicole’s son Arty is half Niuean and half Samoan (Falealupo, Savaii) so it was important for her to carry on the special tradition known as the ‘Hifiulu’ a rite of passage for young boys. During the Hifiulu, envelopes filled with money and gifts are given to the boy in return for a piece of his hair. Arty celebrated his Hifiulu on his 6th birthday.

Nicole showed a video of her son’s rite of passage, Hifiulu, to his classmates and they were fascinated. She says that’s when she realized she could help teach school children about her island’s culture.
In 2016 she founded the Pasifika Parents Network at her children’s school. The goal is to encourage teachers and parents to recognize and embrace cultural diversity in the classrooms.
Nicole was also a founding member of the Tupumaiaga Trust, an initiative that helps Niuean youth reconnect to their culture through practical workshops run during the school holidays.
“When I was young I yearned for that cultural knowledge and there was nothing around at the time so a bunch of us started our own group, and even though I’m not actively part of it right now, I am so proud of the wonderful work they are doing,” Nicole says.

When she is not promoting cultural awareness, Nicole uses her experience in the broadcast media industry for the work she is most passionate about, which is empowering and working with young Pacific women. She has been a mentor and coach to many young aspiring Pacific broadcasters and still continues this passion through her work at NZ On Air as a Funding Advisor for Community Broadcast.

As an advocate, Nicole also works with the New Zealand government to initiate policies that enhance Pacific communities. Nicole was one of the elected Niue representatives for both the Manukau City Council from 2013-2016 and most recently the Wellington City Council on their Pacific Advisory Committees. She also served as the policy forum planner for the Pacific Leadership Forum.

A communications professional, 35-year-old Nicole has an extensive career background in media. For nearly a decade she worked for the Pacific Media Network as a broadcaster, producer, and executive. Prior to that, she worked as a broadcaster for Mai FM 88.6 and as a freelance writer for Taiohi Magazine.

Nicole plans to continue helping her Pacific people in many different ways through the media, government, and school system. She knows her family’s tiny island is easily swallowed by the huge Pacific Ocean, but she doesn’t want it forgotten.

“I want my children to have a connection to their land,” she says.