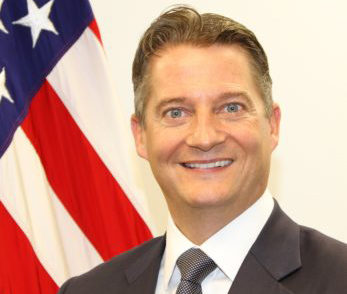 Kevin Covert, a career member of the Senior Foreign Service, is Chargé d’affaires for Mission New Zealand.  Before arriving in Wellington in August 2019, he served as Chargé in Dushanbe, Tajikistan, Deputy Economic Counselor at the U.S. Embassy in Seoul, and Director for Russia on the National Security Council Staff.  Kevin was also Human Rights Officer in Moscow, Energy Officer in Astana, and Director of the Office of Strategic and Performance Planning in Washington.  Prior to joining the Department of State in 2005, Kevin managed U.S. foreign assistance projects for more than a decade to help countries of the former Soviet Union transition to a market economy and open society.

Kevin is a proud alumnus of Georgetown University, Pembroke College (Oxford), and Cornell University.  He is studying te reo Māori and speaks fluent Russian, Ukrainian, and French.  Kevin is married to Lesya and they are blessed with two adventurous boys.  In his spare time, he enjoys exploring Aotearoa and coaching the Wellington City Pirates youth baseball team.

To send an invitation to Kevin Covert, please email: ProtocolWellington@state.gov

A list of former U.S. Ambassadors to New Zealand and Samoa.