The Pasifika Medical Association (PMA) Auckland office hosted representatives from the US Embassy and British Consulate last Friday as they presented an online symposium exploring U.S. partnerships with New Zealand and other Pacific nations on health security and climate change.

More than 150 people registered from around the world to hear speakers that included PMA Chair Dr Kiki Maoate (ONZM, FRACS) and an opening address by Dr Michael Osterholm, Director of the Centre for Infectious Diseases and Policy at Minnesota University.

The online event was convened by Allison Waters a Foreign Service Officer from the US Embassy, who says the symposium was a key opportunity for world leaders in the field of health security and climate change to come together and discuss the challenges Pacific countries are facing.

“Pacific health security is something that is of particular importance right now, because climate change is a reality for many of our Pacific nations. We want to work with our partners here in New Zealand, the Pacific and all across the world.

This is an opportunity for people to network from all around the world, and for people to hear from experts who are truly on the ground who know their research and who are sharing their experiences.” 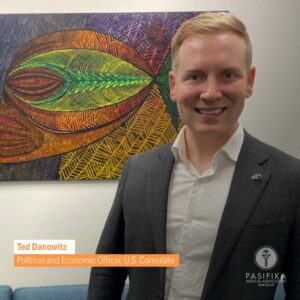 The two-hour U.S Department of State led symposium, also showcased the U.S. Science Envoy Programme, which connects Pacific partners with eminent U.S. scientists and engineers to leverage their expertise and networks to identify opportunities for sustained international cooperation. Since the programme’s inception, 23 prominent scientists and engineers, including Nobel Laureates, have served as U.S Science Envoys and have travelled to more than 50 countries.

Ted Danowitz, a Political and Economic Officer at the US Consulate, says the event aims to spark conversations around important topics that will lead to action.

“When you look at the effects of climate change in the Pacific, issues include rising sea levels, more frequent and stronger weather patterns which leads to storms and the spread of disease. It’s important for us to have these discussions and think and talk about possible solutions.”

The symposium is the first in a series of monthly events to launch the U.S. Science Envoy Program digital campaign.