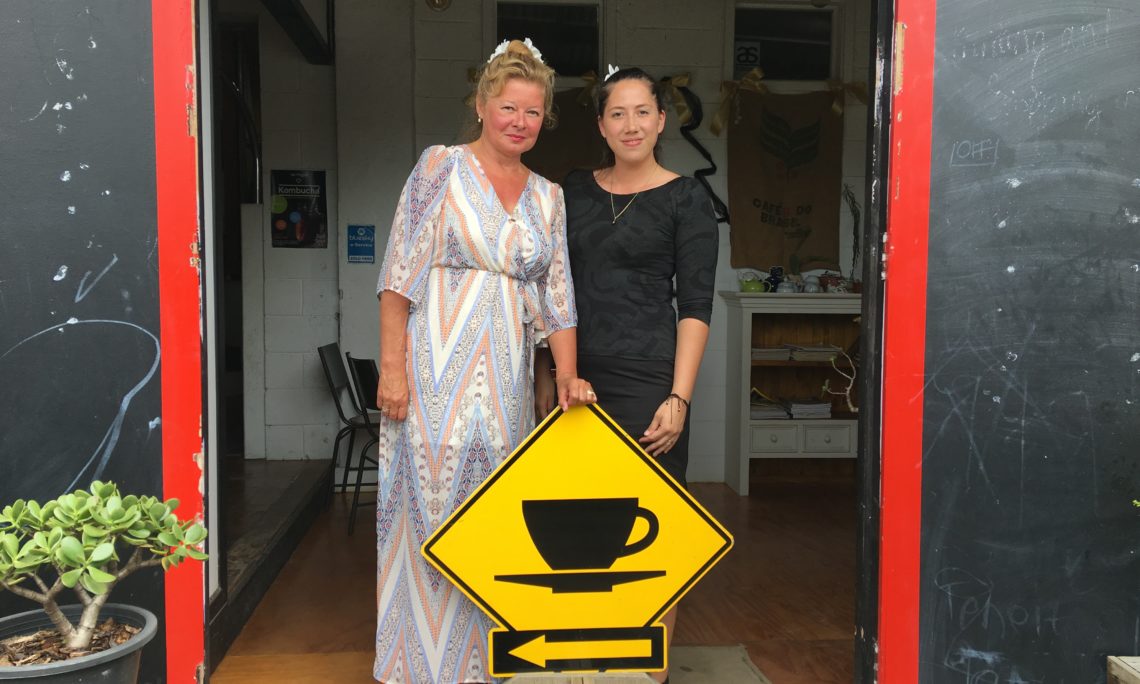 For the next blog in the Pacific Women Leaders series, I met with Ana File-Heather, owner of Red Door Coffee Bar and Unique Island Streetwear.

Ana File-Heather is desperately trying to hire a new barista.  She owns the Red Door Coffee Bar in Rarotonga, Cook Islands, but, ironically, coffee isn’t the main thing she wants to sell.  This creative businesswoman is using coffee to lure tourists and locals alike into her shop where she then leads them to the back room for the real sell: Unique Island Streetwear, which consists of hip T-shirts and clothing designed by Ana and her team.

“I always wanted to have my own business,” Ana told me during a visit to her shop where she offered me a delicious cup of coffee.

It’s a business she started in her home, but then quickly outgrew the space. The idea was inspired by a trip to Florida, USA on her 30th birthday.  While visiting the beach, she saw a quick and inexpensive way to custom print t-shirts.

“I was fascinated with the fact that you could get on-the-spot printing, and I knew there was nothing like that in the Cook Islands” said Ana.

So, Ana returned to Rarotonga and purchased her first screen printer.  Then she got busy designing cool shirts and athletic jerseys.  Now she’s developing a brand called “South” (named after the South Pacific) that she’s hoping to market internationally.

Ana’s already gotten the contract for Team Cook Islands, designing the distinctive green shirts for the athletes who will compete in the Commonwealth Games, Pacific Games, and Olympic Games.

“A girl told me the company that was supposed to do the Olympics clothing had pulled out.  We can’t have Team Cook Islands without a uniform,” Ana said.

The shirts have the motif, Tikitikitangata, (the people) which is a symbol of unity and strength. “New life” as depicted by the coconut tree and the shark tooth pattern is symbolic of strength.

“It’s a four-year contract for the summer Olympics that started last year and it’s good exposure,” she says.

Ana also was awarded the contract for the Cook Islands Ministry of Tourism’s vacation campaign:  “Cook Islands.  Love a little Paradise”.  She’s printing hundreds of the bright t-shirts that are being worn all over the world.

Another significant sector of Ana’s business: family reunions in the Cooks Islands.  As family members return to the Cook Islands from near and far, matching shirts and outfits have become all the rage.  And Ana’s shop has earned the reputation as being a great place to get customized family shirts.

On November 10, 2017, Ana received the “Emerging Entrepreneur Award” from the Business Professional Women’s Association.   As a reward, The Cook Islands Chamber of Commerce and the Bank of South Pacific have gifted her with a one-year finance mentorship program.

“It’s the one area that I need help with,” she says.

If you rewind a dozen years, it’s difficult to imagine this self-confident businesswoman being kicked out of high school.  She tells me how she got pregnant at the age of 16 and dropped out of school temporarily to have the baby.  But when she tried to return to school, she was told by the administration that she couldn’t take classes.

“They told me to go home and take care of my baby,” Ana explains.

That didn’t stop her.  Ana studied independently and got a high school diploma and then went onto the University of the South Pacific, participating in their on-line program for a diploma in 2000.

As a young mother, she was invited to attend a conference on HIV prevention.  Ana was so passionate about what she learned that she decided to volunteer for a youth group that visited schools to talk with teens about AIDS, HIV infection, and sexually transmitted diseases.

She continued to spread the message of HIV and STD prevention while working for the Cook Islands Ministry of Health and the Cook Islands Red Cross, where she worked in the field for nine years.

Ana also became a Doping Control Officer with the Oceania Regional Anti-doping Organization.  She joined a team of professionals who tests athletes for signs of doping.  Athletes from rugby, net ball, canoeing, and athletics are all routinely tested.

“We’re trying to encourage clean sports around the world and so far we’ve never had a positive locally tested [doping case] in Cook Islands” Ana tells me.

Ana is now married and her husband’s family has a well-known island retail business called “Vonnias” which, along with three boys, keeps them busy.   She confesses there are still challenges for women who want to open their own businesses on the Cook Islands.

“Some customers want to go to my husband instead of me.  We women need to feel empowered to show them.  I am the boss, not my husband,” Ana insists as she scoops up our coffee cups and leads a customer into her newly expanded and decorated back room.