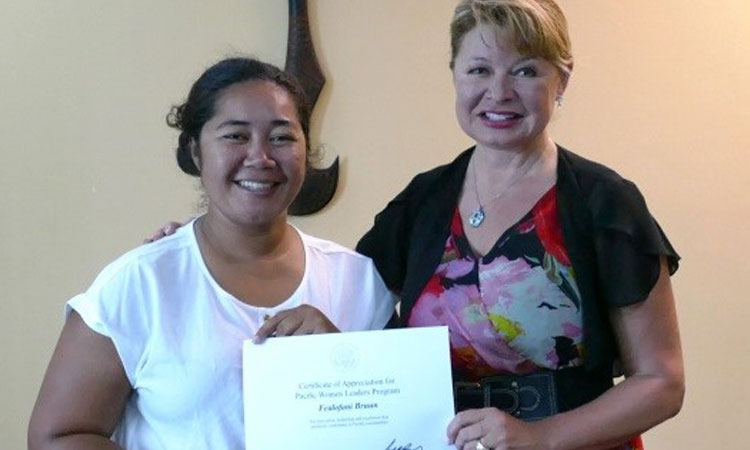 Welcome to the first in a series of stories highlighting Pacific women for their contributions to humanity and the communities they serve.  Earlier, I traveled to Samoa with my husband, U.S. Ambassador Scott Brown, to present his credentials to the new Head of State, His Highness Tuimalealiifano Vaaletoa Sualauvi II.  After having the pleasure of meeting His Highness, I met with some of Samoa’s most intriguing women. I am happy to introduce the first woman in the Pacific Women Leaders series, Fealofani (Fani) Bruun, Samoa’s very first Yacht-master Captain knocking down barriers while building confidence in other women within her community.

She glides through the water like a dolphin; an effortless dance combining wind and sails. The fierce woman who captains this vessel commands a fleet of muscular men who know better than to argue with her, or, with Mother Nature. “She” is the Gaualofa, a 22 meter va’a (voyaging canoe).  And her captain, Fani – is the first woman to captain this traditional voyaging vessel. Sixteen crew members handled the massive sails, and at the same time enlightened my husband and I on how to sail this great va’a in Apia’s marina.

Fani is sailing without modern instruments or equipment.  This is how her ancestors, who settled these Pacific islands hundreds of years ago, sailed the waters like a Pacific highway.  They used the stars to navigate and the forces of nature to carry them from island to island. These vessels play a large part in Polynesian culture and history throughout the region, most recently featured in Disney’s Moana movie.

Growing up in a family of fishermen in Samoa and American Samoa, she has been sailing since five years old, and says, “I love the sea, just as my family and ancestors did.” She first ventured into traditional navigation after being captivated by the first va’a she saw, Teau-o-Tonga in 2010. “I was immediately eager to learn how it moved. I haven’t looked back ever since and my goal is to keep alive traditional navigation techniques,” Fani says while smiling.

She does this as an active member of the Samoa Voyaging Society which was created in 2009 to re-establish traditional voyaging as part of Samoan cultural and national heritage. The Society encourages conservation, protection, and awareness of the Pacific Ocean, as it seeks to teach new generations. “In our voyaging society, our ambition is to share these unique skills with every generation. It is the right of all Polynesians,” she says. They actively recruit new members of all ages in villages and schools; and conduct workshops with youth and foreign visitors eager to learn this specialised trade.

Last year Fani made history as the first Yacht-master Captain as a woman, and person, in Samoa, made possible by a grant from the US Embassy Samoa. This has made a large positive impact in Samoa where Gaualofa no longer needs a non-Samoan captain. It has also seen an increase of interest from women and girls in what is still seen as a predominantly male sport.

Fani knows what it’s like to take on responsibility.  Every time she sets sail, she’s reminded of her immense responsibility as captain of the vessel. “It’s people’s lives.  They’re placed in your hands,” she explains. “When you’re on the Gaualofa, you are everybody’s sister, mother, father, minister, pastor, and their doctor.  You’re everything, so you have to share all of this and you have to have a heart.”

Fani says she doesn’t miss using instruments.  She’s learned to trust nature, and herself. “You have to have faith in your teachers and how your ancestors got here,” she tells me about her willingness to give up modern technology to practice this ancient art of navigation.

Do the men in the 16-person crew always listen, I wonder? “They have to,” she laughs. “The women in my village have a saying.  The men are in front but the women are behind making sure everything is smooth and running on schedule.  The women make sure the family is in harmony,” she says.

When I tell her she reminds me of Moana from the Disney movie, she tells me her friends have told her the same.  But, unlike the animated movie’s island girl, Fani isn’t trying to prove she’s independent.  What she’s trying to do is to keep her ancestors’ traditions alive. “It’s all about making sure our tradition carries on,” says this brave young woman, who deserves her title of Captain Bruun.