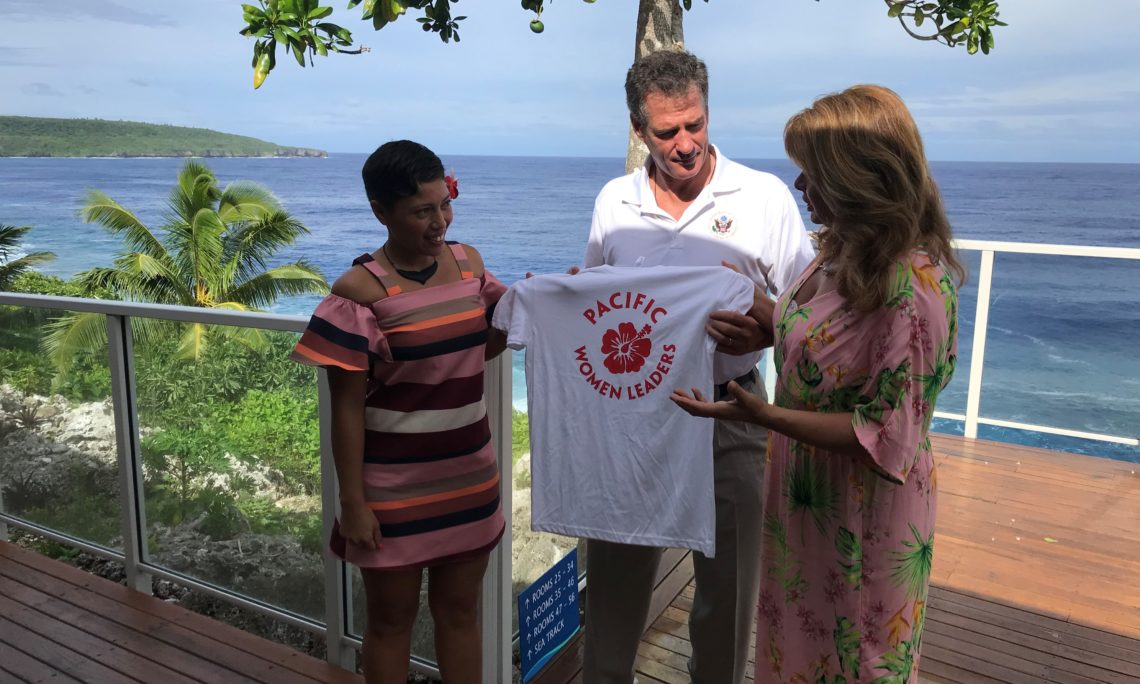 For the next blog in the Pacific Women Leaders series, I met with Fiafia Rex – founder of Oma Tafua (To Treasure Whales).

Endangered whales have a special friend on the tiny island of Niue, deep in the Pacific Ocean. Her name is Fiafia Rex and she founded Oma Tafua, The Whale Conservation in Niue more than 10 years ago. In what has become one of the oldest conservation projects on the island, she’s helping to educate people about ocean and marine conservation. Their island, a coral atoll, boasts unsurpassed water clarity and Fiafia’s goal is to make sure that the ever-changing ocean remains a clean and safe Pacific highway for whales.

In boats, she and her volunteers travel the “Rock of Polynesia” (Niue) waters to identify different visiting whales.  They track the animals’ activities to learn about their habits.  In particular, the visiting Oceanic humpback whale is endangered and needs special protection.  Fiafia says the good news is that islanders have seen an increase in the number of mother whales with calves traveling through Niue.

Oma Tafua means “to treasure whales” in Niuean.  The 100-square-mile island is only inhabited by about 1,600 year-round residents.  But with tourists, those numbers swell from July through October when the whales enter Niue’s water while migrating north from Antarctica into warmer waters to mate and give birth. Visitors come by the thousands to watch them migrate.

While passing through, it’s important for boat operators to understand the whale’s habits and their need to keep a distance so they can properly protect the mother whale and her baby calf.  It can be very stressful for the whales to encounter boats and all vessels must remain at least 50 metres from an adult whale and 100 metres from a pod where a calf is present. Fiafia says it’s especially important for her organization to train new boat operators on how to safely interact with whales.

“We rely heavily on whales for tourism and this is a shared resource so we need regulations,” Fiafia says.

She says the whales feed in the freezing Antarctic waters and don’t eat much during their 5,000 km trip.

She helped advocate for the whale watching regulations in Niue.  According to her, there are five to six-thousand whales in the region and several hundred whales that come to visit Niue.

“The moms and calves come so close to shore you can see the mother nursing her calf from this hotel,” she says as we stand on the balcony of the Scenic Matavai Hotel in Niue.

In August, the annual Whale and Coral Reef Festival will take place in Niue.  This is an opportunity for the communities to join in music and arts to celebrate the Pacific Ocean and her many gifts.  It’s also an opportunity to educate the next generation of islanders who will be interacting with these beautiful creatures.

“We are teaching kids to swim.  We know that research and education are vital to reach lots of people,” Fiafia tells me, describing the need for more local families to get involved in marine conservation so, they too, can help protect their island’s most valuable resource – whales.