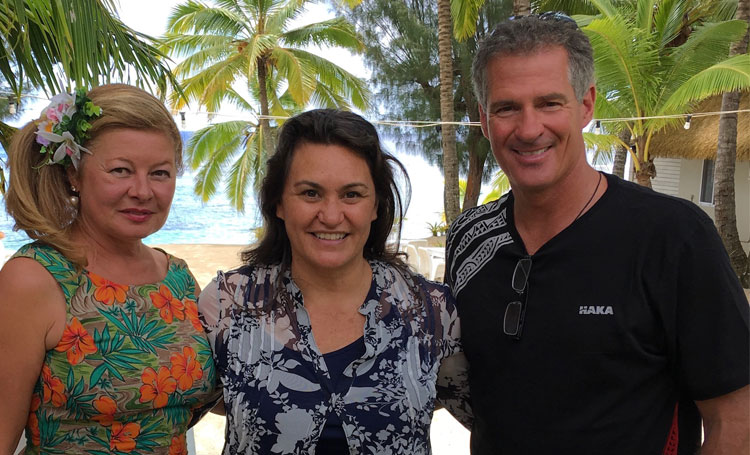 For the next blog in the Pacific Women Leaders series, I met with Jacqui Evans, director of “Marae Moana”.

At the young age of sixteen, Jacqui Evans became fascinated with the beauty of the local marine life of the Cook Islands. Being a local, she would attend school trips to snorkel in the lagoon where she was always mesmerized by the beauty of the coral. These experiences inspired Jacqui to want to commit her life to marine health and sustainability.

“I love watching the Butterfly Fish; they are so graceful and have beautiful colors.  I also love to watch the Parrot Fish graze on the coral,” Jacqui told me during a recent interview I conducted when my husband, Ambassador Scott Brown and I visited the Cook Islands.

She’s followed that teenage passion into her adult life, working as a marine conservationist in Rarotonga. Furthermore, Jacqui now also works as the director of “Marae Moana” within the Office of the Prime Minister. Marae Moana is a multiple-use marine protected area that has a primary purpose of protecting and conserving the ecological, biodiversity and heritage values of the local environment.  More specifically, Jacqui’s job is to help protect the delicate eco-system, while keeping it vibrant for the fishing industry of the local communities.

“I’m passionate about ocean life and protecting it. We have a small population.  We have to learn to develop economically and conserve at the same time. It’s not easy,” she explains.

Having being born in New Zealand, Jacqui’s mother, who is from the Cook Islands, moved the family back to her Rarotonga when Jacqui was young. Jacqui studied marine biology and environmental science at the University of the South Pacific in Fiji.  Her graduate studies took her to the East-West Center in Hawaii. By the time she returned to Cook Islands she was 34 years old.

Much of Jacqui’s professional life has been involved in research.  In her current position, she is helping to integrate responsible management of ocean and fisheries.

“I think we have a future in fisheries, but I don’t think it will ever be our primary source of income for Cook Islands,” she said.

She says one of her biggest challenges is trying to get different agencies to communicate with each other.  Marine shipping, fisheries, tourism, and non-profit organizations need to collaborate with the government to keep the marine park operating. The challenge is that the different groups tend to work within their own disciplines, and not always communicate with one another in order to produce the best result.

Jacqui enjoys working with local fisheries, industry leaders, and her community to protect the precious coral reefs around the Cook Islands.  She highlights the effects of climate change on coral bleaching, which is impacting their coral reefs. She explains how it’s the result of extended periods of higher than normal sea surface temperatures which cause coral to eject symbiotic algae from its tissue. The algae normally gives the coral its color, so then the algae is ejected, it leaves the coral the color of its white skeleton.

In 2007 a bleaching event destroyed much of the coral in Rarotonga.  Since then, Jacqui says the coral is recovering and continues to get healthier but it’s a job that takes constant vigilance.